31st December: End of the road

Well, less than two hours to go before the year ends. I guess I'm running out of options now to find anything new, although I still have a handful of fungi that would benefit from second opinions, and I have a few weevils awaiting the acquisition of the relevant keys. And I suppose I could still hear Red Fox if one was kind enough to yowl in the garden. But to all intents and purposes, that's it.

It's been an incredible year, and I think I've enjoyed the natural history side of 2013 more than any other year, despite spending almost all of it within 500 metres of my doorstep. The final score is (give or take) 1,406 species. I'm delighted to have got the score this high. But the thing one really starts to appreciate when undertaking a venture like this is not how many species you're finding, but how many more are out there being overlooked! How many small flies, small beetles, parasitic wasps, springtails, fungi, lichens, mosses, etc etc etc? There are huge swathes of biodiversity where I haven't even scratched the surface. Gut feeling suggests that the true number of species in the 1 km square could be 5,000, or perhaps even higher. However, I'm not going to try to find the remainder next year! Time for a bit of a rest and a change of scene.

Huge thanks to all the other 1ksq-listers this year, as well as the many others who've helped and supported this adventure. And best of luck to those taking up the challenge in 2014 - go for it, enjoy it, and encourage others to have a go. It doesn't matter what the score is, it's the journey that matters. And pass on the baton to another group in 2015!

I will be thinking about various forms of "write-up" over the coming months, but for now, here's the remaining species I haven't yet blogged. Many of these species are inevitably things I had stored up from earlier in the year but hadn't had time to look at properly. I have now been through everything and my family have their fridge back again! (For a while anyway).

Ganoderma australe - huge bracket fungi that I'd walked past all year without noticing!

Email ThisBlogThis!Share to TwitterShare to FacebookShare to Pinterest
Final Update from TM0025


Well just a little mopping up to bring the list and total up to date at the end of the year. And thanks once more to Andy, and also to all of the contributors for inspiration and encouragement. A happy and fruitful 2014 to you all!

Back to work tomorrow so for me the journey is over, bar a few more late specimen IDs (if I can bring myself to face those click beetles, sawflies and crane-flies that beat me first time around). This month progress was deathly slow until the chrismas break allowed time in the field for a final push. The final month for TG3208 looks like this:

Dec 1st
1094.  Fox - at last, calling at night long enough for me to get out of bed and open the window and rule out deer, dogs, etc
Dec 8th
1095. Teal - another elusive one, flushed from a small pond on the edge of the village.
Dec 11th
1096. Andricus quercuscalicus - full grown larva in knopper gall.
Dec 23rd
1097. Snipe - in stream on edge of village.
1098. Lycoperdon pyriforme - a little puffball.
1099. Weld (Reseda lutea) - somehow missed this earlier.
Dec 27th
1100. Flammulina velutipes (velvet tough shank) - on dying sycamore trunk.
1101. Italian lords and ladies (Arum italicum) - noticed earlier in year but confirmed by autumn flush of fresh leaves.
1102. Ramalina farinacea - the lichen.
1103. Narrow buckler fern (Dryopteris carthusiana) - in Church Fen.
1104. Japanese knotweed (Fallopia japonica) - another plant that has been surprisingly hard to find alive due to a spate of control around the village in the last couple of years.
1105. Small-leaved privet (Ligustrum sinense)- Church Fen.
Dec 28th
1106. Gadwall - on the usually birdless Brundall Broad.
1107. Demetrias imperialis - a notable gound beetle, dug out of a Typha stem at Church Fen.

1108. Scolopostethus thomsoni - a groundbug dug from the same Typha stem.
1109. Hypotrachyna revoluta - a lichen.
1110. Purple small reed (Calamagrostis canescens) - very dead but indentifiable by ruling out all other tall grasses - Church Fen.
Dec 29th
1111. A spider Clubiona neglecta - one of many Clubionas inside marsh sowthistle stems but the only one with an epigyne distinctive enough to confidently identify.
1112. A rove beetle Ontholestes murinus - captured in the summer (from my compost heap I think) but only now identified.
1113. A diving beetle Nebrioporus elegans - another pickled beetle from earlier in the year.

I am sure the 1113 total may shrink a little when county recorders question some critical ID, but I hope not by much as I have tried to err on the side of caution and rejected dozens of possibles/ probables. I don't think I will repeat the challenge next year since I have other things I want to do but I will still endeavour to add records to the 1 km square list, and I will encourage others to have a go and provide support to any who do. My new years resolution will be to continue recording and developing my skills with the groups I have tackled for the first time this year - beetles, bugs and several fly families.

Happy New Year everybody and good species hunting in 2014!

Well, we are near the end of the year, so it's time to look back and reflect. And look forwards and plan stuff.

So, the reflecty bit first. What has finding 1000 species been all about? For me, it has been the most amazing journey of natural history discovery, and also about making new connections, finding out in a deeper way about my neighbourhood, and an almost biblical act of self-improvement. I first opted in around about mid Feb I think, through the quasi-mysterious and intriguing tweetings of Andy and a few others. I knew this was for me, and my first decisive act was to put together some decent reference books and equipment. I now have a shelf full. 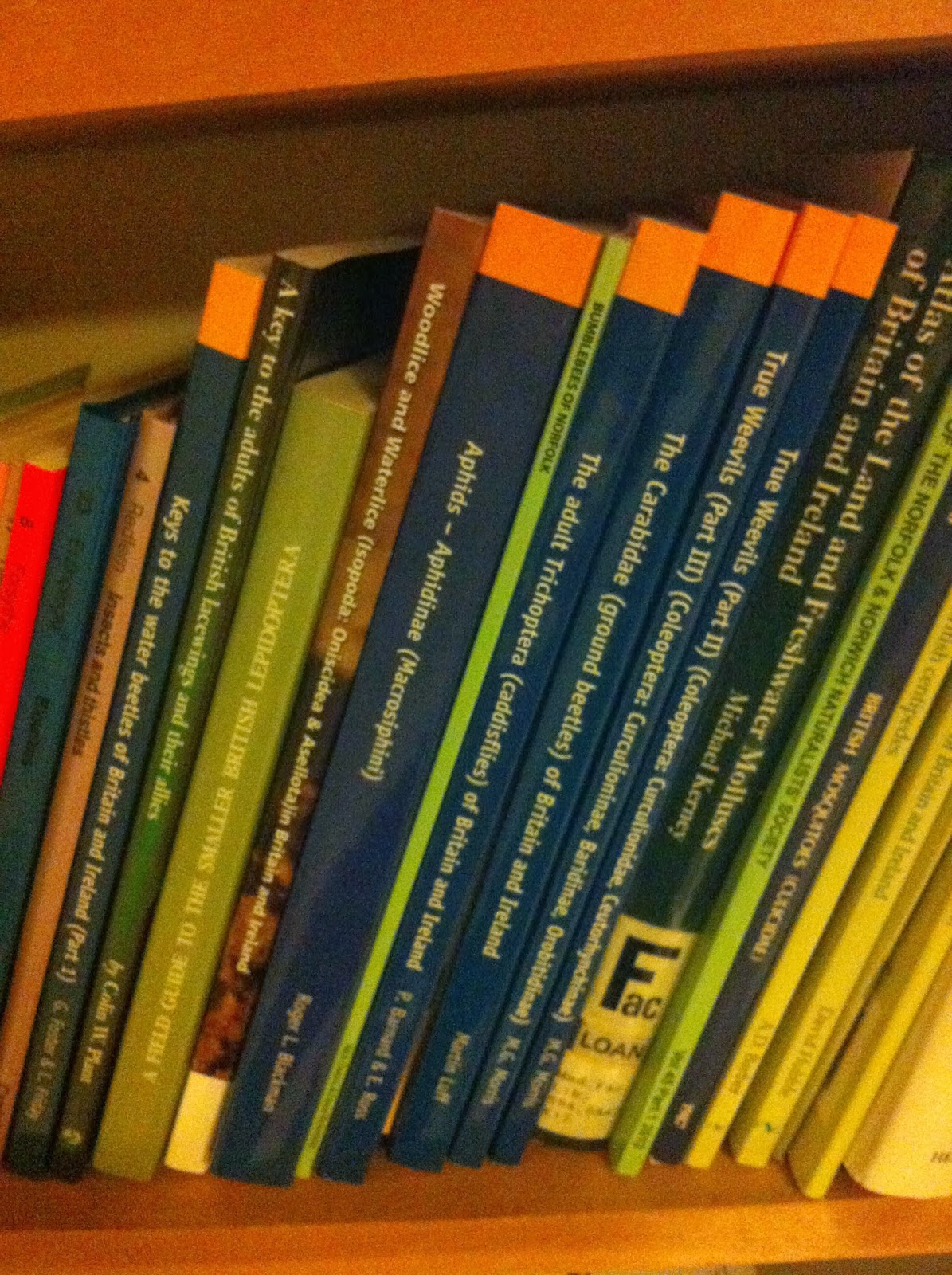 Getting to know these books has been a great learning experience. Next was figuring out how on earth I was going to reach one thousand. I reckoned it would be difficult. My game plans are outlined to an extent in previous posts. But basically I knew that I would have to enlarge my skill base considerably. I couldn't just sit back and rely on my previous experience. Besides, I wanted to tackle new things. It was going to be like exploring.

From then on it was a kind of whirlwind of seasons changing, species coming in, and species fading out.

I don't want to run through the challenge blow by blow, so here's some of the highlights in pictures: 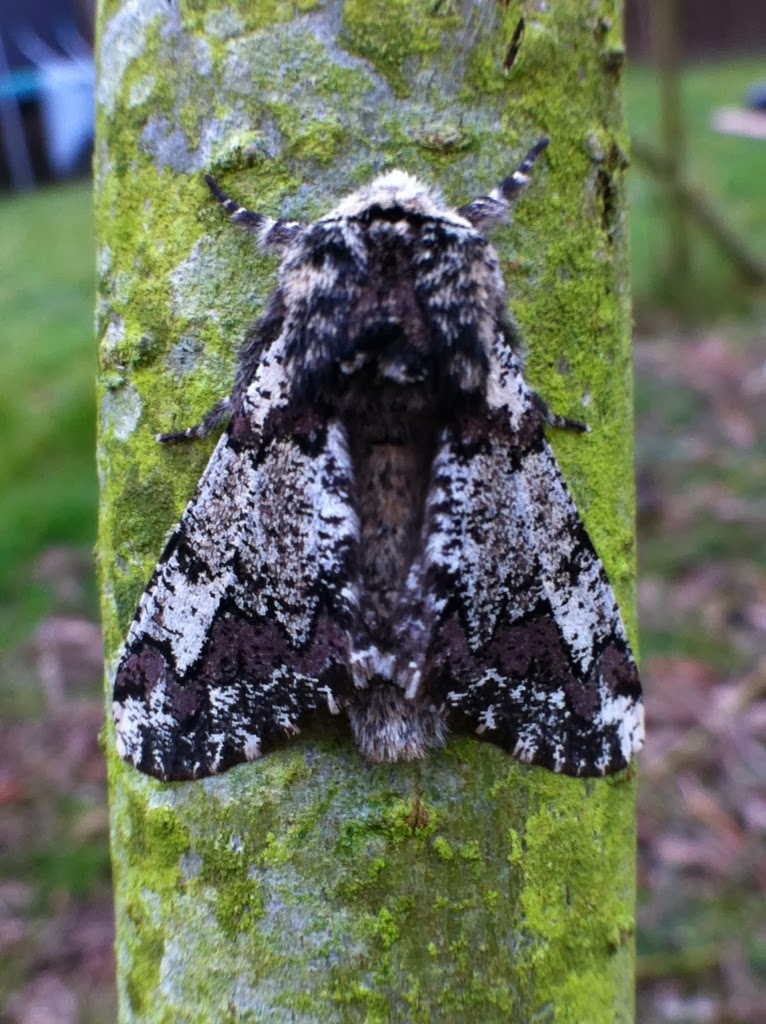 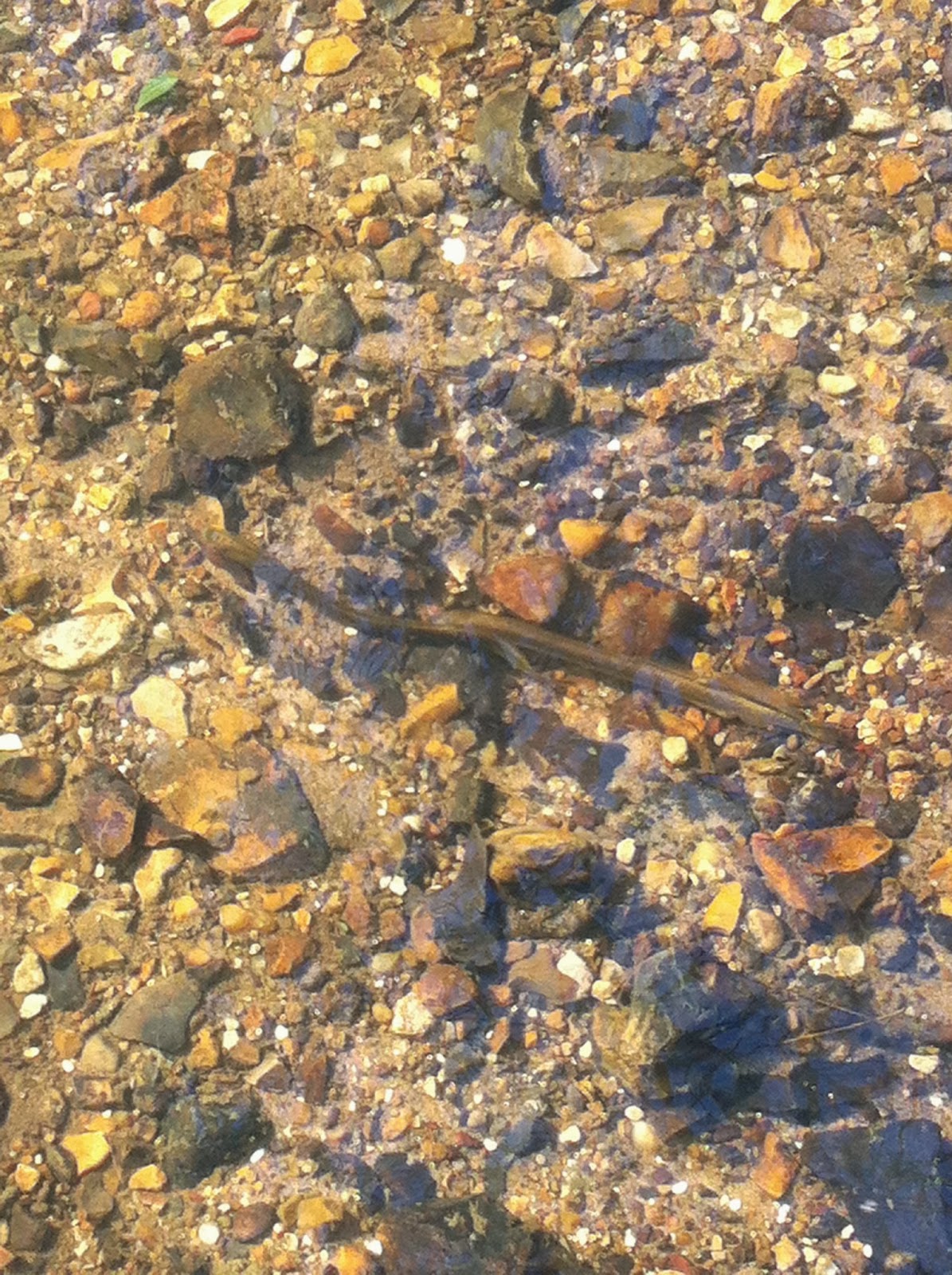 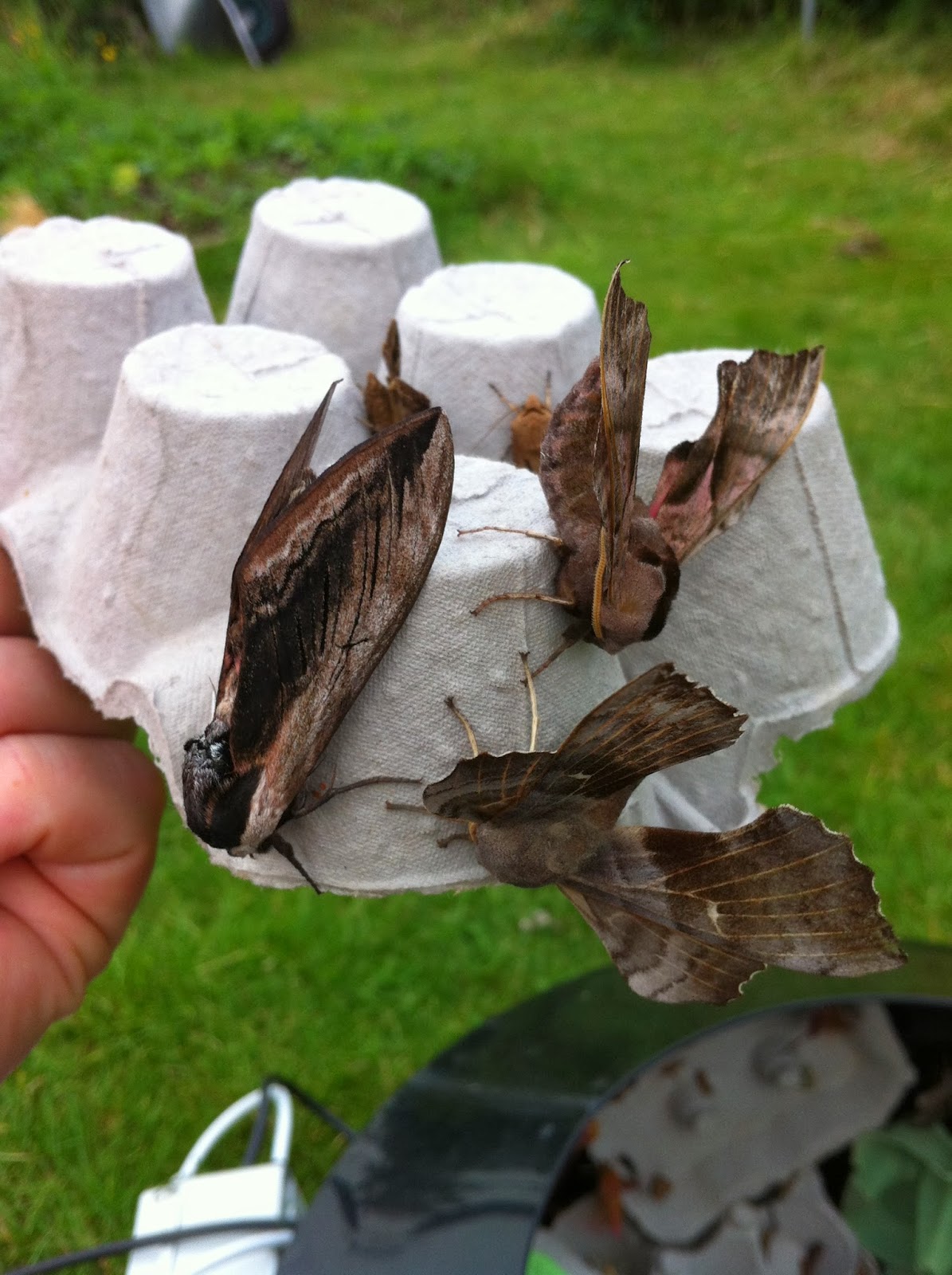 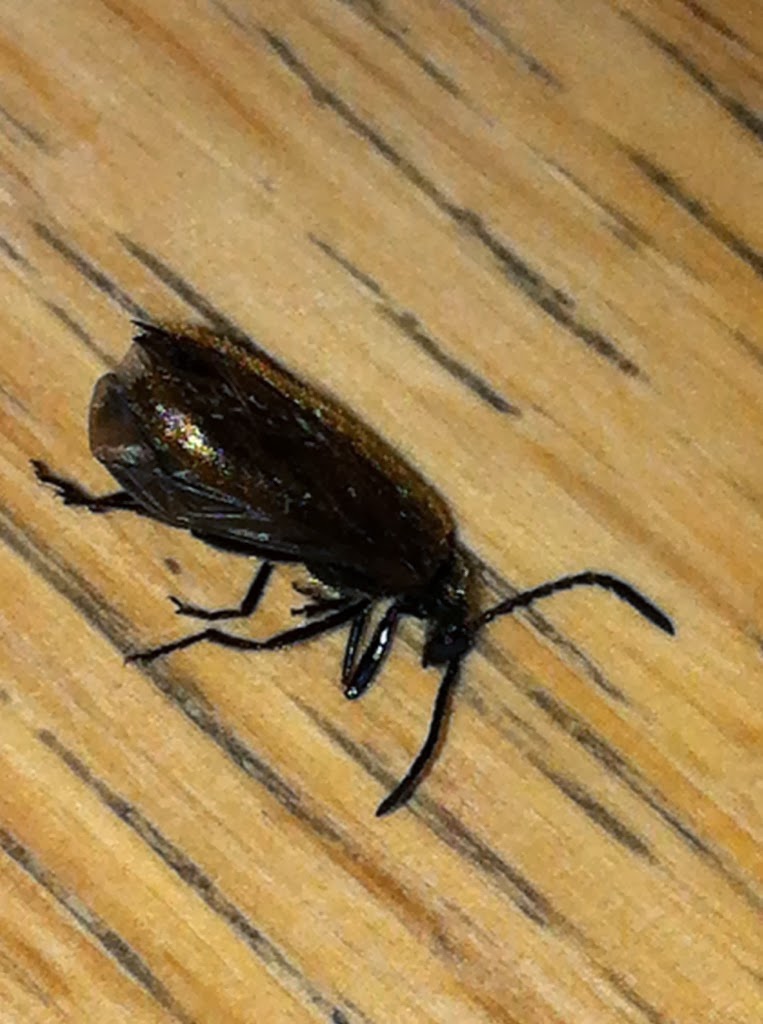 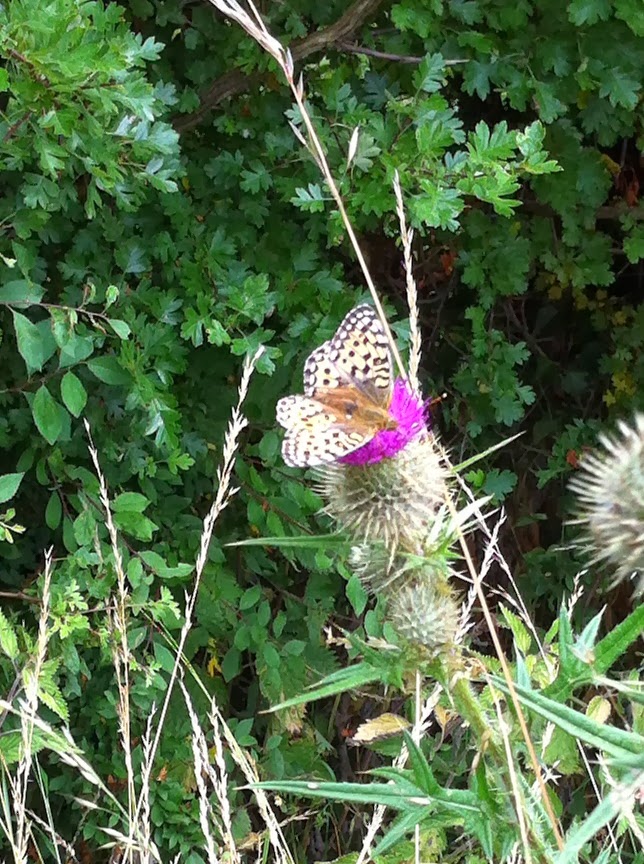 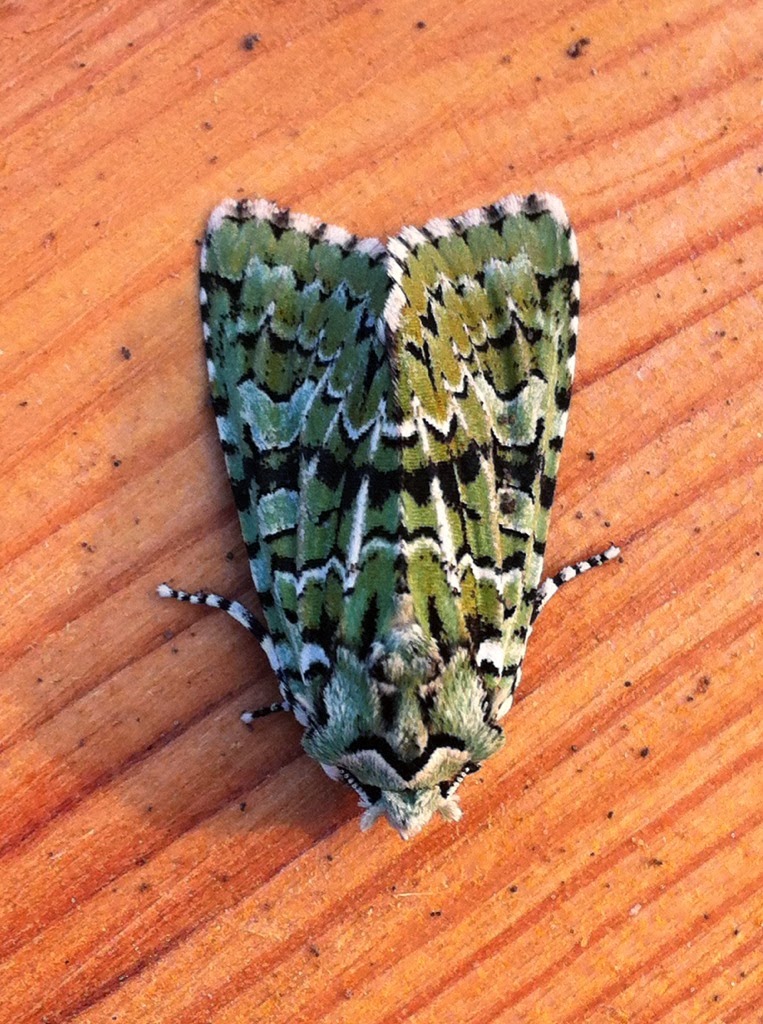 Merveille-du-jour, most wanted moth of the year on Twitter!

And many many others. I discovered the joys of identifying new groups, like hoverflies, spiders, molluscs and ground beetles, and also the frustrations of many groups I have yet to master - hymenoptera, fungi, aphids, springtails and others. These are the future. I found a closer connection with the weather and the seasons. I discovered places that now have a piece of my heart - the green lane, the stream, the ponds, the hedges and the trees.

I thought it interesting to break down my eventual species list of 1170 species into species groups. I think it probably just indicates how large-species-centric I am, but here it is just for the reader's titillation:

So, there it is. Lots more to discover.

Now, looking forwards, I have clearly become a committed pan-species naturalist. I intend to widen my search area and start putting in some time at some of Norfolk's best places for wildlife. I won't forget my home turf, and will keep building the 1k square list. I will pass my records on to Norfolk Biological Information Service. And I will try to encourage other folk to get on board. Inspired and energised!

Yes - still finished. But just to keep the species-logging up to date:

1060 - Black Redstart - one been visiting the garden daily since November. 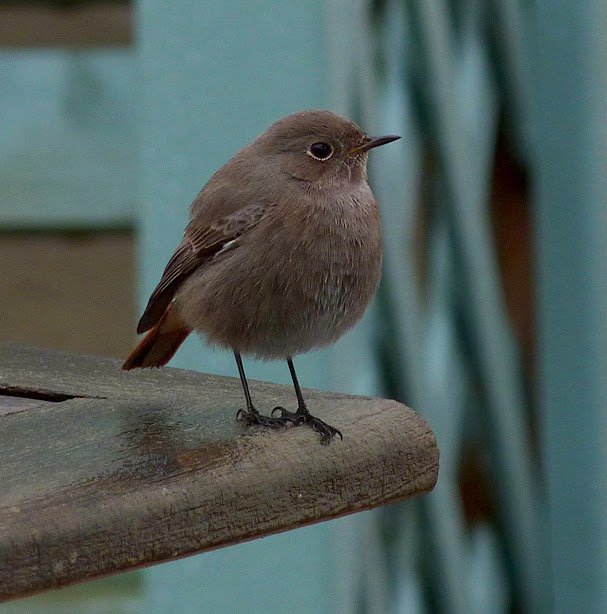 I may have a few moths and other bits left over in the freezer to check out. I did find this beetle that I collected in the summer which may be identifiable perhaps? 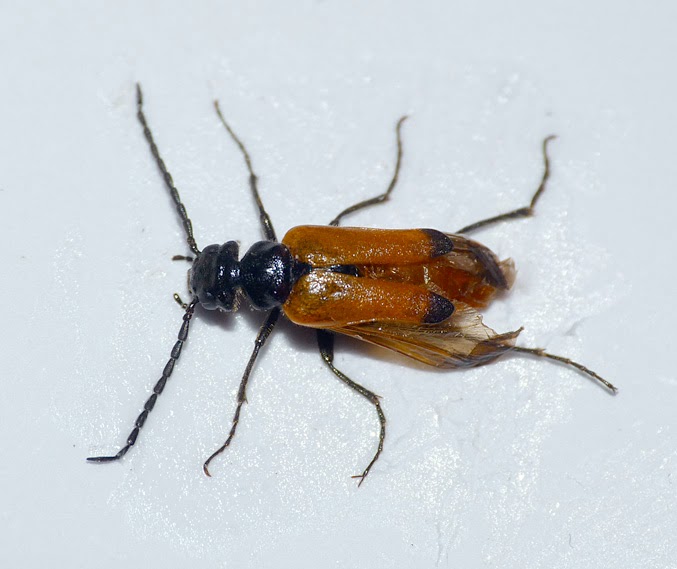 Email ThisBlogThis!Share to TwitterShare to FacebookShare to Pinterest
Labels: GUE
Update from TM0025
With the end of the year approaching and the target achieved, I have slowed down somewhat, so this posting may may possibly be my final entry on the blog. I wait to see if Andy has anything new lined up for next year that will draw me in and consume me. In the meantime, I am planning to gain more experience with lepidoptera and to concentrate on a couple of orders, collembola and psocoptera which I have found quite interesting this year. Anyway, here are the last few species:
Caddisflies
1001. Limnephilus binotatus
1002. Small red sedge, Tinodes waerneri (from earlier in the year)