A good weekend allowed me to stretch out to 450 a couple of days early. Saturday's sunshine brought out a few flies after an early leaf litter sieving session, Sunday brought a fungal outing which racked up some nice fungal wins, and a brief walk yesterday revealed a small area of Willow Carr well hidden from the paths which produced 5 spp. in as many minutes.

I'll stick up a link to the fungi later, because I'll blog them elsewhere, but the willow carr (which I spotted with binoculars!) I knew would have epiphytic mosses. It didn't disappoint.

So I managed to just sneak onto 400 before a brief Highland holiday with the family. A few additions since returning means I'm more or less still in line for 450 by end of Feb. Nice to see the moth trap not empty. Although technically it was, with three Dotted Border on the house walls, all the very pretty form fusca.

I'll be taking a leaf out of Tim's book before month end probably and doing some more sieving. I've had precious little from sieving leaf litter with even what I thought common litter species apparently absent (or my failing eyesight...). Not even a pseudoscorpion.  I still retain hope though, and I think at least partly it's the wetness that's to blame. maybe I'm subconsciously avoiding Tachyporus! 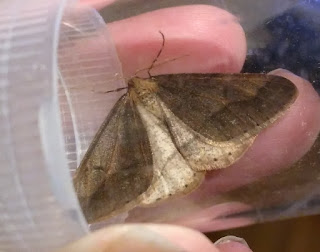 A new moth and a nice beetle

Put my light trap on last night for only the second time this year. Only 4 moths, but one was a Mottled Grey, which is quite a scarce moth in east Norfolk and a new one for me. Was also nice to attract a female Great Diving Beetle, not one I get in the trap very often. 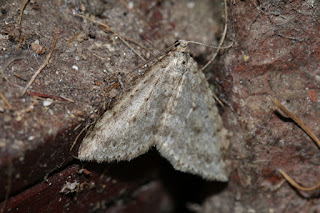 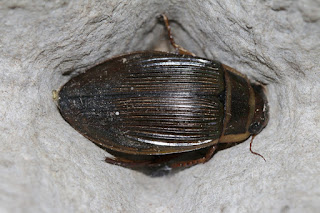 Here's what it looks like. Sorry for the appalling picture quality... 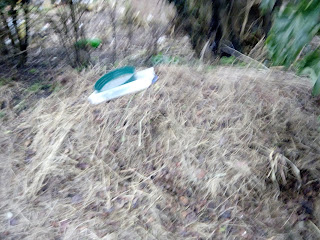 Got a lifer today in the form of the fairly scarce chrysomelid beetle Phyllotreta diademata (male, gen.detted). Beetle number 49 for the garden so far this year. Lots more to come once the weather starts warming up, I hope. Just in case anyone's interested the current 49 are:

Yesterday was a busy day but I managed a quick tour of the woods behind my house before a planned shopping trip. Big "return on investment" there with some expected but not yet sen species ticked and a couple of tree species that I haven't noticed anywhere else. These woods contain some pretty old trees and my understanding is that there used to be a lot more before our houses were built there.

A few seaside additions too, including a new seaweed for me which was identified during a one day conference on recording that I attended on Saturday.

Hoping to get to 400 before I go up north for a few days. You can see from the below chart how fast this year has been so far. CUL is my local SWT reserve and the initial date of 2014 is maintained because of the way the table's set up. 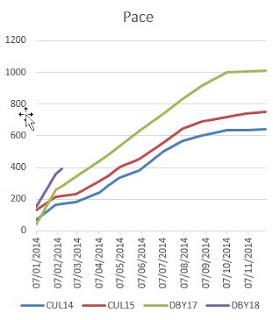 Skye - Third/Quarter of the Way There

Just a very quick update, it is almost 2am after all...

Saturday 10th Feb was my first day off this month, I have Sunday 11th off work too. I blasted around a fair whack of my square, finding a few new millipedes, beetles and the odd harvestman or plant new for 2018.

Anyway, the upshot is that I'm on 337 species, which is just over a third of the way to the 1000 species total and exactly a quarter of the way towards my own target of 1350 species.

Plus I have a fair few samples of bryophytes awaiting ID. Hoping to push forwards to 350 species by the middle of next week. After that I'm off down in England until the start of March. It's a radical slow down, but still ahead of where I was this time last year. Pics to follow at a more reasonable hour...
Posted by Gibster at 1:54 AM 4 comments:

Worms, worms, worms! I think I do, on balance, still think earthworms are tedious. Once you get to the seaside though, everything changes! Marine worms are a varied and very attractive lot.

An amazing brief visit to the intertidal yesterday produced a nice small handful of easy species (edible crab, overflying mute swan), but the evening session was more exciting with 4 out of 4 species being lifers.

It was interesting to put the scaleworm Harmothoe imbricata (big!) with its relative Lepidonotus squamatus. From the books it's not always apparent what different animals they are. The Harmothoe is a magnificent beast as you can see below. Psamathe fusca I thought was going to be something sort of ordinary from the ragworm stable, but once under the lens it revealed its beauty, particularly in its colours as the green and pink resolved with closer inspection.

The worm that broke the mould was a nemertean which I briefly tried to ID as a terrestrial flatworm - it was near the top of the beach. Once it became apparent it wasn't, though, the marine books both held sufficient keys (I hope) to nail it as Cerebratulus fuscus. It was interesting to watch it submerged in sea water. I didn't like this group much either to begin with but they are growing on me, partly because of watching them in action.

All will be returned to the sea today after their brief visit ashore.

Even the seaweed was julaceous today...

Finally managed to visit Eype beach at low tide and was very happy with the result. Completely legitimately within the square there is a good area of seaweed encrusted boulders and even some rockpools. Only there for half an hour (it was decidedly cold and with a bitter wind) but in that time photographed 12 species of seaweed. Not all ID'ed yet but gives me hope.
Also some Honeycomb worms tubes (Sabellaria alveolata), I think? Photo below. 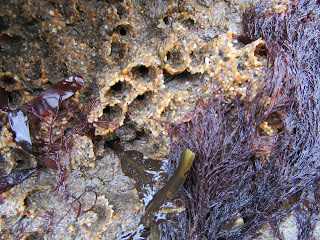 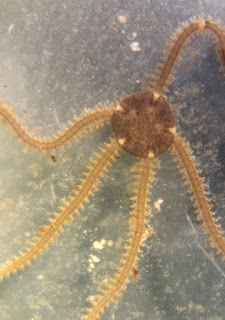 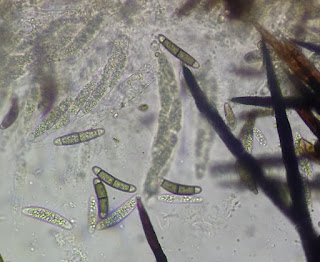 Skye - January Round Up

Everyone else is doing it, so why can't I, as The Cranberries almost said. So here's my January breakdown (numbers, not mental. That'll probably hit me around about September, I imagine).

Total for January is 317 species, not quite a third of the way towards the 1000 species. I've set myself a rather ambitious target of 1350 species in total, which puts me at almost a quarter of the way towards that target. It'll be better when the weather improves and I have a bit more spare time to explore the square in daylight hours.

February will probably be a fairly poor month for me, I'm heading on a two week roadtrip sometime mid-month and I'm still busy at work during daylight hours right up until I head off. Still, 317 is a tremendous start. If nothing else it has Ali all stoked up (probably aiming to hit his 1000 before the end of March, haha!)

Here are a  few of my highlights from January -

Posted by Gibster at 6:56 PM No comments:

So largely thanks to Seth's prompting and pace-setting I finished January on what I would have considered a near-miraculous 341. Now I know with more time it could have been maybe 400. I barely touched the lichens. Fungi have been very kind, providing a large block of the month's 23 lifers. Bryophytes have been a relief after a year working a somewhat dry square with little fresh water.

I usually think of February as a slow month because you've visited a lot of the "permanent" stuff and the spring hasn't got up and running properly. But you never know. I have a lot of seashore untouched and I bet there are easily another 50 fungi I haven't found. Is 500 possible? I'll be more than happy with 450. Last year I wasn't at 500 until April.

'Tis the feast of St.Bridget today so I guess I should go to the ruined church of St.Bridget's. Sunny, too, so maybe the fly tally can get a wee boost. You never know. Maybe even a bee.

For completeness the following are the figures for Eype (Where I really am waiting for warmer weather before the numbers here start to improve)
Mammals 3, birds 37, mollusc 1, plants 80, bryrophytes 6, fungi 2 and lichens 6 which gives 135 in total.

Plus Seth did you see my reply about your Dorset dates?
Posted by Pete Forrest at 7:38 AM 1 comment:

A slower, more sedate, start to the year than the rest of you ended with 160 species recorded for January in the Yeovil square.
Mammals 5, birds 37, moths 3, hemiptera 2, coleoptera 2, diptera 1, hymenoptera 3 crustacea 2, higher plants 54, fungi 14, lichens 25 and bryrophytes 12.

With only 3 species required I thought I had enough in the house to complete the task, even if it meant scouring the shed for spiders. I thought it might come to that when the snow started to fall, but happily the snow vanished and ten minutes into lunchtime we were over the line.

I had intended to pick up a few species I know are in the intertidal and relatively easy, but when I got there I found the tide as high as it can possibly be (at which point my square is 1/2 submerged!). Still the gathered seaweeds did at least give up Vertebrata lanosa. 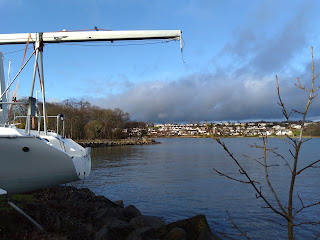 I stuck with the maxim, "The easiest way to find new species is to look in new places" and walked the coastline, quickly picking up Weld and Red Dead-nettle where the grass runs out and becomes sand/rock. A happy find was more Spotted Medick, so it's at both ends of my current square.

The only species I took to the lens in the evening was the lovely Cryptosphaeria eunomia. A nice side-effect of finding this one is that it nudges me into the top ten for fungi on the PSL charts - a spot I've been eyeing for some time!