This time last year I started properly paying attention to the wildlife in my local area, particularly in the 1km square centred roughly on my house.  Then at Easter I got a job monitoring insects in oilseed rape fields in Wiltshire that meant I barely visited the square for four months, and most of the rest of my spare time went to finishing writing up my PhD, so it ended up with a fairly small-scale effort, though I did eventually reach 4,609 records of 1,059 species (with a load more stuff in pots awaiting a spare minute!).

This year, with just one full-time job and a few side projects, I've got the chance to try it properly.  In addition, I start as one of BBC Wildlife's local patch reporters on the 10th February, so I'll be documenting everything I find over the next year.

So far,I've taken advantage of the warm January weather to wander round a few of the local paths, checking on the progress of the floods (most of the top half of the map has been underwater for much of the year so far) and poking through the flood debris.  So far, I've found and identified 221 species in my square: the full list is at https://docs.google.com/spreadsheet/pub?key=0AnHCIn7ZT3T3dDZkX2xTekhja0sxRVFub2NyVURMRVE&output=html but the highlights include four pairs of goosanders and two kingfishers on the lake at bottom right, 16-spot ladybirds in the flood debris, and a water scorpion:

56. Rhyzobius lophanthae (In my garden - still the only known site in Buckinghamshire at the moment I think although it is probably quite common if people looked for it) 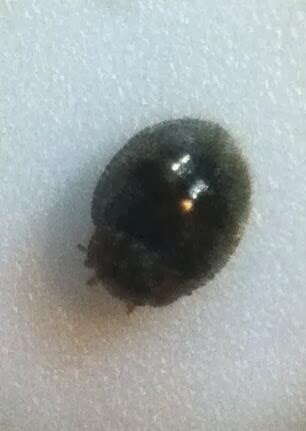 Posted by Ryan Clark at 6:52 PM No comments:

Since the last post from me I have spotted quite a few more species:

I'm now up to 231 which is a bit of an improvement on how many I had last post.

I moved to Horsey last October, having lived and birded in Kent for the previous 43 years - I needed a change! I've been becoming more interested in taxa other than birds and thought that this challenge would help increase my limited knowledge of most insects, plants etc.

TG4523 has a fantastic geographical position, being half a mile from the coast and sand dunes and close to many great Broadland sites including Reydon Marshes, Stubb Mill and Horsey Mere, and the Horsey area is one of the Crane capitals of the country. The square has a range of habitats, with agricultural fields, hedgerows, a few dykes, a small area of woodland, a couple of copses and a small number of houses. Access is not great to a lot of the square but should still be OK to record a large number of species.

I'm sure that birds will be excellent, particularly in passage periods, and so far this year I've already recorded 56 species including Crane, Whooper Swan, Barn Owl, Hen Harrier, Marsh Harrier, Brambling, Little Egret and the thousands of Pink-footed Geese that use or fly over the square every day in the winter. Insects should also be good, with species such as Norfolk Hawker and Swallowtail butterfly almost certain, including in my garden. Dark Green Fritillary is also a possibility, whilst the dykes in the square might attract the occasional otter - they are regular on the Waxham Cut about 200 yards outside the square but probably wander into the square on occasion.

Slow and steady progress in SP8112. I go back to university on Monday and was hoping to find lots of species before then but that doesn't look like that is gong to happen. Here is a continuation of my list so far

Email ThisBlogThis!Share to TwitterShare to FacebookShare to Pinterest
Labels: SP8112

Hi everyone
My name is Helen Ackerman,I'm doing this challenge partly for a school project for the next 3 months but I'm carrying on until the end of this year .i  started my list of species last November but I haven't got that many species yet so must try harder!
At the moment I'm up to 222,and I've still got a couple of fungi to look up that we found this morning.
My square (SO51 17)is situated around our house in welsh newton common which is a little village near Monmouth.
These are a few of my first species:


These were seen from inside our living room on the 1 of November 2013.

Hello everyone,
Firstly I had better introduce my square (SP8112), my square is located in the centre of Aylesbury, Buckinghamshire and is located around my house. I am in my final year of completing a degree in Biology so I will only be able to go looking for new species when I am at home at weekends and the holidays until May when I finish my degree. A couple of years ago I could barely identify birds and mammals, since then I have learnt how to identify common species of a wider variety of groups of wildlife and have started a pan species list.
I especially like recording wildlife in my local area and recorded over 400 species in my garden in 2013. I am also one of the founding members of the Garden Bioblitz which aims to inspire people to record wildlife in their gardens.
One of the main problems I see with my square is the fact that most of it is comprised of private gardens, as you can see on the map above, which I wont be able to gain access to but hopefully I will still find enough habitats to explore.


So today it was the first day of the year and what a miserable day it was. So much so that I only recorded 17 species, all from the comfort from inside the house. I will really have to try harder over the coming days!