So after a two week recovery period in Turkey here's a breakdown of how the total was reached. I'll have to think about my favourites later.

It's been fun. Sometimes exciting, sometimes trying. Sometimes amazingly easy, sometimes very difficult. There were plenty surprises and a full quarter of the final tally were species new to me. That might be worth breaking down too.

I'm looking forward to looking at some neglected places and groups to be honest, but it's been a very rewarding exercise. I'll continue to record a few "extra" species for when species on the list prove to be bulls.. erroneous. Now I'm taking it a bit easier birds are starting to finally trickle in, though with winter thrushes being the latest additions maybe that pool is drying up. 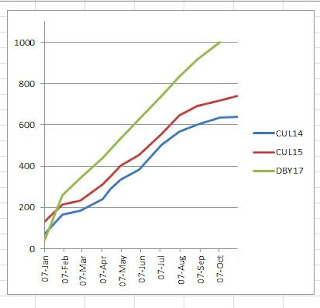 You can see the benefit of working a square close to home/work that's always accessible. The other one is too, to be fair, but I never visited it as consistently.

Here's how the numbers grew by category, 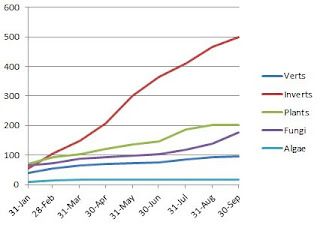 It's not so easy to see how the inverts broke down from this but flies came on strong latterly as moths died away. Moths were severely under-represented really as I only was able to take a serious moth trap on site in the final month. Let's not talk about beetles ... the surge of autumn fungi is pretty obvious though.

The way the numbers moved can be seen reasonably well on here:

Just for luck, some more numbers: