Another enjoyable month of warm - or even hot - sunny weather has flown by since my last post yet I’m still a little way off joining those exclusive ‘1KSQ-ists’ in front of me (as opposed to us remaining ‘1KSQ-ers’ lagging behind). But progress has been steady throughout August and I’m reasonably confident I’ll be pretty close by the end of this month. Moths, hoverflies, nondescript flies and unexciting flora are still keeping the total ticking over and I’ve finally found a few more smallish invertebrates without really trying too hard. 'Tricky' ground beetles seem to keep deliberately avoiding me (thankfully!), as opposed to house spiders which are getting bigger every day here in the workshop (a.k.a. my seasonal abode) in TQ6410. Sooner or later I’m going to end up swallowing one of these eight-legged monstrosities when I’ve dozed off. Meanwhile, I’ve recently had another minor blitz around the square including the Herstmonceux Castle grounds – for missing plants mostly – but these are becoming ever harder to find now the summer’s almost over (although blue skies and hot weather are still the order of the day here in early Sep). A lot of grass-cutting’s also in progress away from the plot - and the neighbouring farmland’s just been totally zapped, if the brown, rolling, former grazing fields just to the north of my plot are anything to go by. My local farmer has also drained and re-graded the damp part of the field by the little ditch nearby – so no more Snipe or Green Sandpiper this winter - in common with the grubbed-out Nightingale scrub to the south of the Castle which disappeared earlier in the year. He’s even filled in a section of watery ditch (and piped the little stream) where it does a 90degree westward turn …. all to make life easier for his intensive, non-organic dairy herd. I reckon my five acre plot now has about x100 the number of species to be found in the several hundred acres of wildlife-devoid farmland next door. Farmers are supposedly our guardians/custodians of vast tracts of countryside but wildlife conservation and species preservation come a pretty poor ‘last’ in the litres per metre mentality elsewhere in TQ6410. 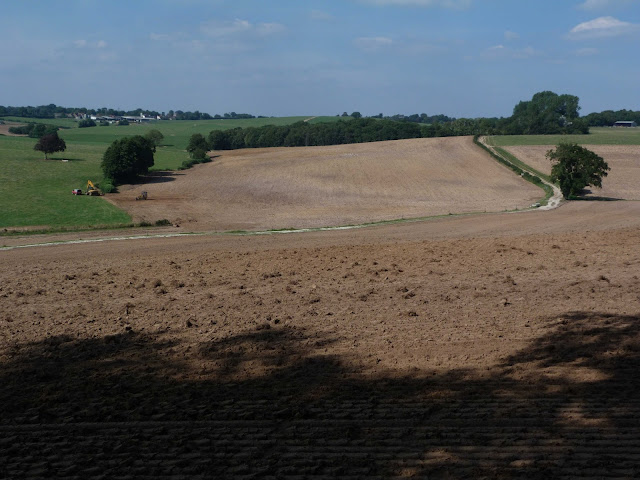 Farmland, bridleway and little ditch just to the north of the plot - species-devoid for a while yet .... 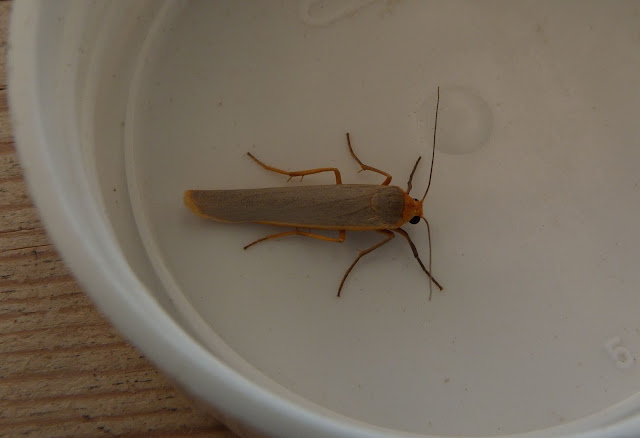 12th Aug - around the plot:
865 - Weasel Mustela nivalis twice ran across the grassy area between wild flower bank and plant benching (and disappeared into rubble under benching). Still no hedgehog though ….
866 - Common Green Lacewing Chrysoperla carnea 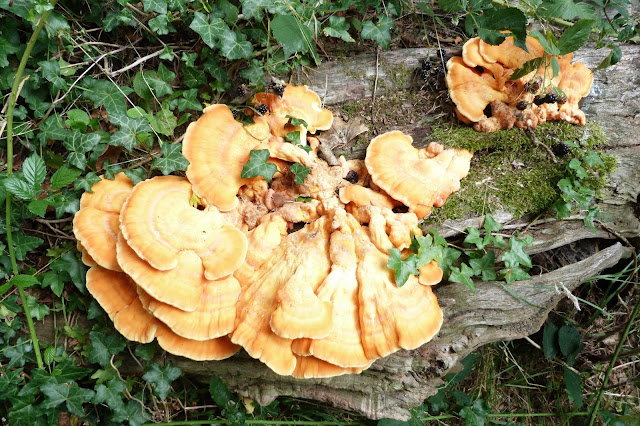 868 - Sulphur polypore Laetiporus sulphurous …. an alien-like face at one end of the old oak log seat ..... and looking into the workshop! Another massive sulphur polypore (above) has taken over the other end of the old oak log in the past week or so. If it carries on at this rate it’ll soon be taking over the workshop too ....
869 - Club-horned Sawfly Abia sericea  photo’d back in early June but overlooked until I also found a larva (now just pupated) on Devil’s Bit Scabious
870 - Hypsopygia glaucinalis (micro-moth)
871 - Oak Hook-tip Watsonalla binaria
872 - Bryotropha senectella (micro-moth)
873 - Diamond-back Marble Eudemis profundana (micro-moth)
874 - Lychnis Hadena bicruris 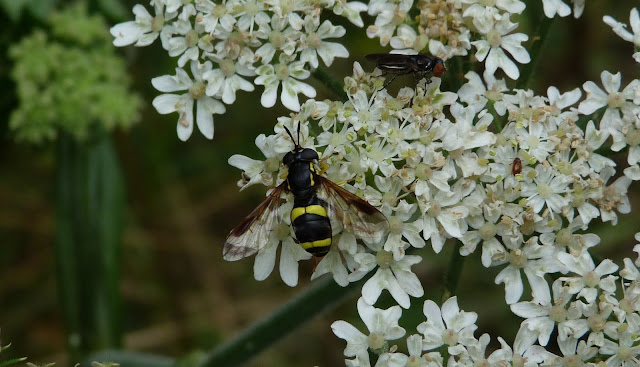 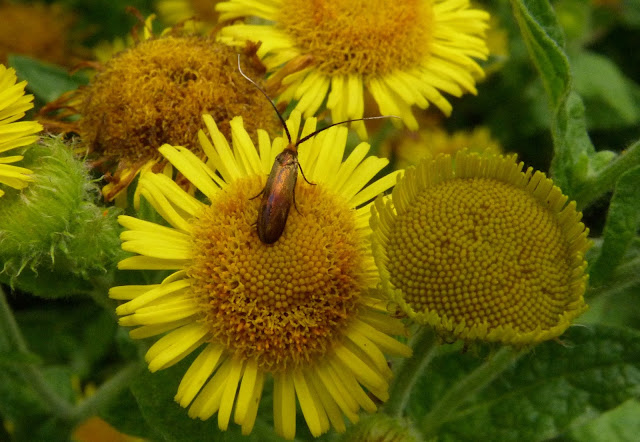 878 - Coppery Longhorn Nemophora cupriacella (above)  quite a rarity here in East Sussex or just under-recorded? Confirmed via my photo by the County moth recorder, Colin Pratt. 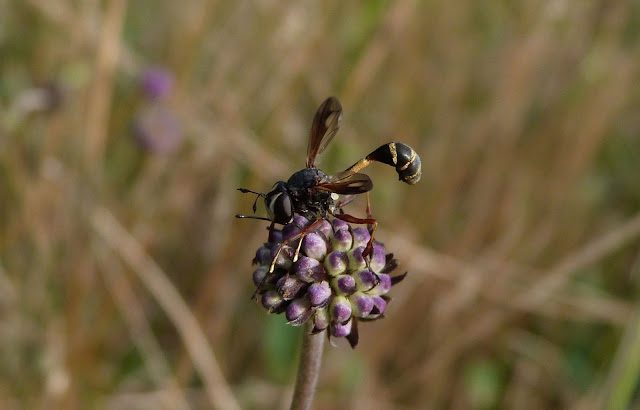 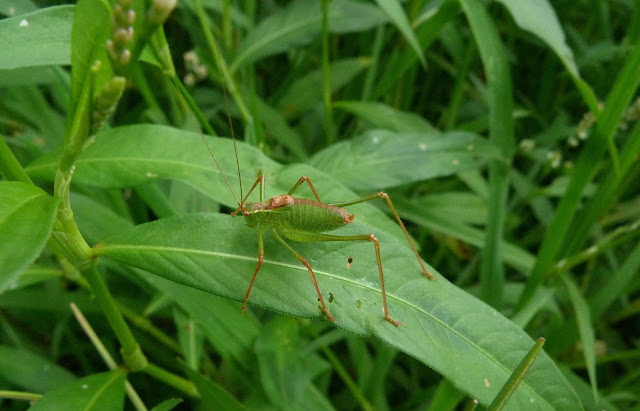 23rd Aug - Around the square and plot:
899 - Black Horehound Ballota nigra a small, smelly clump in the corner of the field by the church 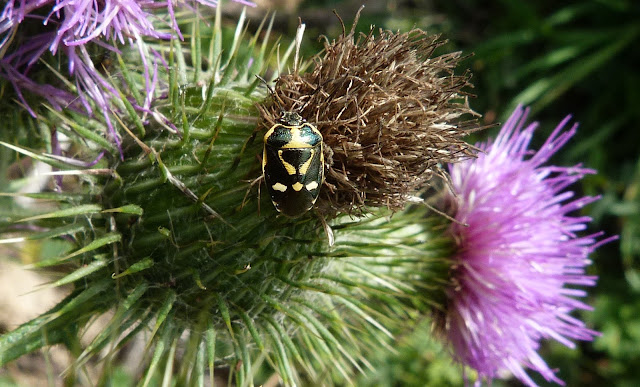 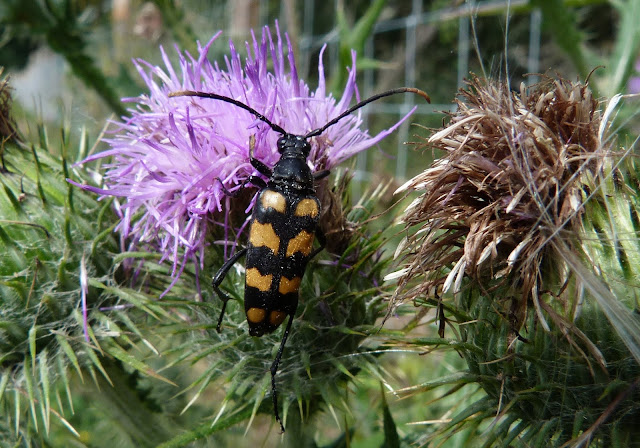 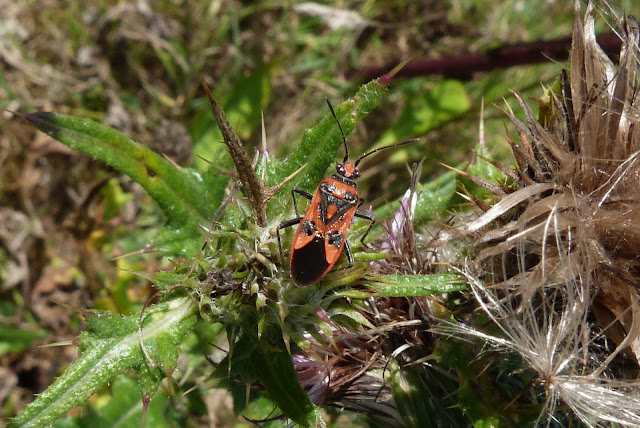 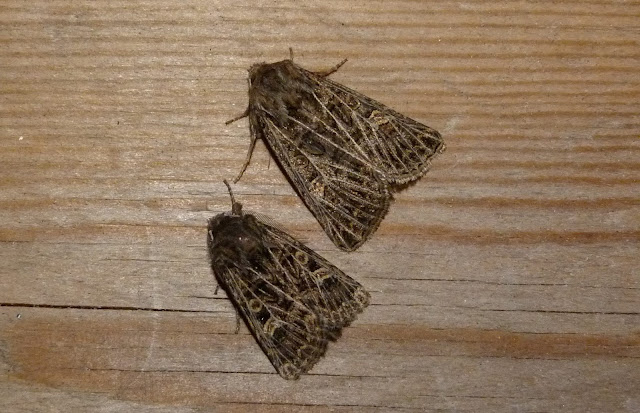 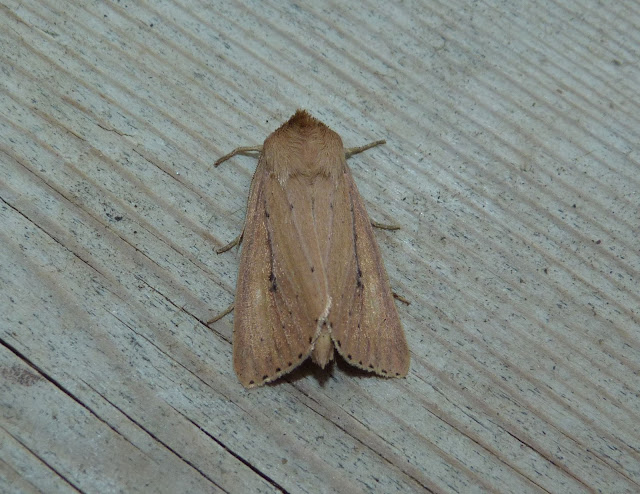 933 - Webb’s Wainscot Archanara sparganii (above) a bit pinker in the photo than it actually was. Caught it over a week ago but pondered over the ID for a while .... confirmation? 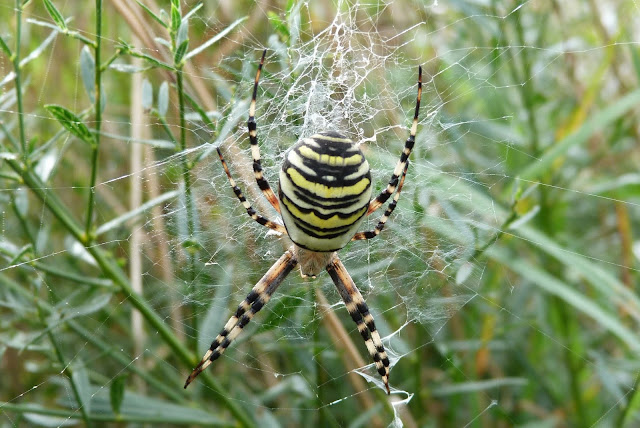 1st - 2nd Sep - around the plot:
934 - Wasp Spider Argiope bruennichi (above) biggest one yet … low down in the little wild flower bank. Lock up your cats, dogs and small kids ....
935 - Giant House Spider Tegenaria duellica (ID assumed by SE location) prowling around my workshop office. Eviction notices have been served ....
936 - Tachinid fly Dexiosoma caninum on stinging nettle at the plot
937 - Field Bindweed Convolvulus arvensis further along the arable field edge (and amazingly not on my list)
938 - Harvestman Phalangium opilio doing a runner across the grassy, flowery, lower meadow