Our ‘Slow but Sure’ bird-race team for next month’s RX event (the coastal area between Hastings and Dungeness) is so-called as we’ve shunned cars for the past two years and elected to walk all day, apart from using vehicles to get us to our Hastings Country Park starting-point and back again from Rye Harbour. Of course, we never get anywhere near to Dungeness or to a host of other good birding spots locally - far too far to walk - but we’ve still managed to get over 100 species each time. The ‘Slow but Sure’ label could almost apply to my 1KSQ effort too. It’s been ‘slow’ right enough (apart from an initial rush with plants which I could mostly ID via the leaves) but it’s hardly been ‘sure’ - especially when it comes to ID-ing dodgy beetles, spiders and hundreds of other barely visible invertebrates and other microscopic life forms. I’m still giving springtails, galls (apart from knoppers), leaf-mines - and quite a lot else - a fairly wide berth but I’ve stuck with butterflies and moths, odenata and plants, easy to identify invertebrates … and my new fascination with hoverflies. Fungi are also proving tricky (lots of photos though) .... I was doing OK with birds with almost 90 species but these have all but dried up in recent weeks and my last ornithological contribution was Sand Martin on 30th June. I’ve got most of the expected stuff but am still missing Little and Barn Owl, Stonechat, Spotted Flycatcher, Yellow Wagtail and one or two other pretty common local species. Peregrine, Marsh Harrier and Short-eared Owl have also all been seen regularly in the next square(s) during the autumn months and Hen Harrier and Red Kite have both flown over the plot in previous years. Any of these raptors would be great for my 1000th species but the likelihood is that it’ll be yet another little brown moth, some obscure plant I’d completely overlooked or a dubious spider or fungi ID.

Another thirteen new species should finally get me past the elusive 1000 barrier sometime very soon … and maybe normality will slowly return to a post-1000-species, rustic way-of-life here at the plot. Did I say ‘rustic’? Aha - Autumn Rustic must be due any day now! I’m not saying this 1KSQ Challenge has got to me a bit but strimming the paths around the plot last week with bins AND Lumix hanging around my neck was just bordering on the ridiculous. Patrick Roper must be wondering locally what all the fuss is about given that he’s been recording a 1m square in his back garden for the past decade (over 700 species to date) …. Mightily impressive but how does that work with flyover birds …. and is there a similar psychological impact that some of the 1KSQ-ists have been trying to shake off since reaching 1000 species this summer? 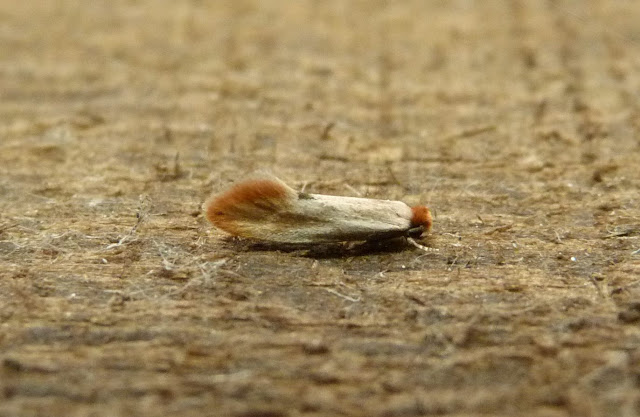 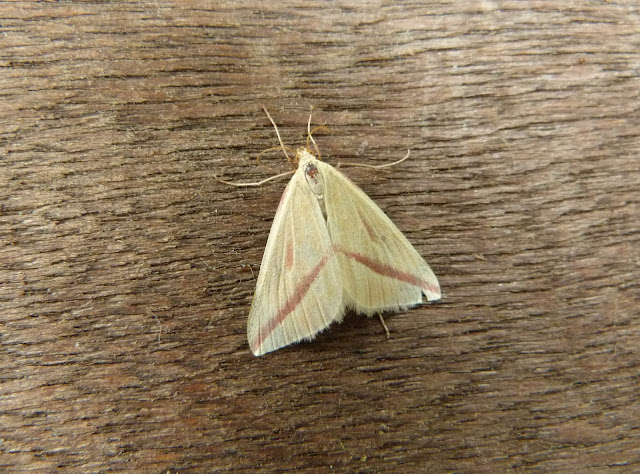 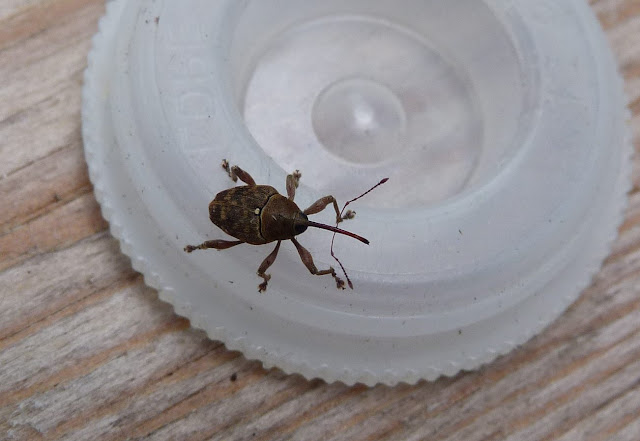 5th Sep - at the plot:
952 - Straw Underwing Thalpophila matura landed on (hit?) the van windscreen just as I drove up to the plot the other evening. When I checked out another strange object under my windscreen-wiper yesterday morning (15th Sep), it turned out to be a Pipistrelle (deceased). Sorry …..

7th Sep - around the plot and square:
953 - Pale Persicaria Persicaria lapathifolia along the wet woodland edge and in the former nightingale scrub (the latter now re-seeded for yet more grazing). I’d photo’d the two Persicaria species together some time ago but overlooked an ID until Rob Yaxley’s recent report reminded me. Thanks for that one Rob!

8th Sep - around the plot (or rather around the bramble, fleabane & knapweed patches for the 35th time this summer):
954 - Pellucid Fly Volucella pellucens basking on mouldy blackberries in the upper meadow
955 - Hoverfly Xylota sylvarum flitting to and fro over bramble leaves while I was picking (non-mouldy) blackberries
956 - Hoverfly - Platycheirus scutatus
957 - Ground Beetle Amara aulica (below) caught in the act - feeding on a Lesser Knapweed flower/seed-head - and unable to hide the evidence! 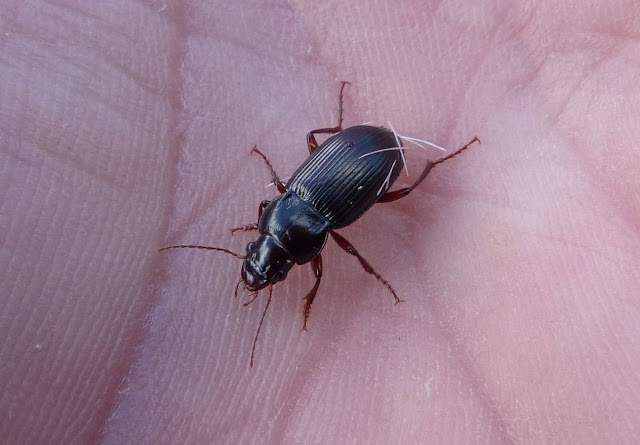 958 - Hoverfly Sericomyia silentis (below) swamping a Devil’s Bit Scabious flower. A rather unexpected visitor … and needs to go on a diet.  Another one two days ago by the little ditch .... 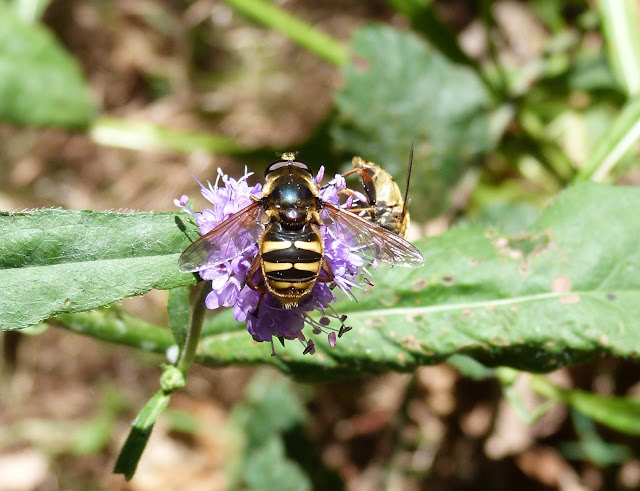 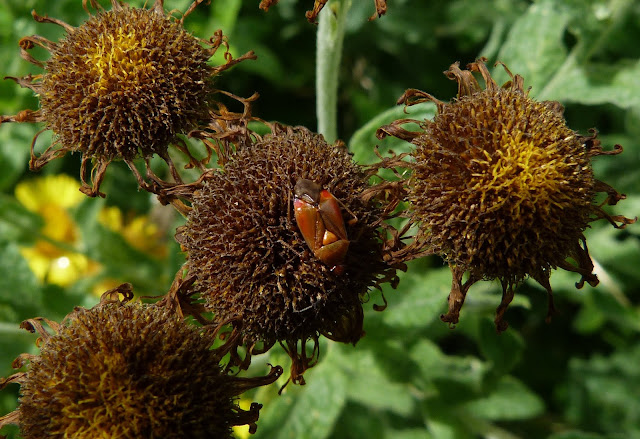 963 - Field Damsel Bug Nabis ferus on Fleabane in the lower meadow on 23/8
964 - Knopper Oak Gall wasp Andricus quercuscalicis These sticky oak galls are widespread and very numerous on all the many re-generating pendunculate oaks on the plot here .... 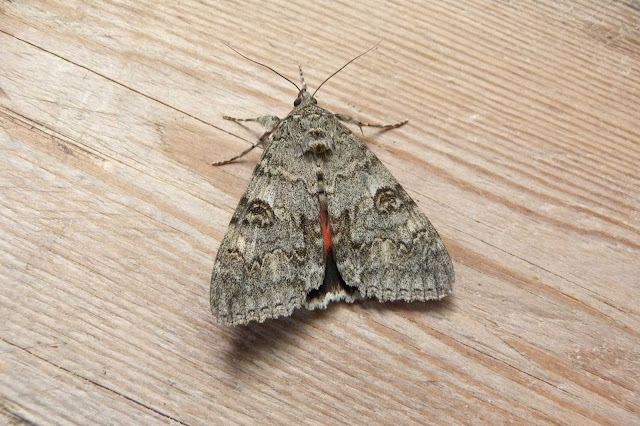 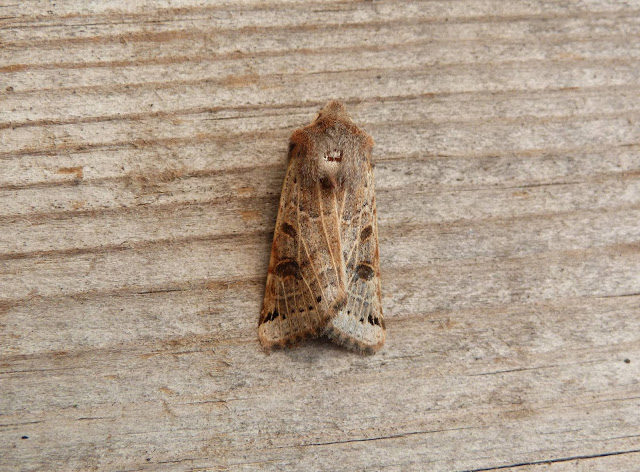 15th Sep - along the wet woodland edge (a consistently productive part of my 1km square):
978 - White Willow Salix alba just inside the wet woodland …. missed this one despite repeated visits here …
979 - Vapourer Orgyia antiqua (larva - below) on an alder leaf alongside the wet woodland-edge … rather bizarrely as I thought I’d probably see the moth today (but didn’t) …. 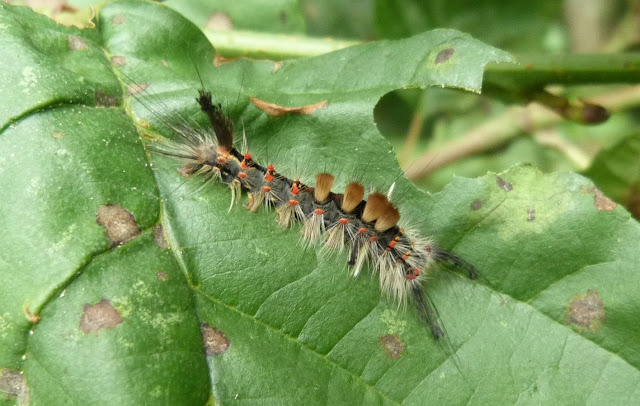 980 - Tomato Solanum lycopersicum (below) …. seriously! A plant about 60cm high by the ditch on the edge of the wet woodland (complete with a couple of decent-sized green tomatoes). This arable field/woodland-edge is quite remote and a long way from habitation - even the public bridleway runs along the opposite side of the field. Must have been dropped by a fox or badger or maybe the tractor driver chucked out one of his cheese and tomato sandwiches last year while cutting the field. One of the more unexpected finds of the year so far and undoubtedly my ‘find-of-the-day’ today - I've propped it up with a dead hogweed stem …. 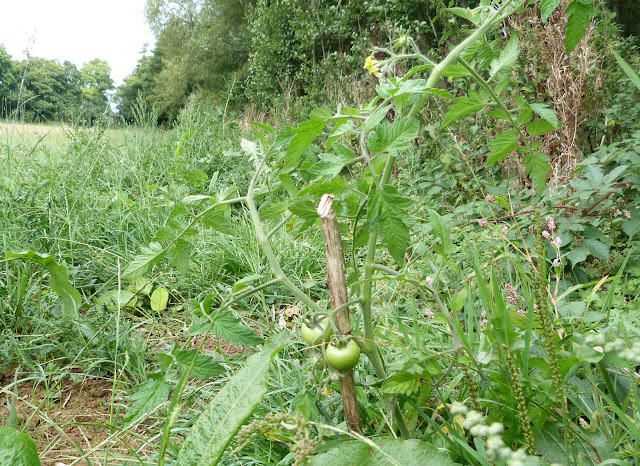 981 - Garden Spider Araneus diadematus spiders are going to have to figure more and more on this list …… at last!
982 - Chequered Hoverfly Melanostoma scalare on Fleabane in the wet woodland-edge ditch ….

16th Sep - around the plot:
983 - Field Mushroom Agaricus campestris first one of the autumn in the grass by the picnic table (appropriately enough). Can confirm its edibility but just in case if you don’t hear any more from me with the 1000th species looming ….

17th Sep – around the plot:
984 - Sulphur Tuft Hypholoma fasiculare (below) on a fallen dead branch in the bluebell wood 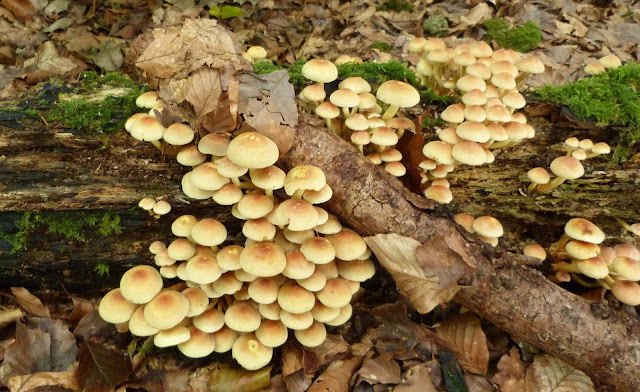 985 - Parasol Mushroom Lepiota procera in the meadow - just pushing up through the long grass
986 - Dewberry Rubus caesius in amongst all the other blackberries in the front meadow
987 - Woundwort Shieldbug Eysarcoris venustissimus (below) - several ladybird-size nymphs on Hedge Woundwort in the front meadow as well as the adult shieldbug on a nearby nettle .... 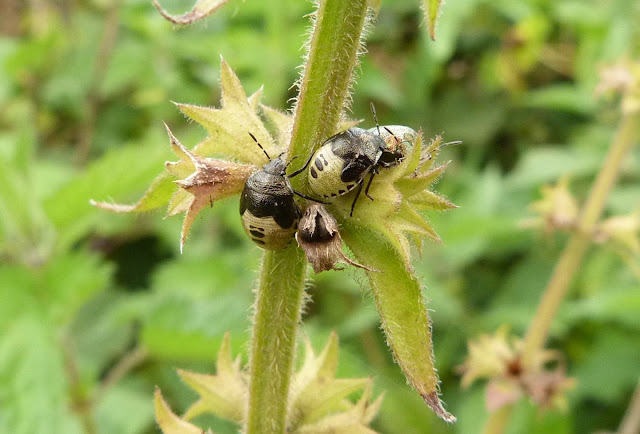