Well, it took almost nine months but I finally came to the 1KSQ party and staggered past the 1000 species target at the beginning of last week. I’d originally thought that 1000 by the end of September would be pretty good going so to get there with a week to spare was something of a relief, even if it was all a bit of an anti-climax and a distinct feeling of turning up at the party after everyone had gone home! Stuck on 999 species for 24 hours, I even trekked around the fields locally late last Sunday evening looking for the long lost TQ6410 Barn Owl but in the end had to settle for a rather underwhelming Spiny-handed Dung Fly (don't tell me it's not?) in the bramble patch on Monday morning …. and even that looked like it had taken up shaving. I also notched up my 300th ‘lep’ in the square this past week - Green-brindled Crescent was (shamelessly) my 273rd moth to go with the 27 butterfly species so far this year (Green Hairstreak and Brown Argus are still missing from the list although both were seen on the plot last year). And so after nine months of relentlessly foraging around my plot and 1km square, it’s great to think I can finally relax a bit now, do some other vital stuff, get on with some more work …. or even creosote the workshop. If I thought this square was going to be good for plants, butterflies & moths, odenata, various other invertebrates and birds (it was), then it’s certainly looking good for fungi too so I won’t be sitting on my laurels for the next couple of months. About a third of the square is wooded in some shape or form, much of it in the neighbouring Herstmonceux Castle grounds and a staggering variety of fungi have recently sprouted up all over the place (and a recent moss survey has also provided an interesting list of species for me to search out there too). The regular parasol patch in the upper meadow here has already come and gone (a bit squidgy when fried but check for fox pee first) but elsewhere around the plot – particularly in the little bluebell wood and along the bridleway and woodland edges - fungi seem to be appearing daily. So all I have to do now is ID a decent chunk of them all ….. if only!

21st Sep - around the plot, bluebell wood and in the moth-trap:
988 - Median Wasp Dolichovespula media only recently ID’d from some photos taken on 13th Aug
989 - Birch Shieldbug Elasmostethus interstinctus on a bramble leaf in the upper meadow
990 - Meadow Puffball Lycoperdon pratense several in the upper meadow
991 - The Blusher Amanita rubescens several in the little bluebell wood (silver birch)
992 - Blackish-purple Russula Russula atropurpurea under sweet chestnut near the Castle grounds
993 - Field digger-wasp Mellinus arvensis feeding on a Greenbottle on bramble plus this one (below) 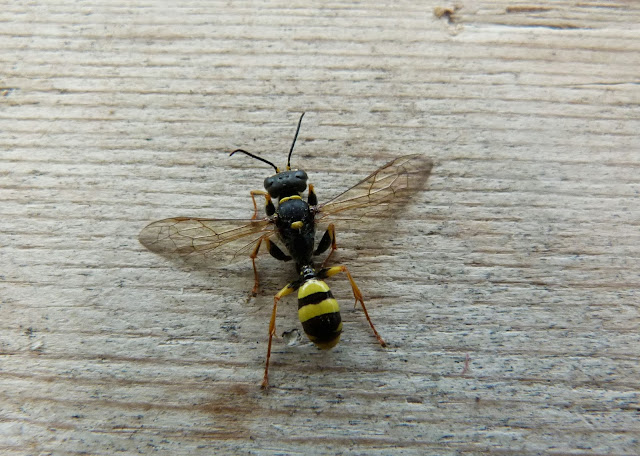 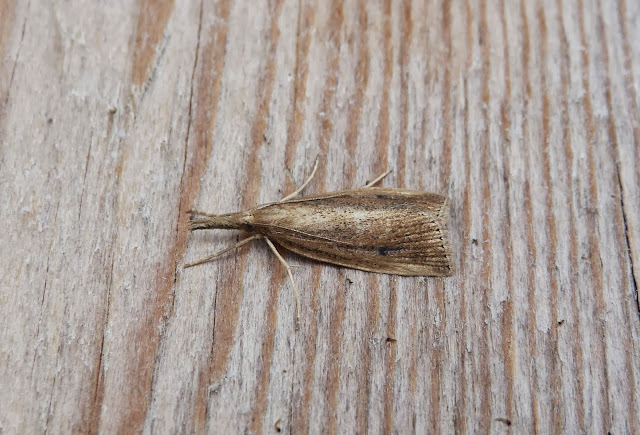 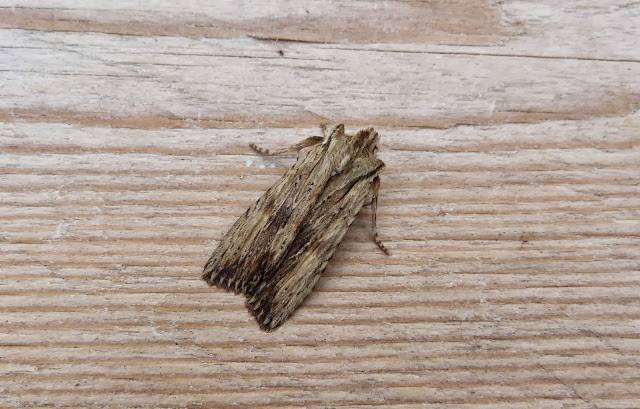 23rd Sep - around the plot: That eureka moment ? 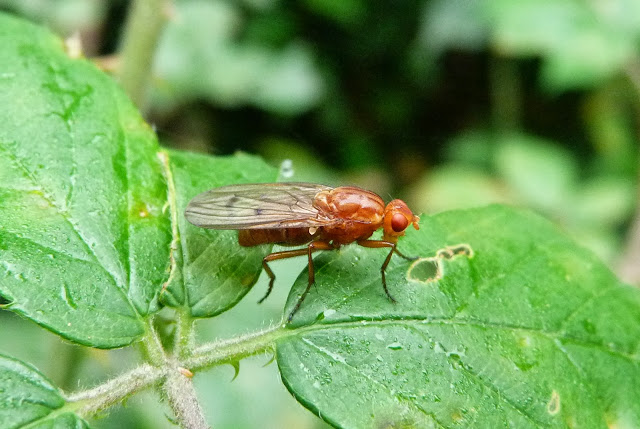 1001 - Four-spotted Orb Weaver Araneus quadratus in vegetation in the lower meadow
1002 - Rhomboid Tortrix Acleris rhombana (micro-moth - below) ….. in the moth-trap 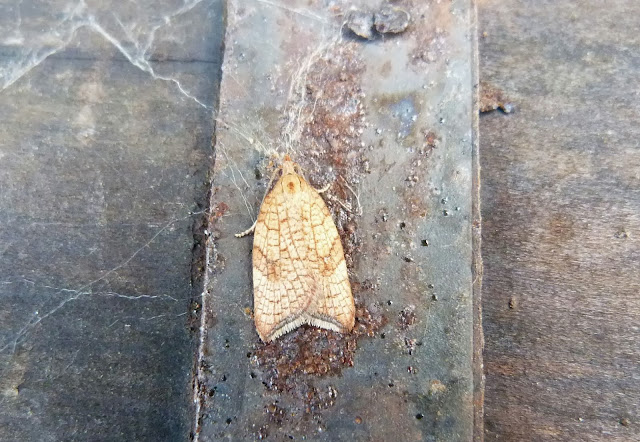 24th Sep - around the plot and square:
1005 - The Charcoal Burner Russula cyanoxantha along the bridleway south of the Castle
1006 - Crab Spider Xysticus cristatus Photo’d way back on 20/4 but only just ruled out Xysticus ulmi (largely absent from SE)
1007 - Cranefly Tipula oleracea frequently inside the workshop
1008 - Common Backswimmer/Water Boatman Notonecta glauca netted out of the little ditch nearby
1009 - Backswimmer/Water Boatman Notonecta baculata …. ditto (below) 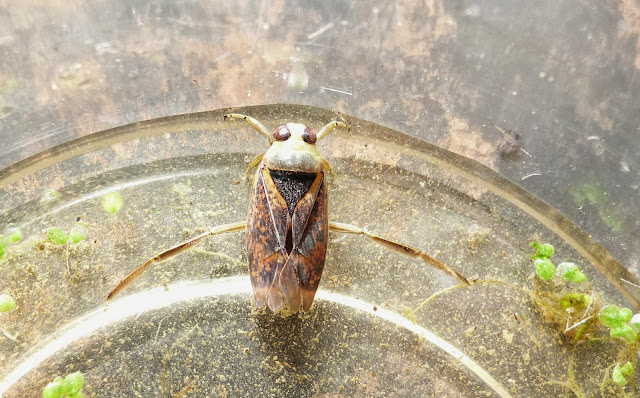 25th Sep - around the plot and in the moth trap:
1011 - Hoverfly Rhingia rostrata on the Devil’s Bit patch in the lower meadow
1012 - Spider (jumping) Sitticus pubescens on vegetation in the wild flower meadow pots
1013 - Tortoise Shieldbug Eurygaster testudinaria (below) on Devil’s Bit Scabious in the front meadow 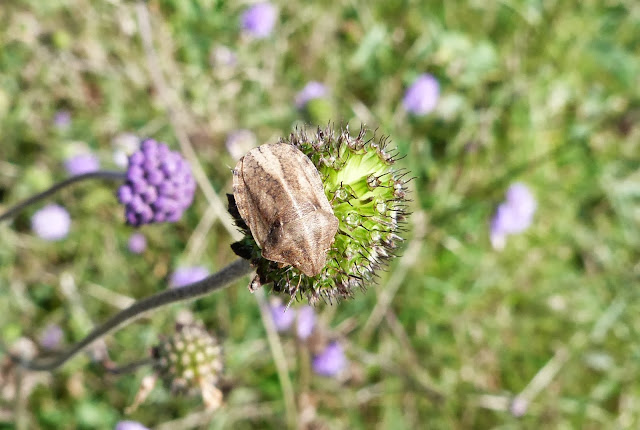 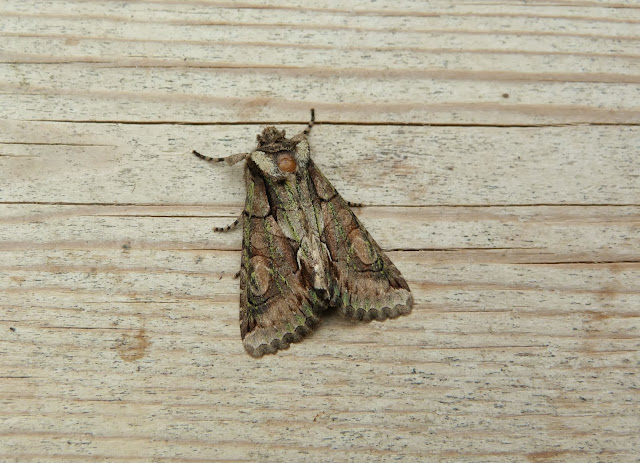 1015 - Wood Gnat Sylvicola punctatus on top of the moth trap 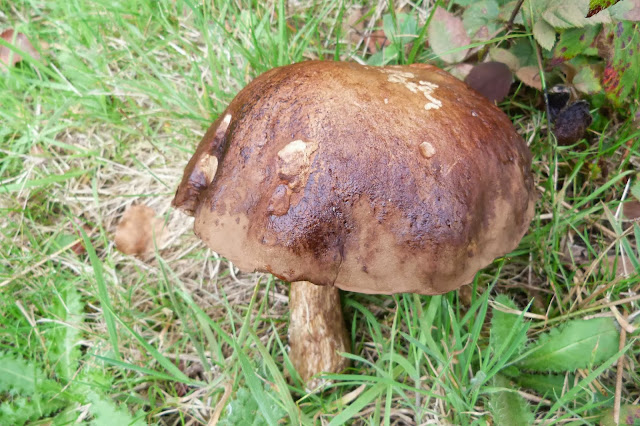 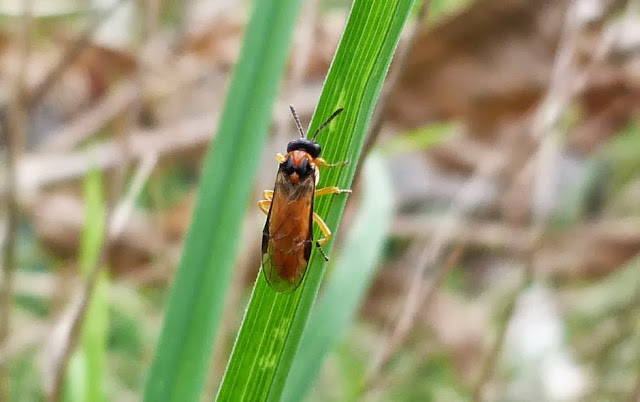 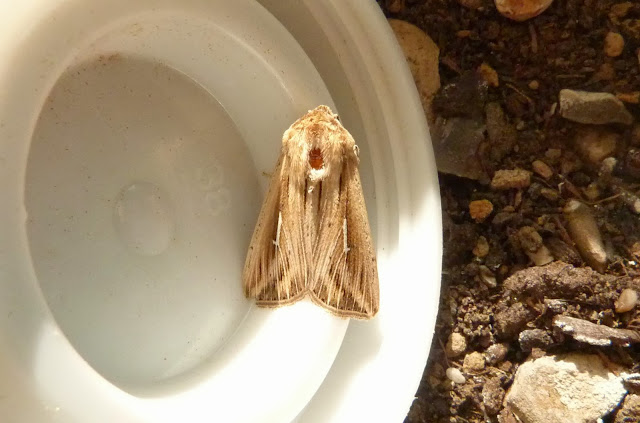 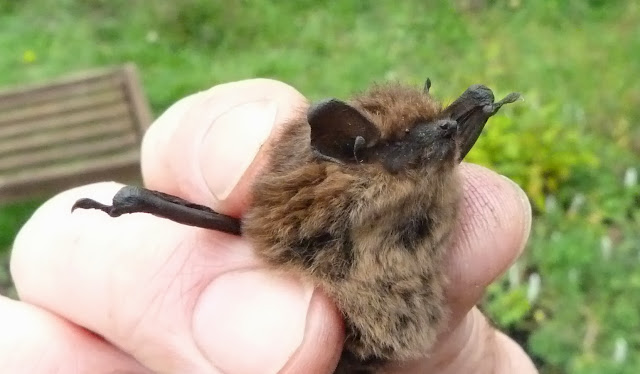 Last but not least - a Common Pip (deceased) finally photo'd after (apparently) hitting the van windscreen just as I drove up to the plot the other week. And only last night I spent an hour watching a pair of Long-eared Bats hoovering up moths on the barn's windbreak netting - managed to (very badly) photo one ghosting up to a Large Yellow Underwing .... but on the wrong side of the netting!