October’s been a surprisingly productive month on the 1KSQ front here at Herstmonceux with a steady trickle of half-decent moths and an almost endless supply of weird and wonderful fungi to try and ID. My 300th moth species since I started counting in early April 2013 finally turned up in the trap yesterday (Saturday 26th Oct) - a Dotted Chestnut - following hot on the heels of (well, 24hrs later than) species no.1080 ... Convolvulus Hawk-moth! One or two other surprises during the month too: 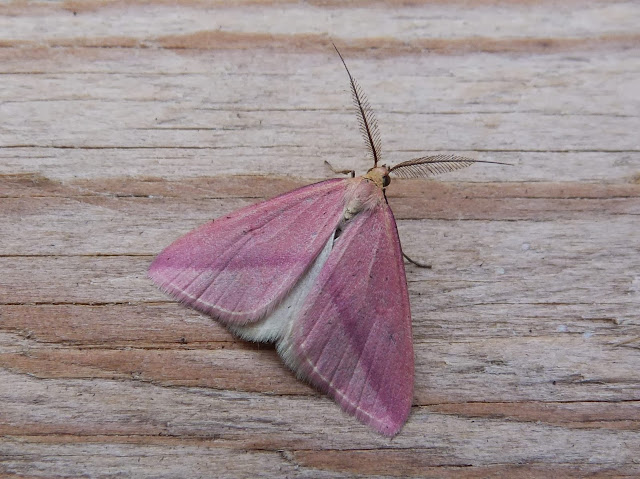 In between all this excitement, there’s been quite a few other things I’ve added to my 1KSQ list although any new birds are still noticeable by their absence, despite the recent plague proportions of migrating Ring Ouzels nearby (well, 250-400 along the coast here at least). A similar number of Redwings flew over the plot here on the 11th … but they were already on my list back in the spring. Very frustratingly, I heard a young Peregrine calling from the top of the old redundant observatory in the Castle grounds the other day (50m outside the square), while the next day I sat on the stile near the Church (firmly inside TQ6410) only to hear a Cetti’s calling from the nearest ditch down on the Levels - also 50m the wrong side of the square. The bird tally (still) remains on 87 but I haven’t given up on the TQ6410 Barn Owl or Stonechat just yet. Anyway, without much further ado ….

1st Oct - around the workshop:
1025 - Garden Rose Tortrix Acleris variegana at the workshop kitchen window attracted to the light

2nd Oct - plot and moth-trap (upper meadow - mild, v.muggy, v.damp and 15-16C at night) :
1026 - Nursery Web Spider Pisaura mirabilis on nettles near the workshop - bit late for these?
1027 - Four-spotted Footman Lithosia quadra at least twelve (all males) in and around the moth-trap 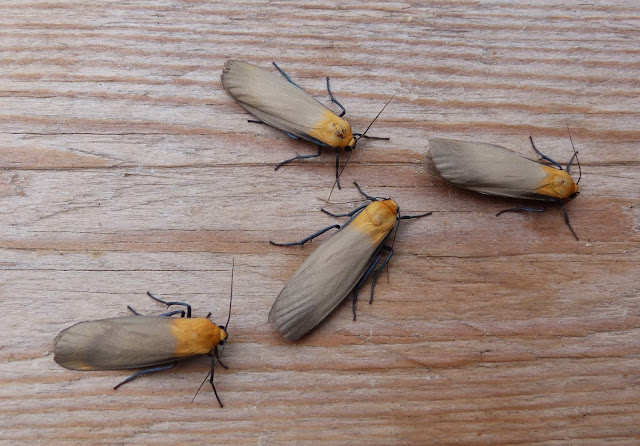 3rd Oct - around the plot:
1031 - Giant Puffball Calvatia gigantea at the end of the wild flower bank next to the workshop
1032 - Discus Snail Discus rotundatus in one of the meadow pots on the plant bench

7th - 9th Oct - moth-trap and around the square:
1035 - Satellite Eupsilia transversa
1036 - Red-line Quaker Agrochola lota
1037 - Harvestman Opilio canestrini on the workshop wall illuminated by the moth-trap
1038 - Honesty Lunaria annua seedlings starting to sprout up by the Giant Puffball although it last flowered in 2011
1039 - Charcoal Burner Russula cyanoxantha common around the woods on the edge of the Castle grounds
1040 - Brown Roll-rim Paxillus involutus seen and photo’d last week but taken me a while to ID it
1041 - Fairies’ Bonnets Coprinus disseminates in the Castle’s beech wood bordering the little bluebell (birch) wood
1042 - Psathyrella hydrophila (fungi)
1043 - Tibellus oblongus (spider)
1044 - Tipula confusa (cranefly) in the moth trap
1045 - Black Slip Wasp Pimpla rufipes (below) 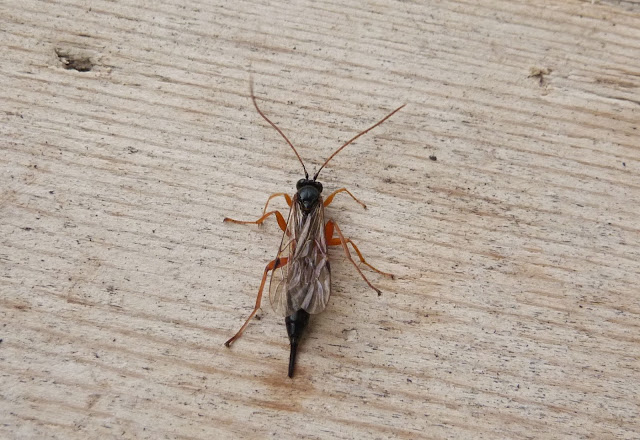 14th Oct - around the plot and square:
1047 - Oriental Plane Platanus orientalis walked past this old tree hundreds of times but never noticed the leaves …
1048 - Meadow Waxcap Hygrocybe pratensis around the neighbouring grazing field edges
1049 - Cep or Penny Bun Boletus edulis a small one along the bridleway through the plot
1050 - Fly Agaric Amanita muscaria (below) several along the edge of the bridleway and also in the bluebell wood ‘top plot’ 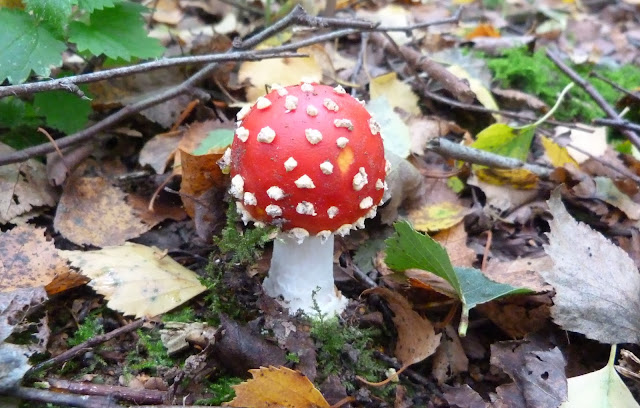 16th Oct - around the plot and square:
1051 - Wild Hop Humulus lupulous in one of the few stretches of old hedgerow (just down the road) I hadn’t checked
1052 - Thick-headed Fly Sicus ferrugineus mating pair photo’d (below) on broad-leaved dock on 10th July in the lower meadow and only recently ID'd ... but must admit I’m not 100% on these ... 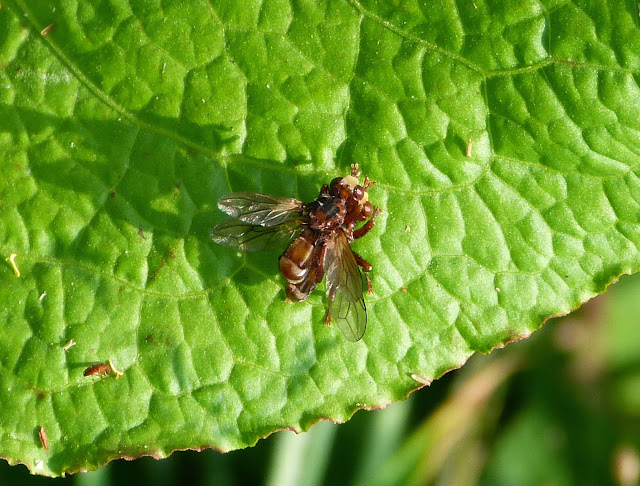 17th Oct - Fungi foray around the plot and neighbouring beech wood:
1054 - Cauliflower Fungus Sparassis crispa (below) on the edge of the rookery wood next to the plot 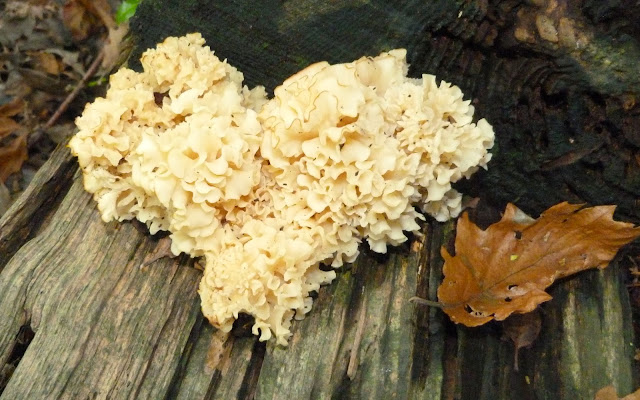 20th Oct - Around the square … lots of fungi but ID’s are still proving tricky:
1060 - Orange Birch Bolete Leccinum aurantiacum
1061 - Coprinus plicatilis under various hedgerows and one or two field edges
1062 - Bay Boletus Boletus badius in the little bluebell wood at the top end of the plot (fried it for lunch)
1063 - Veiled Oyster Mushroom Pleurotus dryinus growing off a beech stump near the bridleway south of the Castle
1064 - Wild Fennel Foeniculum vulgare a small bit of rabbit-grazed greenery in the parking area, unnoticed all summer 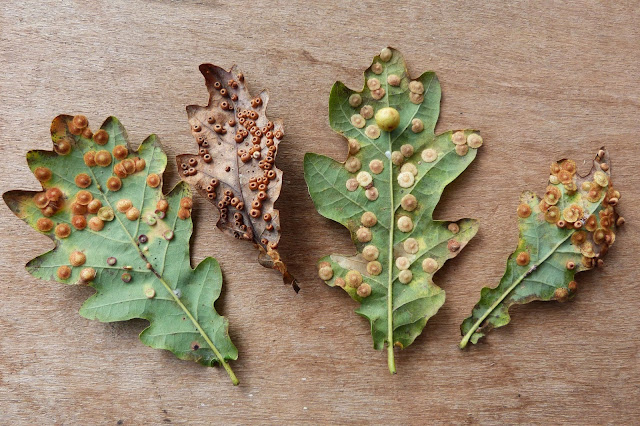 21st Oct – a quick, early morning (fungi) walk around the square plus the moth-trap:
1068 - Tar Spot Fungus Rhytisma acerinum very common on sycamore leaves all around the plot
1069 - Amethyst Deceiver Laccaria amethystine (below) lots in the beech woodland just south of the bridleway by the Castle.  This morning's breakfast snack  - OK but nothing special ... 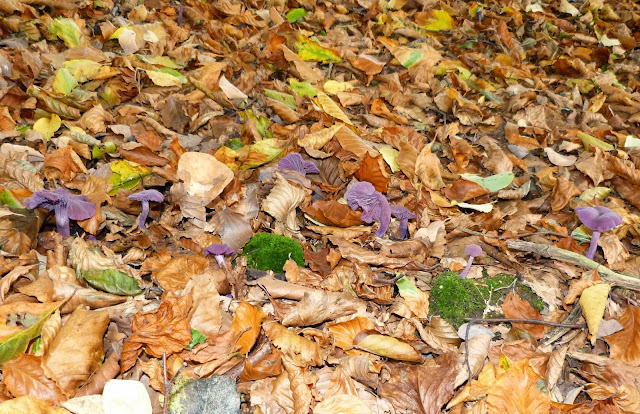 22nd Oct - around the plot:
1075 - Rusty-dot Pearl Udea ferrugalis (below) disturbed from lower meadow (near pond) late afternoon and caught in a pill-box 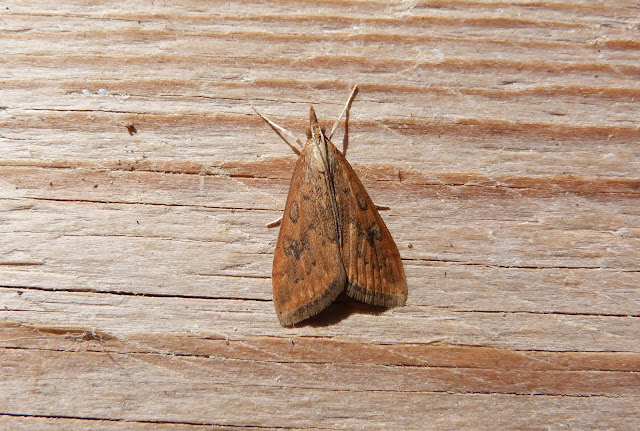 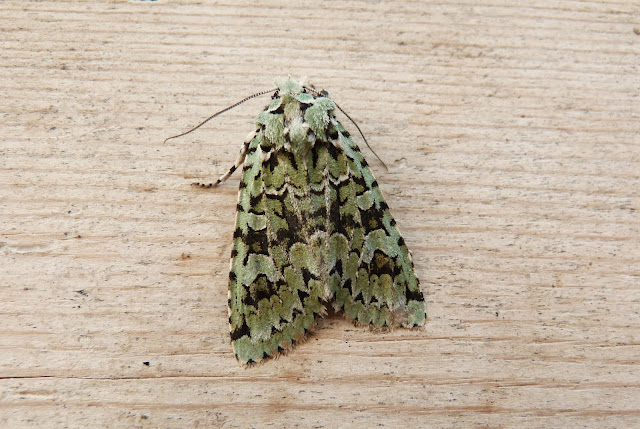 1078 - Cypress Carpet Thera cupressata ... and another one, two nights later …

25th Oct - moth-trap behind the barn/workshop (very mild, southerly wind, 14C switched off at 02.30am - rain):
1079 - Mottled Umber Erannis defoliaria
1080 - Convolvulus Hawk-moth Agrius convolvuli (below) first time I’ve seen this hawk-moth in the wild in the UK - last one was hovering over buddleia beside the river Lot in France, September 1995 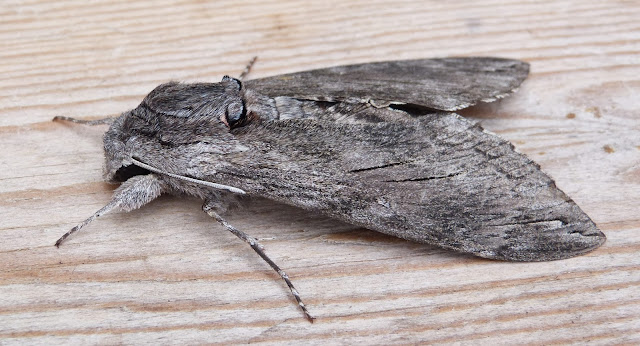 1081 - Culiseta annulata (mosquito) in the moth-trap 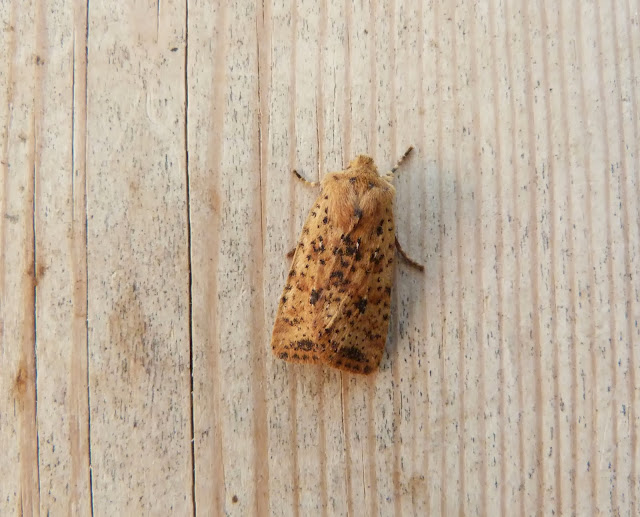 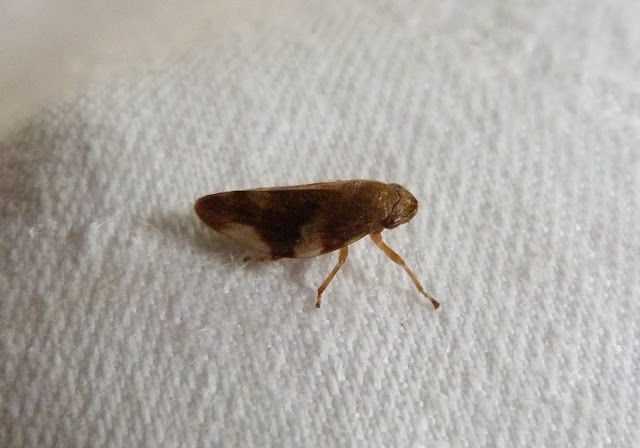 1085 - Common Funnel Cap Clitocybe infundibuliformis in the little glade by the wildlife pond
1086 - Grey Coral Fungus Clavulina cinerea along the bridleway between the Church and Castle
1087 - Suillus bovinus (fungi) ditto
1088 - Panaeolus rickenii (fungi) on the edge of the grazing meadow
1089 - Shaggy Inkcap Coprinus comatus (not yet opened up) next to the fallen beech tree trunk, far corner of grazing meadow next door
1090 - Sabre Wasp/Giant Ichneumon Rhyssa persuasoria (below) a formidable beast hunting on the same fallen beech trunk next to 1089 above 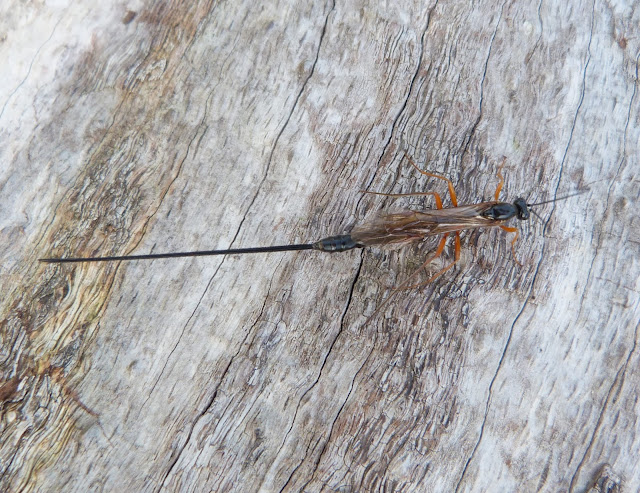