An interesting evening kicked off yesterday when my missus asked me to take some rubbish out to the bin. As I went a Whimbrel flew SW over the garden, calling and obviously keen that I didn't miss out on it.


I headed out for a walk around the bay, knowing that since I'd been away for over a week three was bound to be something new. First up was Enchanter's Nightshade in the woods behind the house, before arriving at the sailing club at high tide to find massive shoals of small fish all around the bay. Tens of thousands of them with the occasional breach of the surface and some silver sides evident as individuals twisted and turned. I decided to go home for a net! First though I ran up Erysiphe on Heracleum and a nice flowering patch of Field Bindweed between parked yachts and the bay. Here's a video of a small shoal breaking the water surface.


After a brief loop I headed home and grabbed a net and bucket from the garage. That was the easy part!

Four specimens were secured. Back at the lab the dorsal fin originated clearly before the ventrals and the eye was pretty big, which seem to separate it reliably from the only other option I could see, which was Sprat. Though I've seen and eaten a fair few, this was the first herring I remember seeing alive. 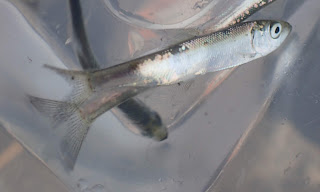 When I was growing up my dad used to wear a hand-knitted arran sweater and had a huge beard. With my uncle and aunt they used to sing folk songs with a guitar in the back garden, and I still remember some of them. We also used to listen to stuff like this in the car on journeys, though I remember a faster version that I liked better than this (by the Spinners, maybe).