Spring in now well advanced with many more plants in flower and most of the large trees leafing up.
The changeable weather which is to be expected at this time of the year has meant insects have been a bit scarce at times. But during the better spells some new ones were added such as the Tawny Mining Bee (Andrena fulva) in the photo below. 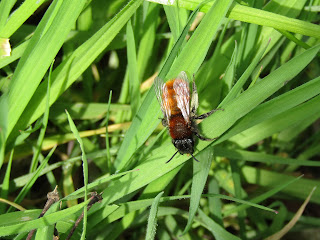 The numbers for the two squares are as follows