Cullaloe LNR - 666, the number of some beasts

So after a week away watching the Fieldfares buzz about the treetops and breeding Barnacle Geese wandering around the place in Norwegian sunshine it's back to the grindstone at Cullaloe. There's plenty to catch and ID and it looks like I'll break last year's April 676 tally, though not by as much as hoped. I had expected to be a bit further on than this and it seems the fastest 1000 is safe. Even making 700 this month would be a stretch. Still happy with the amount of new stuff coming through though and my target of 200 new species for the reserve is almost done already.

There was a red letter day when I found two new flowering plants in an under-surveyed corner of the reserve at the weekend. It's an interesting bit which is hard to get to and was apparently omitted in the NVC survey since it's clearly not what the map claims it is! Anyway, Gooseberry and Greater Stitchwort were nice finds there among about ten new species.

Also a new stenus for me and the reserve - S.flavipes. I'm loving the Stenus more since I learned to gen det them and I think this is species 5 this year 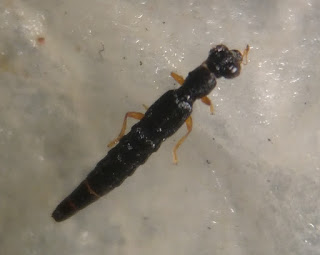