My undoubted highlight of the week was finding a Heather Ladybird at Thorne. As well as being a 'lifer' this was at first a major surprise. The surprise being in that no heathland exists within at least 15 or 20 miles of Thorne. However as I read up about Heather Ladybird's it became apparent that recently they have started using Leylandii trees as a habitat. It was within a group of Leylandii that I found the ladybird.
So this weeks photo is of a Heather Ladybird. (I know I could do with a better macro facility on the camera!) 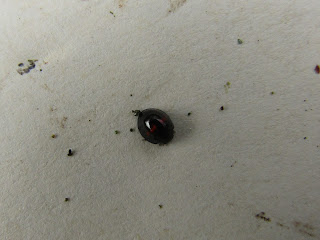 The numbers for the 2 sites are given below