I don’t mind admitting I’ve almost ground to a crawl on the 1KSQ front during July which should have been one of the most productive months of the year. But some pretty serious, heavy-duty family stuff has been on-going behind the scenes recently and while all this hasn’t prevented me from occasionally walking around the square or even running the odd moth-trap here on the plot (but see also below), my main focus has necessarily been well away from TQ6410 of late. The recent hot weather and moth-trapping efforts also delivered a bit of a double whammy here and partly explain why I’m not exactly racing towards that elusive four-figure total as quite a few others have already impressively achieved.

On the one hand, more moths than I can possibly deal with, seem to end up in, around, on top of, or even underneath the old trap (as well as in the workshop when they’ve flown out of the trap), never mind all those hanging up or hiding away in the vegetation in the plot’s upper meadow/trapping area. Not only that, but I still haven’t quite got the hang of this moth-trapping malarkey, even after weeks and months of pink and orange blobs looming in front of me, eyes opened or closed. On more than one occasion last month, I found myself still crawling around on hands and knees with a torch in the dewy grass near the trap in the upper meadow, pill-boxes over-flowing, just as the first light of dawn straddled the north-eastern horizon and the rooks got going in the wood next door. In short, I kept forgetting to go to bed while the lamp was on and kept getting hopelessly, though enthusiastically engrossed (and knackered) by all the night-time lepidoptera on this plot.

Brown Long-eared Bats' left-overs inside the barn  .... I'm not the only one catching moths here! 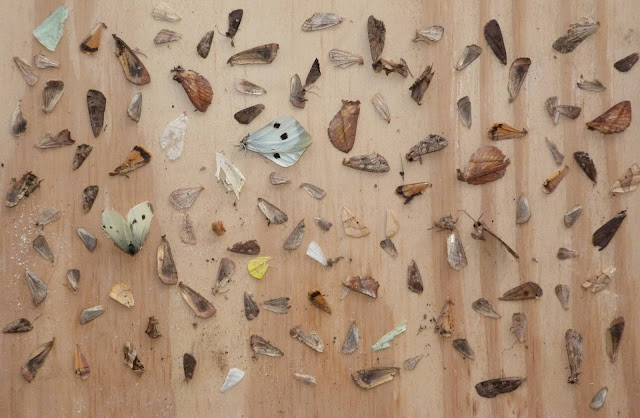 One of the downsides to the July heatwave and my on-going (day-time) surveys, wildlife treks, gardening work and vital family stuff elsewhere, is that I didn’t always leave enough time the next morning to give those poor old moths my undivided attention (for ID purposes). And so on more than one occasion, I released them all before I’d logged any mega rarities or added significantly to my 1KSQ total. Worse still, I was often way too dozy to have any hope in hell of writing up yet another blog so to get this far with my next 1KSQ contribution, I resolutely ignored the moth-trap on some of the warmest nights of the year and opted for some sleep instead!

But none of this properly explains the lack of smaller invertebrates in my total - I really ought to do a bit of beating and sweeping around the plot. But then I’d be back to square one and the mothy excuses I’ve just offered would apply equally to trying to identify a fridge full of obscure insects! 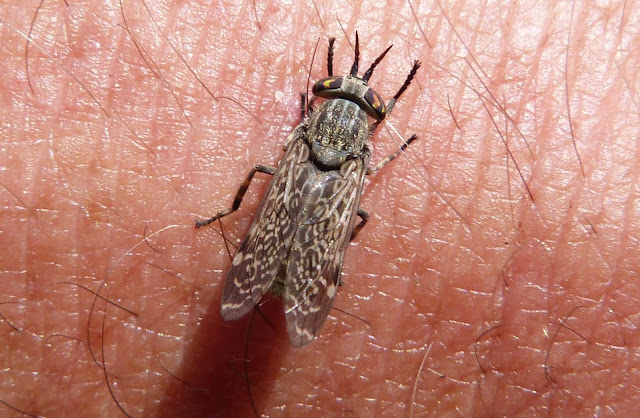 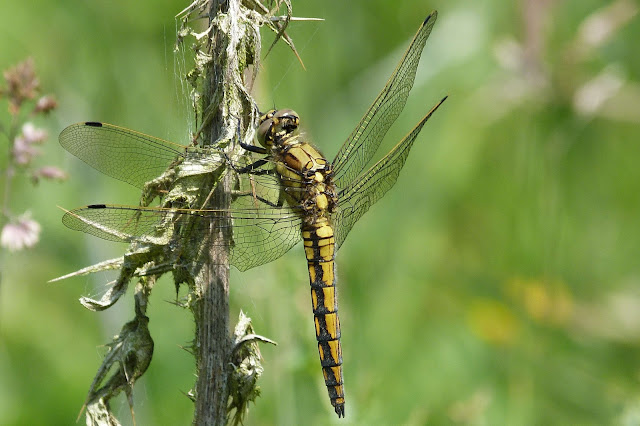 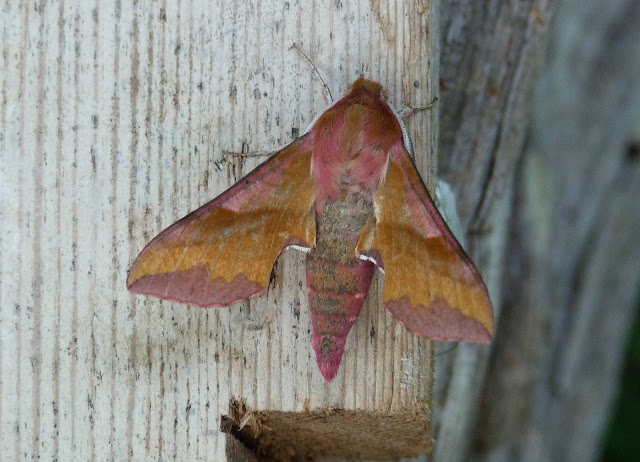 759 - Small Elephant Hawk Deilephila porcellus (above) .... one of four in the trap along with fourteen Large Elephant Hawks ... 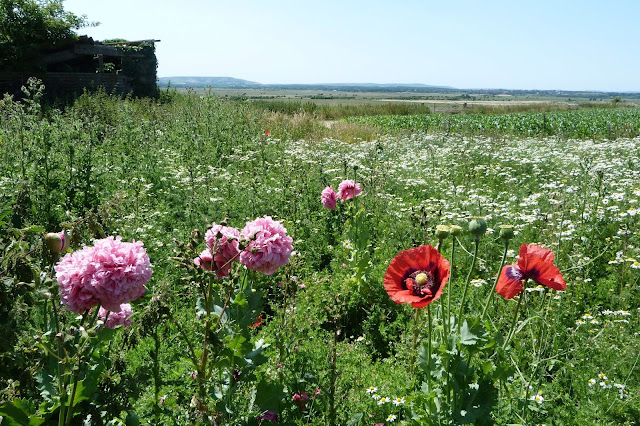 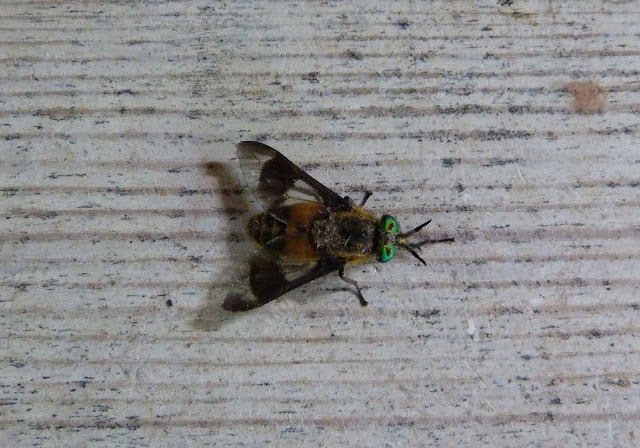 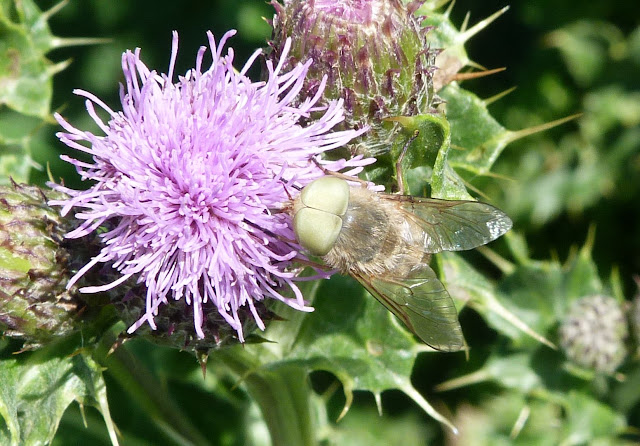 15th July - around the plot and square: 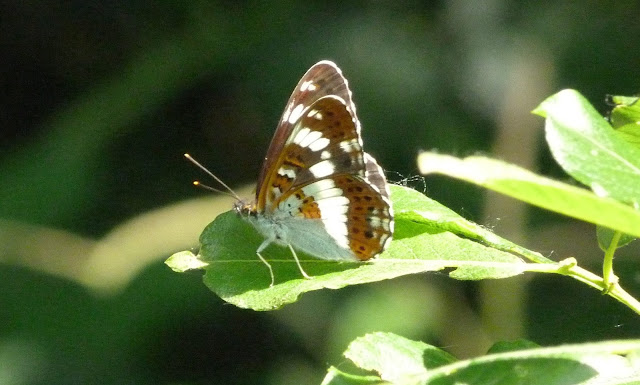 800 - White Admiral Limenitis camilla (above) Along the wet woodland edge by the Castle's bridleway pond. Not the greatest photo ever but a very welcome first for the square. Had no idea they even existed nearby ..... 17th Jul - around the plot:
810 - Leaf-cutter Bee Megachile willughbiella (above) in and out of a small plant-pot on the outdoor benching while I was watering the plants. The bee was less than impressed ….. but all safely back on the plant-bench now.

21st July - around the plot:
819 - Purple Hairstreak Neozephyrus quercus ... spiralled out of the rookery wood oaks and down to the smaller oak-trees re-generating widely around the upper plot the other evening (my third sighting here).

22nd July:
820 - Agapeta hamana (micro-moth) flew in with the mozzies through the open window the other evening.
821 - Agapeta zoegana (micro-moth) ditto …. and again on 2ndAug
822 - Oak Eggar Lasiocampa quercus …. a female found on the wind-break netting and somehow missed by the bats.

28th July - around the plot:
833 - Silver-washed Fritillary Argynnis paphia  ... spotted by elder daughter nectaring on bramble (the SWF, not my daughter) - a first ever for the plot (and square?) - while we were doing a trial run for the Big Butterfly Count.
834 - Yellow-tailed moth Euproctis similis
835 - Herald Scoliopteryx libatrix 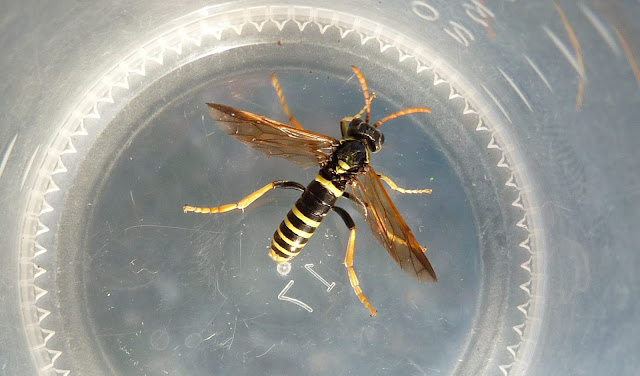 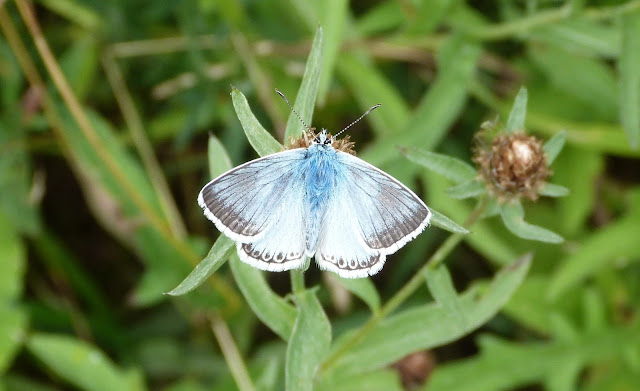 838 - Chalkhill Blue Polyommatus coridon (above) ... only the second sighting at the plot. Probably blown across the Pevensey Levels from the South Downs above Eastbourne or Polegate 7-8 miles away as the crow flies (weather conditions were exactly the same as per the previous sighting in 1996). 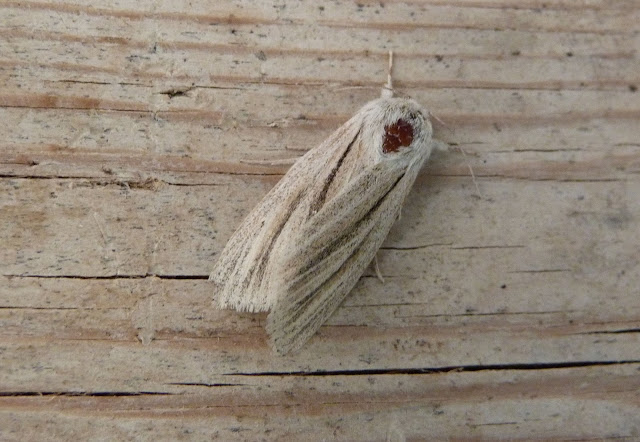 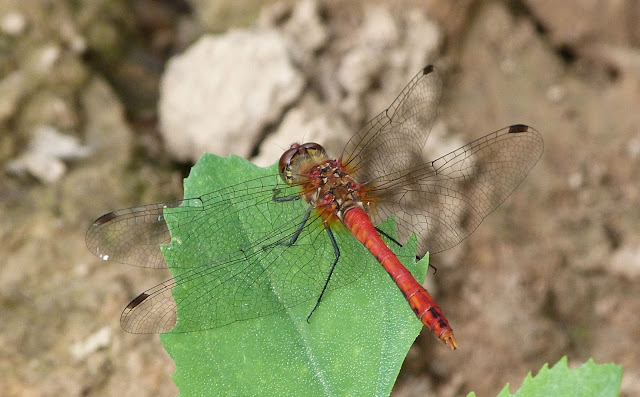