Just about caught up

I was hoping to break the 600 barrier for the square by the end of May but missed out by just a few. It's been very busy since I got back (as May and June usually is) and with botanising outside the square quite a bit, I've have had little time to do updates but I think I've just about caught up.


It's nice that the invertebrates are beginning to show and I need to put an effort in this month to get some more and hopefully some new ones. The same goes to get the 130 or so more plants that I still need and know they should be around if I look hard enough.


The moth trap is beginning to come into its own now and looking at the overnight catch (which I haven't checked yet and just covered it over as it's stotting down) I reckon I should have hit the 600 mark. I can see two new ones for the year just looking through the funnel.

So here's where I am /was at the end of May 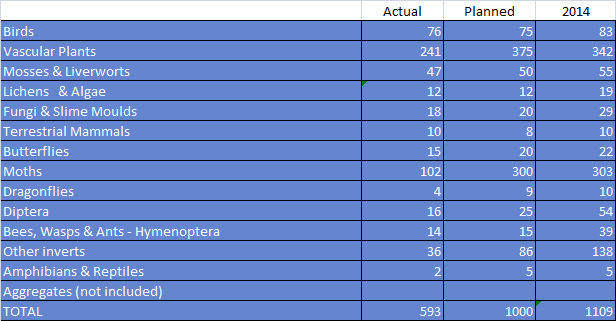 So let flaming June begin ....  once it's stopped raining. I'm off now going to make a cuppa and check a few pots of creepy-crawlies thats in the fridge.


Keith Robson
Waldridge VC66
Posted by Chester Birder at 8:39 AM