In 2009 I was lucky enough to find the longhorn beetle Paracorymbia fulva in the parish. This was thought at the time to be a south coast species, and Leicestershire was way off its beat - so much so that my County Recorder at the time took a second opinion on it. Since then it has also turned up in Nottinghamshire so its range is obviously increasing.  Since 2009 I have recorded it in more or less the same area every year so I was keen to pick it up in 2013 and add it to my list for the challenge. On 5th July I managed to do just that. 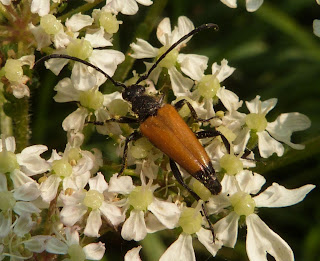 The mild night also gave me a good catch at the moth trap and a few new species for my list.  My total for SP 4993 at the moment is 916 so the end is in sight (but not quite quickly enough to catch Andy!)
Posted by grahamc at 3:34 PM