Back in June 1993, I became the proud owner of a 5.5 acre plot of agricultural land with a barn (a.k.a. the Wild Flower Barn) near Herstmonceux, East Sussex. I’d just blown a major chunk of my voluntary redundancy, ever hopeful that I’d somehow set myself up in wildlife conservation (self-employed) whilst also doing my house-husband thing. In short, juggling two young kids, native plants, captive-bred butterflies, a barn full of junk and trying to stay solvent. Despite a lot of ups and downs along the way (and quite a few more recently), I’ve still got the plot, I still own three (rather than two) grown-up kids, am still dabbling in native plants, butterflies and wildlife conservation, I now have a workshop AND a barn still full of junk ... and I’m still trying to stay solvent.

Anyway, twenty years ago, to celebrate becoming a plot-owner, I went away with an old mate of mine for a long week-end’s cycling-cum-wildlife-watching just across the Channel. Unfortunately (and to cut a long story short) we got wrecked on the overnight ferry en route i.e. ‘wrecked’ .... not ‘ship-wrecked’. So perhaps not surprisingly, I fell off the bike at 4.30am along the quayside at Dieppe, just a minute or two after leaving the ferry. The left pedal then broke off while trying to cycle up that big hill out of town …. and it was still only 5am. (warning: cycle over railway lines in the quayside tarmac at right-angles rather than at an acute angle …. and maybe best not mix beer, cider AND wine on the overnight ferry). Not only that but it was pouring with rain and it rained ALL that weekend in mid-June 1993 and only stopped when we arrived back at the Dieppe quayside 48 hours and 80+ soaking wet kilometres of one-footed pedalling later. And I still don’t remember seeing ANY wildlife at all, apart from a few gulls from the Dieppe-Newhaven ferry on the way home.

And so a fortnight ago and twenty years on, I returned to northern France for a five day, equally low-budget wildlife trek with another mate of mine (plus tents and bikes), taking the van this time and carefully avoiding the Dieppe quayside (and beer & wine .... but not cider). In fact we didn’t go anywhere near Dieppe but headed back instead to an excellent wildlife spot - Baie de Somme in Picardie. It only rained once (the other Monday morning) but that didn’t stop us going out on the bikes every day and notching up a reasonable bird list for the trip (115 species), a few dragonflies (16), a handful of butterflies (14) and about 150km of effortless, disaster-free pedalling (it’s very FLAT around the Baie). The campsite was brilliant too (Rose Chafer flew on to the reception desk, House Martins nesting in loo-block gable-end, Water Voles and Scarce Chasers along the stream, Spoonbills, White Storks and Great White Egrets flying over). A pair of Honey Buzzards on the way home was yet another highlight  ....

None of which explains why my 1KSQ total is still crawling along … but nevertheless edging ever closer to 750 species at the halfway stage: 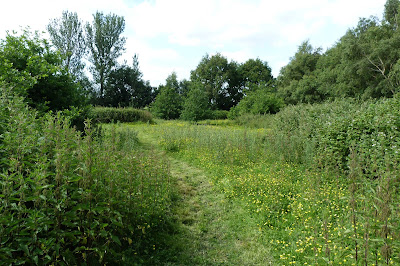 Upper meadow at the plot in June  2013. It was just an open grazing field in 1993 .... but natural re-generation has taken over and paths now have to be strimmed through the extensive nettle and bramble patches. Great for birds, moths and invertebrates - this is one of the moth-trap hot-spots ....

Bit of catching up to do since my last posting:
9th June:
617 - Goat’s Beard Tragopogon pratensis …. along the Castle bridleway and here at the plot
618 - Small-leaved Lime Tilia cordata…. opposite old George’s cottage 100m down the lane (he also told me about a Little Egret sitting in his back garden oak tree at 6am the other morning …. but no luck so far with that one)
619 - Broad-bodied Chaser Libellula depressa …. in the upper meadow 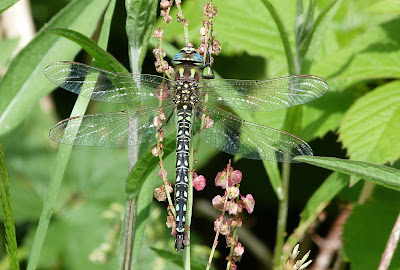 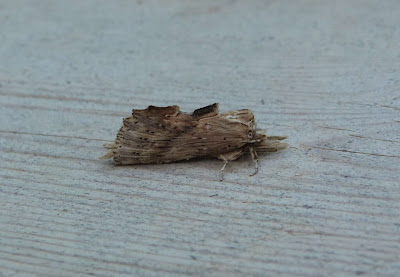 Plot 13/6:
634 - Wood Mouse Apodemus sylvaticus I’m sure it nipped out of the compost bin then jumped it’s way across the grassy area behind the workshop

19th Jun: Back at the plot:
635 - Clouded Yellow Colias croceus flew across the parking area here at a rate of knots while a bit earlier, another flew across the garden up the road where I was working. Quite a few migrants reported locally last week ….. and another Clouded Yellow here at 8.30am yesterday 30/6 …. 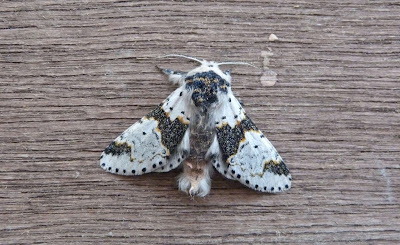 Around the square 20th Jun:
649 - Heath Bedstraw Galium saxatile in the upper meadow on the plot
650 - Lesser Stitchwort Stellaria graminea all around the plot
651 - Celery-leaved Crowfoot Ranunculus sceleratus in the little watery ditch near the plot
652 - Pineapple Weed Matricaria discoidea on the edge of arable land by the farm
653 - Scarlet Pimpernel Anagallis arvensis (ditto)
654 - Common Red Soldier Beetle Rhagonycha fulva by the little ditch
655 - Small Magpie (moth) Eurrhypara hortulata flew out from brambles on the plot
656 - Fox Moth Macrothylacia rubi flew across the grazing meadow alongside the plot
657 - Broad-leaved Willowherb Epilobium montanum all around the plot
658 - Corn Buttercup Ranunculus arvensis on the edge of arable land by the farm
659 - Field Rose Rosa arvensis in a hedgerow just south of the Castle
660 - Purple Toadflax Linaria purpurea self-seeded around the parking area at the plot
661 - Clary Salvia verbenaca ... ditto - in the parking area
662 - Water Figwort Scrophularia auriculata in the ditch by the wet woodland
663 - Meadow Fescue Festuca pratensis
664 - Small Heath Coenonympha pamphilus 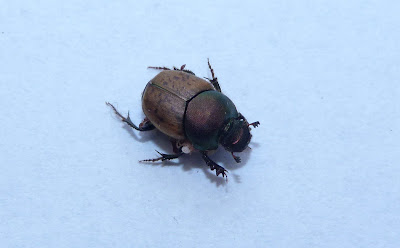 674 - Dung Beetle Onthophagus similis (left)  .... took me a while to ID it, despite it being pretty distinctive
675 - Figwort Weevil Cionus scrophulariae (legless larvae on figwort leaves and flowers)
676 - Red-tailed Bumble Bee Bombus lapidaries (better late than never)
677 - Gorse Shield Bug Piezodorus lituratus (ditto – and still haven’t done any serious beating or sweeping around the plot yet …. probably because I’ll have never have time to ID the catch) 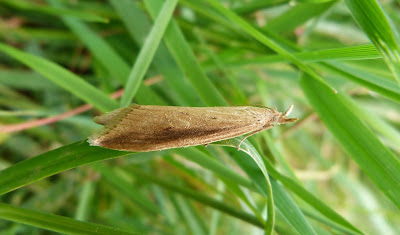 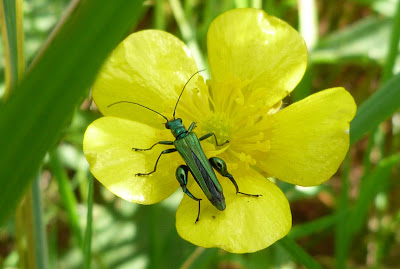 687 - Thick-legged Flower Beetle Ischnomera cyanea photo‘d on Red Campion on 6th June but had overlooked it until yesterday when another one turned up on Ox-Eye Daisy (and Buttercup)
688 - Leaf Beetle Gastrophysa polygoni finally ID’d from April!
689 - Vine Weevil Otiorhynchus sulcatus found quite a few larvae this year while re-potting some of the plants but sort of pleased to also see a fully-fledged weevil …. for once!
690 - Hoverfly Volucella bombylans (bumblebee mimic on the nettles and brambles this past week)


Herstmonceux Castle grounds 25/6 .... another brief mini-blitz around the grounds and lakes: 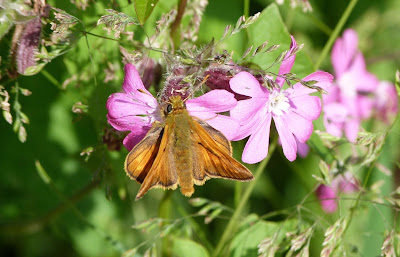 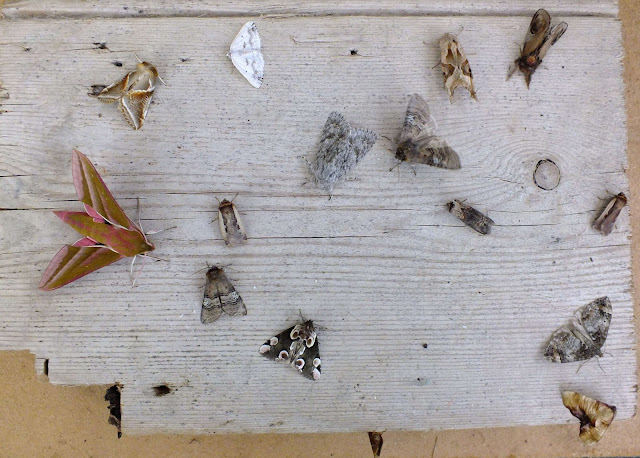 Plot 27/6 and 28/6:
723 - Grass Vetchling Lathyrus nissolia
724 - Brown Long-eared Bat Plecotus auritus back at last flying inside the barn and picking off moths from the wind-break netting. It barely even registered on the moth detector (vaguely circa 40-45mhz) and sometimes not at all, even when it was only 2 metres away. For better or worse, a real moth-muncher par excellence ….
725 - Pyramidal Orchid Anacamptis pyramidalis several small flowerheads just emerging in the wild flower bank 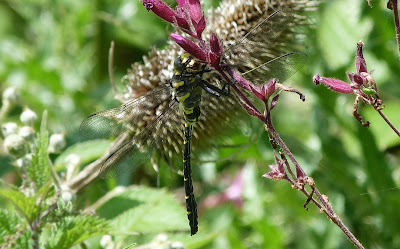 Plot 29/6:
737 - Golden-ringed Dragonfly Cordulegaster boltonii on Red Campion in the front meadow
738 - Four-spotted Chaser Libellula quadrimaculata over bracken in the upper meadow
Hairy Dragonfly Brachytron pratense ….. almost made it a hat-trick of new dragonflies for the Challenge (and the plot’s year list) .... but I’d already ticked this one a couple of weeks back  ...  see earlier! 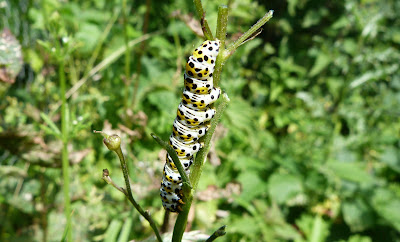 Plot 30/6:
739 - Mullein Moth Cucullia verbasci (larva on Figwort)
740 - Sand Martin Riparia riparia small mixed hirundine flock overhead. I hate hearing the phrase ‘autumn migration’ from ornithologists when it’s still only JUNE …. even if the birds are on the move! 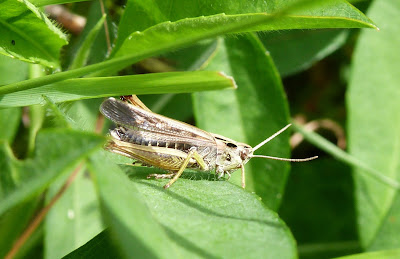 And so on exhaustingly to 741 species at the halfway stage ....