Dalgety Bay, Fife - Back in the Saddle

After a couple of days of rain I thought it would be worth looking for some mushrooms and I wasn't disappointed - though the small collection will take some time to work through. One that won't take much is the big polypore Dryad's Saddle, which was in fine fettle. 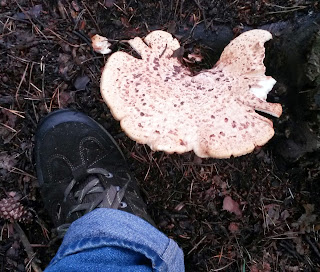 Other than my mycological homework bits of this and that were picked up, including things that really ought to have been recorded earlier. A half hour river watching produced little of interest, unless you count the cordon of female RB Mergansers that I tried to string into Goosanders until they came too close for plausible deniability. Bit early for the Goosanders, though they will come almost certainly.