Not a phrase I use too often these days though I have started to pick up the binoculars in earnest for vismigging. I did do a bit of vismig in the adjacent square a few years back before moving to a much better location not far away. In those days I didn't live in the square so I had to travel to both (Inverkeithing blog, somewhat disused these days). That site still has the vismig.org UK record for day Mistle Thrush passage (124 SW in 35 mins!) and the legendary 4k Redwing lunchtime was also had there (link). Not to mention other amazing things I saw from a small square of coastal concrete - Storm and Leach's Petrel, Otter, Pilot Whale ... ah, enough old man reminiscing...

Anyway, I started off this morning looking at mostly empty skies until some inland hirundines forced me to slightly relocate for a better view. As I reached the top of the small rise 6 Black-tailed Godwits flew over my head, but at enough angle that they exposed their lovely upperparts to make life easy. I love those birds, especially wheeling in a big flock. After a brief, very successful, botanical interlude I found myself at another location I wanted to give a try. A lone Goosander barked from the bay in front of me - probably wondering where all her friends had gone. Then a flock of 10 Shoveler made a terrific close flypast - second unexpected bird score of the day. Looking forward to the season starting properly, but those will certainly do for starters!

(note - I know Shoveler is spelled with one "l" but iRecord, where it was cut and pasted from, appparently doesn't!)

In between those I ventured up the coastal ath a bit where somebody has started clearing their garden which was badly overgrown. The garden slopes down to the shore and this chopping back had exposed a small burn (that's a stream for you Southerners!). He's doing some nice landscaping there, but what it also exposed was a shore edge collection of goodies including Tansy, Greater Willowherb and Hedge Bindweed. When the tide's out and time allows I'll have a better rummage around in there. I still have a bag of green to be sorted out this evening. No not that sort. Behave ... 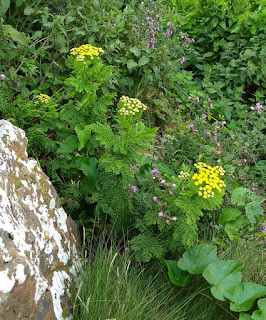 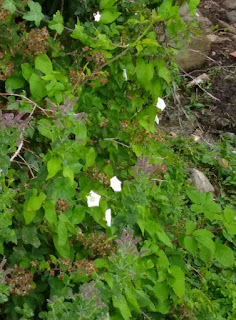