Finally the 3/4 is breached with a final spurt after a bit of a crawl.

But first some nice flies. The second of the county's three Rhinophoridae species, and the only other one I've seen, was swept from grass yesterday lunchtime - Paykullia maculata. This was accompanied by the lovely tachinid Eriothrix rufomaculata, a new and long-anticipated addition to my tachinid list.


A late evening rain cleared in time for me to head out at dusk (and then it rained a bit more but not too bad). 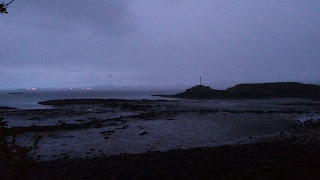 A few moth additions were made, along with a whole bunch of non-new species. I also stumbled into the discovery that I had probably misidentifed Smoky Wainscot previously - an error which I'll correct inline 1984 style. That will leave the impression that I never screwed it up in the first place, unless someone discovers this confession ...

Also netted on a flypast was a Brown Chafer, whose distribution displays the usual characters for a scarcely recorded species - an east coast distribution on NBN and in Brock and a Nature of fife inventory which says the species is abundant coastally. Seems to be as I also had one in my garden last week.