Rummaging around in the woods yesterday I managed to pick up a bit of this and that and was on my way back to the car when I had a thought that some woodlice I saw may not have been O.asellus. It's not a group I have a lot of familiarity with outside a handful of species so I turned back to take a second look.

Turned out this was fortunate as I noticed a small spiky ball on the edge of the stone I turned to pick some specimens from. A quick handlens examination came up trumps with a Spiny Snail (Acanthinula aculeata) and alongside it another small snail. Double the size of the first but still pretty tiny - Lauria cylindracea. Still on the same small stone the size wars continued as there was also Punctum pygmaeum. A lovely trio of tiny snails, like some kind of Mollusc nouvelle cuisine. All went into the smallest pot with oodles of space to spare. 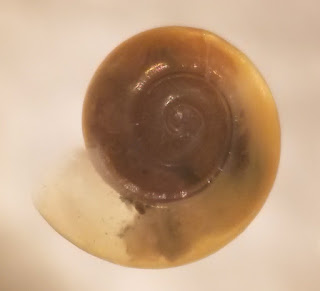 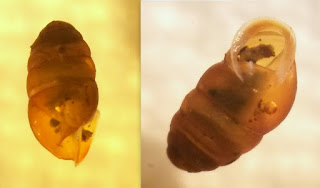 And the numbers bit: