Skye - an AMAZING time at the beach

Hit the beach today. That was it. No work, no hills, no woods, no nuffin' - just the beach. I was there for hours n' hours and oh boy did I ever have a fun time!

I concentrated on seaweeds (naughty word) marine alga and surprised myself by finding SEVEN new ones for my list. I walked away from a couple of red alga that looked too nondescript to even bother with (and I ignored the encrusting pink Lithophyllums!), but basically grilled all of the rest including a few green ones that required the microscope to clinch an ID. Ok, so I'll just whack up pics with captions -

This was my find of the day - a truly tiny epiphytic colourless red alga that lives epiphytically on an epiphytic red alga, amazing! Took a lot of hard squinting to finally find some, then found several clumps on this one alga. Really pleased with this, a targeted search successfully completed. Talking of targeted epiphyte searches, this was another one -

Blimey, I never knew we had so many epiphytic marine algae, it's like a whole world full of bromeliads out there!!!

They were the lifers, add to that a host of other species that I've already seen and I was having a whale of a time. Didn't even fall over despite schlomping through acres of wrack!

So that's seven new alga, but I also managed a new lichen. Massively common in this habitat, I have to thank Ali for the heads-up (I saw it in your blog!) Despite it being very common I managed the worst pics ever....apologies in advance!

I found a few other bits n bobs amongst the weed. As instructed by Steve Trewhella, I brought a tray with me this time and duly found another mollusc blob. Whack it in the tub and hey presto it grows horns and gills!

Also found this fella under a rock. Talk about slippery as an...oh....oh right, now I get it

Managed to inadvertantly bring this chap home with me, hiding away amongst a clod of Cladophera. The shape of the telson (last segment of the body, the 'tail' if you like) is crucially important when identifying this genus of marine isopods.

Other things of interest included some amazing-looking sponges. My sense of smell is pretty poor (although I smell strongly if that means anything?) and I was unable to detect any bleach-like or bread-like smells emanating from this specimen. I suspect Breadcrumb Sponge but without microscopically checking the spicules it's a bit of a guessing game. Hence it's not on my list...yet

And I found this dainty wee thing. No idea which species, a quick (2hr...) blast through various websites provided few clues. My good mate and fellow PSL weirdo Danny Cooper wisely counselled "anemones are a nightmare. Find a marine biologist or ignore them." If you are a marine biologist who knows the species, please do leave a comment!

Back at the top of the beach I found this lichen growing in mortar, possibly Collema cristatum (Ali, care to comment?) 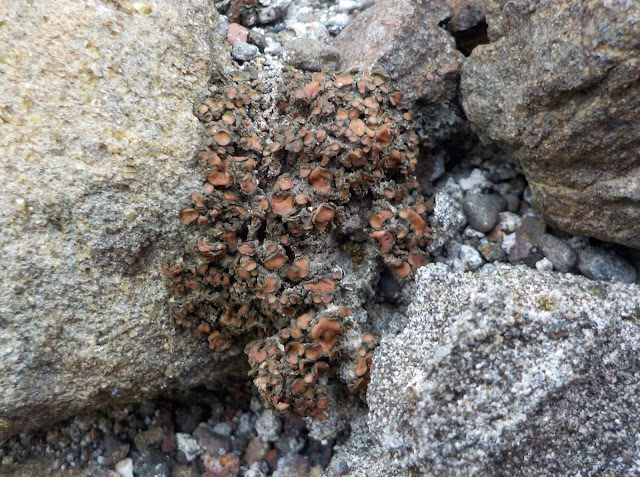 So that's the first third of the 1000 species under the belt. Should go a bit slower for the next month or so before the inverts burst into action - then it'll all go mental for a few months! I'm well ahead of my 2013 tally for the 7th week of the year. In 2013 I reached 300 species on 26th February and 400 on 17th April. Hopefully I'll hit 400 before March is out this year.