Today saw the "Big Five" of woodlice completed (Oniscus asellus, Porcellio scaber, Philoscia muscorum, Trichoniscus pusillus and Armadillidium vulgare) along with the other very common Sea Slater Ligia oceanica. This was helped on my the arrival of the FSC woodlice key and hopefully I may add another species through the year though a browse through the distribution of species suggests I shouldn't hope for too much - woodlice seem to mostly be southern softies!

Most groups have been recorded more or less in line with expectations, though Staphylinidae have done well comparatively. If any groups have been surprising they've been Collembola and Molluscs. Collembola is really only surprising because I didn't set out to pay that much attention to them - it just sort of happened. No doubt I'll add a few more now I'm into the swing with them. Molluscs of course benefitted hugely from working the seashore, though my land mollusc list has grown somewhat too and I'm developing an affinity for slugs. I expect to add a few more through the year and I haven't even recorded Arion ater yet!

Another group I'm expanding my awareness of is the marine algae, and the target for that is growing, aided by arrival of new literature. 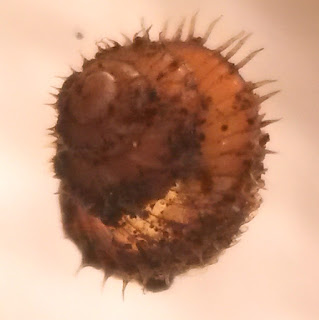 Below the high water mark I loved seeing this Willy Wonka Snail (flat periwinkle), which I don't think I ever got round to posting on here 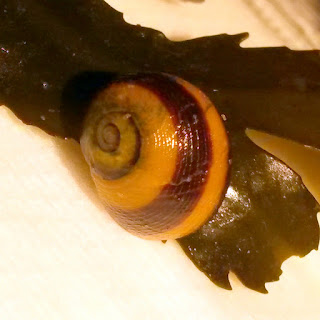 
The only groups I've recorded less than 1/6th of are Diptera and Lepidoptera, but no surprise there really.It won't be long, though, before it all kicks off.
Posted by Ali at 10:41 AM