Not much else to add as not really had a chance to get out due to work and abysmal weather everytime I'm free.

My outing on the February 19 over to Brithdir bank took me past this structure that spans the Rymney River. The metal slope is often full of leaf litter, small twigs etc and is always good for a rummage. Searching through this produced some small Carabids which i provisionally identified all as Ocys harpaloides (also took two from the pillar itself). Getting these home i realised that some looked similar to that new one that had recently been confused with O. harpaloides. 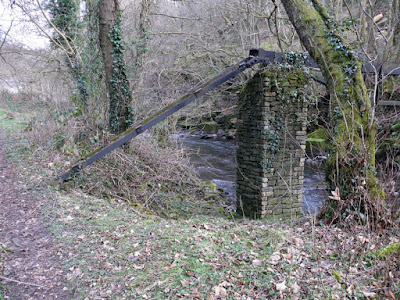 Needing a second opinion, i waited until i was on the Blue Ground Beetle workshop down in Neath, as John Walters and Steve Bolchover were attending. Steve B was the first i bumped into so he had the specimen.

Steve has promptly replied (by email) that its spot on for Ocys tachysoides, so i'm happy with that.