I was asked to work this evening, so took the afternoon off in lieu. Pretty wet and murky outside but with a couple of hours to kill I wandered down to Uig Woods in search of more slugs to photograph. Let's face it, wet weather and slugs kinda go hand in hand, right?
I began by lifting rocks in contact with the woodland floor, not too many slugs actually (guess they're all out gallavanting elsewhere in the wet?) but I did find a strikingly patterned flatworm, one I knew I hadn't seen before. Thanks to endless internet searching for obscure creatures I thought I recognised it as the 'Many-eyed Flatworm', discovered new to science near Cambridge a few years ago. Flippin 'eck, this could be my most significant find on Skye yet! I took lots of pics through my 10x handlens, which just happened to have a few raindrops on it hence the resulting shite pics - 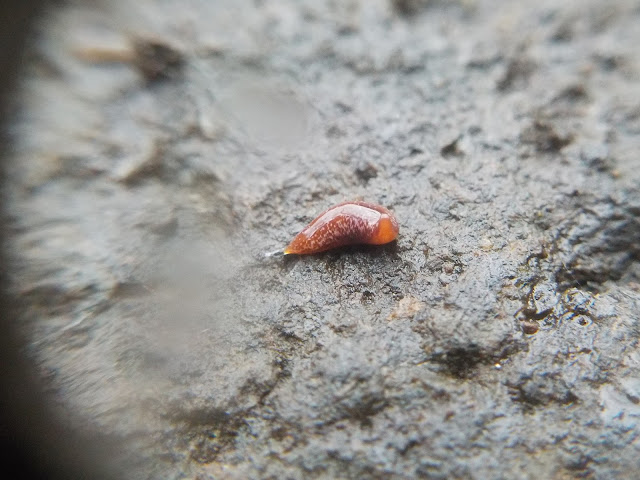 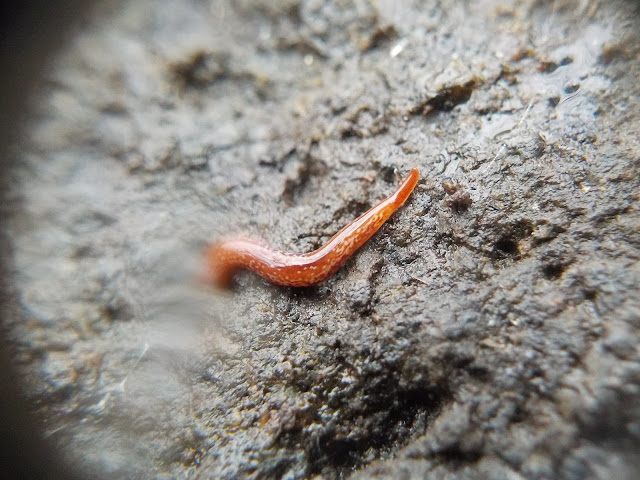 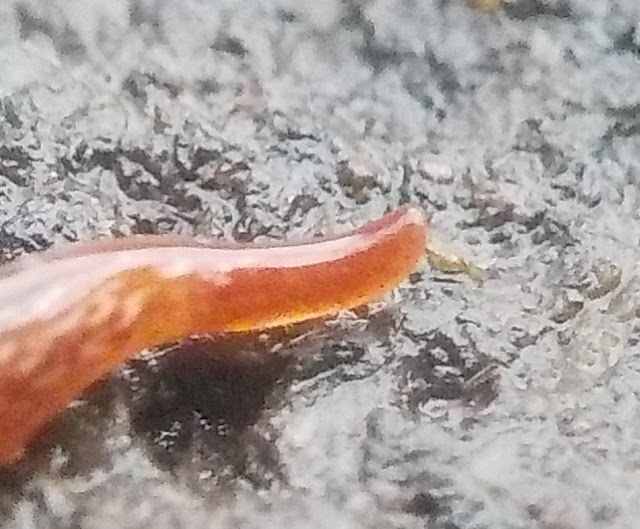 The last image is a mega-crop in an attempt to show the eye configuration. Meh, they're all pants shots but I whacked them on Facebook anyway. Brian Eversham (a flatworm expert and the guy who found the initial individual near Cambridge!) reckons it looks good for his species. Christian Owen thinks it looks good too, he found a couple in South Wales.  So there you have it, I've discovered the awesome Marionfyfea adventor new to Scotland and by far the northernmost individual ever discovered IN THE WORLD!!!! :) There's a really detailed account of the species in this paper published just three months ago, it lists all of the known sightings IN THE WORLD and there really aren't many!
I've emailed a chap at the Terrestrial Flatworm Recording Scheme asking if he wants the specimen. No reply yet. I don't have any pure ethanol laying about so I purchased a shot of 61% proof whisky from the bar downstairs, that'll have to do as preservative! I now have two glass tubes worth of the stuff sitting on my desk. No danger of me necking it, I bloody hate the stuff.

So as if yesterday's Kontikia andersoni and Microplana terrestris combined with today's Marionfyfea adventor wasn't already enough flatworm excitement to keep me grinning, I lifted a nearby rock and found this
Cor blimey, it's flatworm central up here! I'll soon be challenging Dave Fenwick's back garden in Cornwall for having the most species of flatworm recorded from a single site! Ok, maybe not quite that many...probably. Just have to see what else I can uncover over the coming months.

Of the slugs I didn't find anything different or obtain any new pics. In fact the only thing I took a photo of was this Copse Snail Arianta arbustorum. Ocys harpaloides, a smallish Carabid, was found underneath a stone, new for the site and my yearlist. 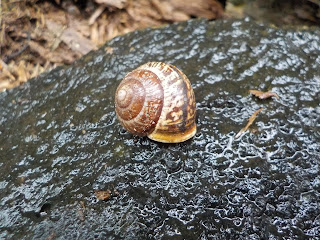