This year my two surprise groups have been Collembola and Molluscs, but coming up on the rails has been the Hymenoptera. I surprised myself by being able to identify two sawflies but even more so probably by managing to find four species of Andrena (almost half the known county fauna!). In large part this is due to this book: 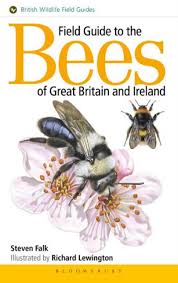 I bought it two years ago now, having been getting solitary bees in my hoverfly bye-catch. Naturally last year I caught fairly few. Yesterday, though, I keyed out my fourth Andrena species and I'm expecting to continue to add bees to my list which I wouldn't have bothered trying before. Of course the illustrations are nicely done too. This combination of author and illustrator on this subject matter made it almost inevitable it would be fantastic. There are many awesome books out there but generally their awesomeness is in line with their cost. This book is one of those rare bargains which manages to be both awesome and very affordable at the same time. This is Andrena haemorhhoa 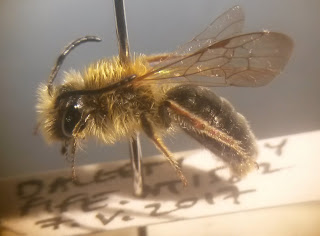 Anyway, in other news birds are trolling me now as a Whitethroat started singing beside my office. I have heard not a peep from all my coastal scrub. Also I embraced the ecology yesterday and swept some nettles for Nedyus quadrimaculatus. It was there in spades.