As usual it's actually one day early but what the hell. A 7-spot ladybird larva at lunchtime became the 49th beetle. Would be nice to round it off tonight but I am socially engaged and chances are I won't add anything this evening (unless my visitor can be persuaded to go moth hunting - a possibility).

All-in I this year have added 945 records to iRecord of 739 species. Obviously not all are from the square or my total would be transformed! However, here are the numbers as they stand right now. Possibly to be slightly updated tomorrow.

Going into June I am looking at some reduced time - I'll be grinding through pitfall trap contents for St.Andrews bioblitz (we do process them after the 24 hour period for an overall total) and then I'll be going on holiday. Still, June ought to be productive enough that I can more or less make good. I kind of expect to reach 1000 during August-September so it will include the start of the vismig calendar and include exotica like Tree Pipit and Long-tailed Skua (bird gods willing). On the other hand those months could be so profligate in their affections that 1k comes and goes before the skuas appear (but not the Tripits which pass in July). The big decision - declare or bat on? Only time will tell.

The numbers by "gross" taxonomic grouping

The numbers by, erm, numbers 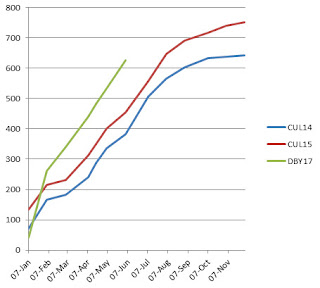