Dalgety Bay - The Beast from the East

Well, that was quite a thing. Off work but unable, mostly, to get out. Nevertheless when I did get out it was a kiss from the princess. Not for all those weather casualties, of course, but it did bring some "patch gold" as farmland birds were forced into the tiny patch of exposed grass in my square. My first Dalgety Bay Golden Plovers showed up after not seeing one in the previous 20 years. Yellowhammers, Skylarks, Reed Bunting, Snipe. A bonanza. Churlish to complain about the lack of Little Auk, LT Duck, Scoters, Fulmar, Gannet ... and where are those Fulmars? They should be here anyway!

Here's some pack ice in the bay - very bizarre 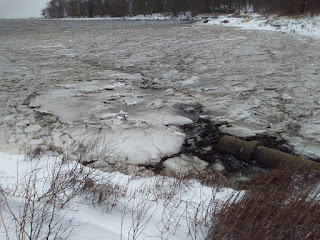 
One of my favourite things from yesterday was the hydroid Obelia geniculata, which even had a developing medusa like a little homunculus sitting in one of the "cups". From a Laminaria blade.