Can't believe I'm half way there with no leaves on the trees yet and snowdrops still in full bloom!

Half way point last year was 26th of April so just over a month ahead of the previous pace. Across almost all groups I'm on the same or better tally, although lichens are a bit off the pace. This isn't unexpected because I had a lovely (and well surveyed) piece of coastal outcrop which provided most species. Bryophytes, algae and fungi have been star performers, with the first two exceeding last year's total early on and the latter already matching 2017's August tally. Coleoptera continue to underwhelm, but then I've had little from leaf litter and I haven't placed any pitfalls this year yet. A nice surprise was having three echinoderms on the list already (or at all).

59 species have been lifers - 13%. Last year's overall lifers ratio was about 25%  but some of that would have been routine coastal/marine species which I'm finding again this year as not new.

Before the numbers, here's a lovely Polytrichum juniperinum I found this morning while out for a stroll. Growing on an old rope at the sailing club! 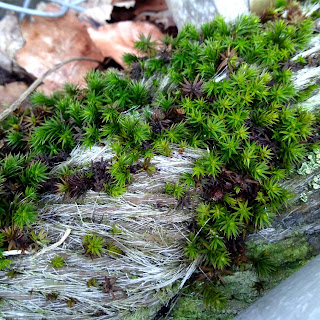