A double-digit day yesterday was a reminder of how generous the first flush of spring can be. Of course it's grey and damp today and a winter-plumaged RT Diver served as a reminder that we're not there yet. The Dunlin seem to have gone but Redshanks are still around.

This nice Alchemilla xanthochlora had formed under my nose (like many other things, probably) and is said in the county "Flora" to be common in grassy places.

I've set myself a target of 667 by month end, and after yesterday that's less than 3.5 spp/day - much slower than the current rate for April of 4.06 spp/day (I have a spreadsheet still set up from last year so I only have to read it off. Perils/benefits of working on a computer all day!) 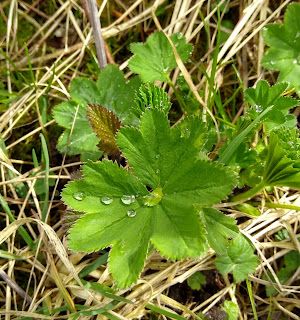 One thing I don't think I;ve mentioned yet is the reason there won't be any lugworms on this year's list...

This is from the time when the Bay was an airfield and clock dials with radium were dumped in the bay at the end of the WWII. Hot particles have been found and SEPA/MOD are currently undergoing works to remedy this (how exactly I'm not sure). As yet, no new species or superheros with the powers of molluscs/marine worms are known to have emerged as a result.