I feel like saying "at last" even though 900 just into June is a riproaring romp compared to last year!

Nothing spectacular happened to put a nice image on the happy event - just a gradual grinding away at commoner species and a lot of fly genitalia peeping. I should pass some of last year's totals very shortly - flies and spiders in particular. From here on rather than try to make the total as quickly as possible I'll probably chill out a bit and take it easy. I feel like I may have said that before though.

Here's a picture of my best find while out looking for moths the other night. You may be able to spot that it isn't, in fact, a moth but rather a Giant Polypore. Surprising how often fungi stand out in the dark. 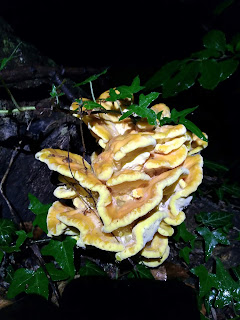