A few more species which are more or less routine, and with a fair list of birds which ought to be around things are ticking along relatively smoothly. I picked up three species of millipede yesterday but they just kill me. Two I couldn't identify and the other was a juvenile Polydesmus. No idea why I have such a hard time with them. I end up in couplets where I know both answers are nonsense. Maybe I need a different key.

Here are a couple of pics of things that I could identify.


Equipment feature - a £2 craft box for mosses and small fungi and a pot for catching non-flying inverts courtesy of my local takeaway. Both invaluable! 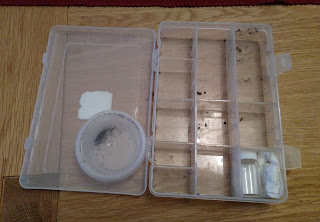 I also just noticed that today's additions bring the bryophyte total up to the year total for 2017! Still a bit of fishing left in that pond though.