Seth's comment to my previous post raises a couple of points and I thought I would elaborate.

The coastal soft rock cliffs in the square are indeed very bio-diverse and were a major reason for my choosing this square. They are especially noted for their invertebrates and are nationally notable for beetles (and I think Hymenoptera)

However in front of the cliffs to high-water is a beach mostly composed of small pebbles. This is not a good substrate for Algae at all. (or indeed any littoral wildlife!) Right at the western boundary of the square are some larger boulders which I expect to have at least a few algae on but have not yet visited at very low water.
I could add more algae/seashore life by either of the following.
Beachcombing. Certainly algae does get washed up but is not tickable?? This is strange when so many people were ticking dead washed up jellyfish last autumn?
The square has to be 1km squared but it does not - apparently - have to be an exact grid square. If I was to move the boundary 100m west it would improve things!

However for now I am happy to continue as normal. Any constructive comments on this would be welcomed.

Finally a photo of a beetle. This photo was taken by me at Eype last summer. I took the photo during my first ever twitch to see a beetle! Oh nooo what is happening to me?! 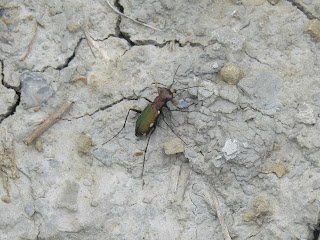