Dalgety Bay - stretching the (many, many) legs

A good weekend, especially for myriapods, took me comfortably over the 300 target. Partly this was a fortunate run of good luck and partly this was due to Seth setting a rip-roaring pace which encouraged me to try to keep up! It doesn't hurt that many of the species I met as new last year can be easily confirmed this year instead of labouring for hours over them. Lifer ratio is running at about 6%, as might be expected in the early days of new year, and nothing spectacular has been encountered so far.

The bryophyte total of last year has already been passed. The myriapod total is now equalled and with some easily encountered species not listed yet I fully expect to beat that too. It took me until March to count this many fungi last year! Probably over the next three days I'll major on microfungi. Since my wife's away I'll focus on gathering material for those long nights in. 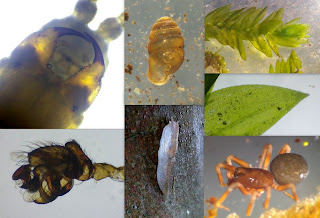