Still working through some weekend woodland material, but yesterday I spent lunchtime on the shore hoping for Little Auks and Long-tailed Ducks. I had neither but I did jam into Ringed Plovers, which I've only seen once before in the Bay in some 20 years. Tide was low so I did some boulder turning and wandered out into the bay to see what rock pools may be available. It's mostly sandy but there are some. Like my previous square the major pieces of rock that have pools have little by way of turnable rocks so I may have to make my own refuges to later find things in (traps?).

Find of the day was undoubtedly a new crab for me - the Long-clawed Porcelain Crab (Pisidia longicornis), which is apparently common in exactly such situations. My crab radar is set for too large, and this species has a max size of about 10mm. I probably overlooked it. This one was the worse for wear as I suspect I had damaged it while turning the rock. 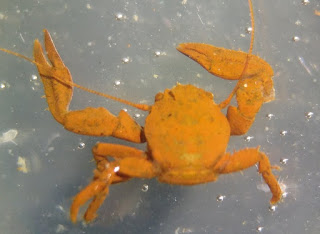 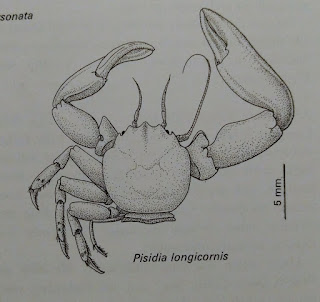 Another nice find from the weekend was Schistidium maritimum; a new moss for me. I knew of past records in the Bay but didn't know exactly where from. This is the first time I have ever measured a moss spore to confirm ID! (though I have checked liverwort spores on Fossombronia)

One more that I wanted to share is a fly I found end of December but went back to re-record in January. It's a lovely dolichopodid, Liancalus virens, which wasn't previously recorded in Fife. 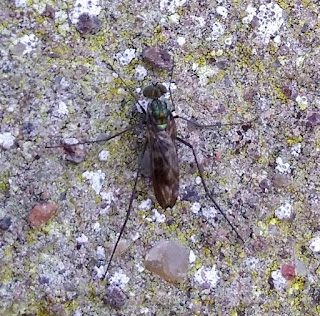