So maybe someone will remember this lovely duo - a Pipunculid and an intriguing small calypterate taken not only on the same day but in the same sweep. I had reservations about the initial tachinid determination of the calypterate and when I whipped out its bits I was pretty convinced it was a sarcophagid. Turns out to be true, and what a tiny sarcophagid it is! I'm used to them being enormous - usually the biggest flies in any batch and longer easily than both these placed end to end. Maybe I can post a side-by-side later.

Anyway, finally I cleared the decks enough yesterday to determine that it's Pierretia nigriventris, which I thought was new for county until I checked NBN this morning. It wasn't in the Nature of Fife 2006 county list though so it's new-ish! It has a curious distribution on NBN, which seems to include about 75% of coastal squares in Wales! 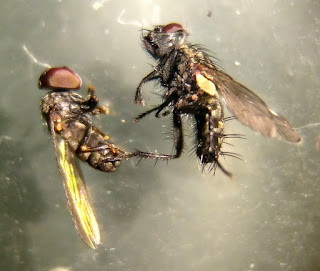 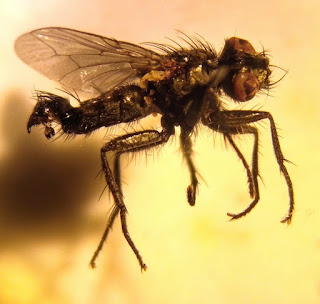 Everything else is more-or-less routine apart from a new hover for me in the shape of Neoascia tenur (which may turn out to be N.meticulosa ... but still new in both cases!)