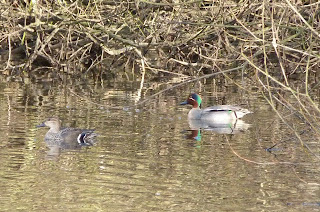 An unscheduled visit to my plot yesterday .... so time for a brief walk around the TQ6410 block (Herstmonceux Castle) on a bright and breezy but decidedly chilly morning. First things first - a hidden woodland pond and a flock of 15 Teal .... which gave me an idea to belatedly try pond-dipping when I got back. And yet another Woodcock .... but no more bird ticks yesterday. 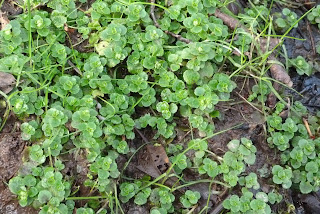 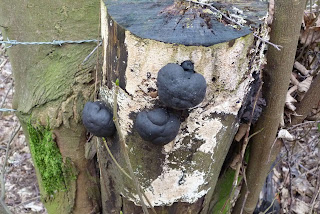 I suspect there's two for the price of one here but can't yet be too sure what the white stuff is behind the King Alfred's Cakes fungus (left) on this sycamore stump ..... possibly Cylindrobasidium evolvens .... but there are two or three very similar fungi? Also found Blushing Bracket  Daedaleopsis confragosa on willow at the wet woodland edge. 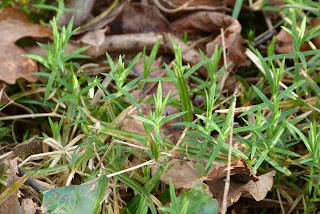 Just off the bridleway, some fresh stems of Greater Stitchwort Stellaria-holostea. Also came across Kentish Garden snail Monacha cantiana and Pill-bug woodlouse  Armadillidium vulgare, both  amongst rubble under my plant benches back at the plot. 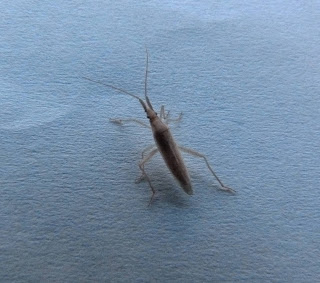 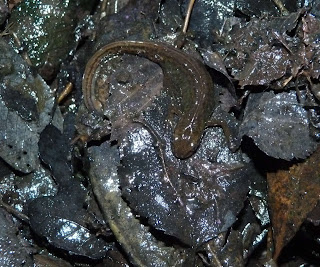 And so to pond-dipping:  Caught this little Pond skater-like thing which could well be, er ..... a Pond skater Gerris lacustris (?) but it WAS tiny ....

..... and the inevitable Smooth newt Asellus aquaticus  as well as a Waterlouse Lissotriton vulgaris or three ......  And just for good measure, I fished two more Common toads out of the cattle trough 'well' inside the barn. 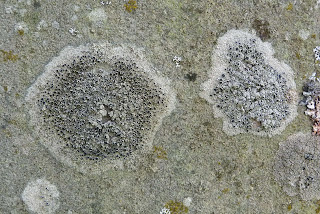 Last but not least, the now essential diversion via the churchyard on the home leg ......  This looks very much like Aspicilia calcarea according to my elderly guide book (and supposedly a limestone lichen) .... but then this was on one of the tombstones .... 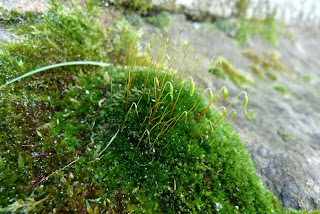 Lots of mosses in there too - this looks like  Bryum capillare (left) ..... again, according to the good book. And I also managed to confirm Cladonia coniocraea from last week's woodland forage. 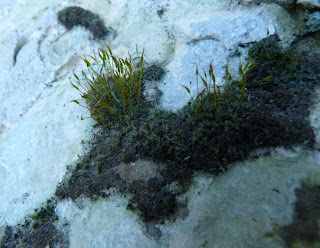 But no idea what this one is .... yet ..... on the wall of this ancient church. One or two others still to identify too. 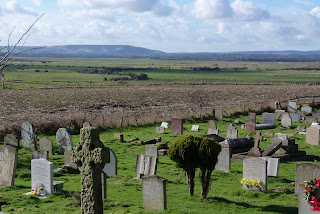 And finally ..... Pevensey Levels and the South Downs above Willingdon from the churchyard (All Saints Church,  Herstmonceux). The maize field is still inside the square ..... just. But no farmyard birds there yet (house sparrow will do).  So another 15 to add to the list yesterday.

Which leaves me stumbling along in the Gibster's slipstream with 220 species.