This was my first visit since taking up the all-taxa challenge without a covering of snow, so I stretched my plant knowledge and notched up Dog's Mercury, Lesser Celandine, Daisy, Dandelion, Ribswort Plantain Ground Ivy and Lesser Burdock. A scouring of some likely trees produced some Turkeytail and Elder Whitewash (I also appeared to have found the only Elder in Norfolk that doesn't have Jelly Ear growing on it). From reading previous posts I'm taking it that we aren't counting Bramble (agg) or Bramble rust, so neither of those are included in my total. Using a basic key I ID'd the three commonest lichen species, taking me up to the giddy heights of 66 species. 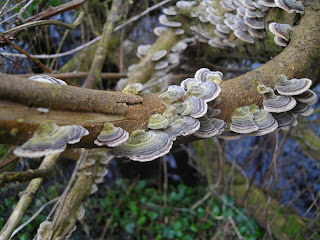 Email ThisBlogThis!Share to TwitterShare to FacebookShare to Pinterest
Labels: TG2507