Been very slow for a couple of weeks with only a few species added - I'm waiting for a few ID confirmations so no total but around 135ish probably. Best species for me has been Haplophthalmus danicus (waiting confirmation). Under a log I was just about to put on the fire so pleased I spotted it in time. The log, however, did come from Somerset courtesy of my mother but presence in a square is a record - the first Haplophthalmus of any sort for my 10 ksq.

Stuck the moth trap on last night for something to do:

I have only really started looking at micros since the start of this challenge and had recorded one so far (Agonopterix heracliana). Last night, I picked this off the wall - apparently Acleris umbrana but happy to be corrected. 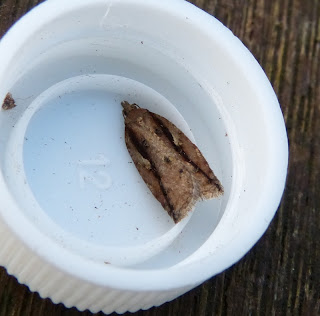 A few other bits and pieces including Opposite-leaved Golden Saxifrage, Mullein, Lesser Black-backed Gull (not easy on the square) and some troublesome snails. The one below keyed out to the last species in the key which always worries me but the hairy shell should make it Ashfordia granulata? 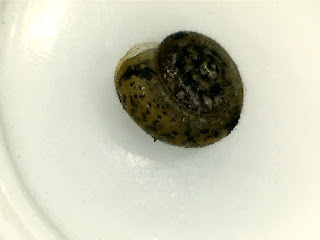 Posted by Rich Billington at 2:19 PM