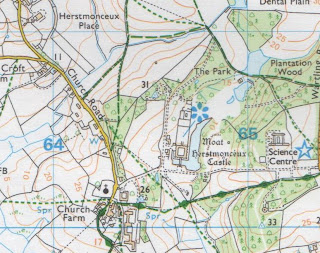 As 1km squares go, TQ6410 is pretty good really. One major plus point is that it only has one road (AND my wildlife plot - 2nd plus point) ….. half a mile of quiet country lane that finishes in a dead-end at Herstmonceux Church.  And there’s the 3rd plus point, as I discovered yesterday afternoon. In twenty years of owning the plot (300m down the road), I’d never been inside the church before (heathen) and only rarely walked around inside the churchyard (a fabulous panoramic viewpoint across the Pevensey Levels to the South Downs above Polegate …. not even mentioned in the parish link above).  Yesterday afternoon I spent a whole hour in the churchyard, totally bamboozled by lichens and mosses, a couple of unknown trees (didn’t recognise the bark) but grateful for yet more, mostly common plants and a couple of new ferns. I’ve also made two more visits to my overgrown plot this week but haven’t yet laid siege to Herstmonceux Castle grounds and its 600 acres of woods, parkland and gardens right next door. There should be one or two more species looming in there somewhere …. which makes the Castle & grounds plus point number four for the square.

So that’s TQ6410 in a nutshell …. church & churchyard, castle, wildlife plot, farm, open farmland, woodland, park-land, a piddly stream and three interesting lakes (the latter all inside the Castle grounds). One of the lakes even doubles as a sizable moat (Red-eyed Damselfly and various other odenata bits & pieces?). Fish too maybe? The Castle grounds sometimes have House Martins and Crossbills .... hopefully. Plus point number five - the Pevensey Levels: Two ditches get the briefest of look-ins to the extreme west and extreme south of the square, one spot having Ruddy Darter and Hobby, the other - Four Spotted Chaser .... possibly?  Highest point in TQ6410? The dizzy heights of 31m a.s.l. just beyond my little bluebell wood a.k.a. the ‘top triangle’.

Another 27 species this week - and rising - if I can ever ID the beetle, slug and all the mosses! 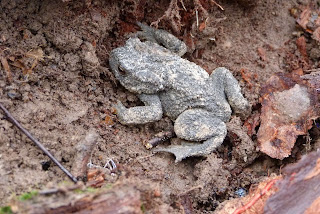 Birds: Forgot to log Carrion Crow seen last week.  Wednesday: Canada Goose (flock of 23 overhead) then a fly-past Yellowhammer calling (occasional in this square but common in the one next door to the west). Thursday: Kestrel soaring over the plot then trying to hover/fly into a very strong south-westerly F5, strangely with its under-carriage down.
Earthworms: Lobworm (Lumbricus terrestris) under the rotten larch log. Blimey …. didn’t know there are at least 25 species of earthworm!? 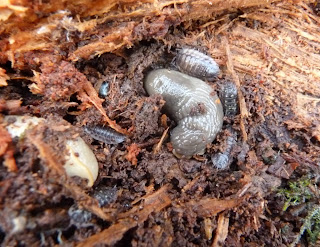 And a nice fat grey slug (left) under another log in the bluebell wood ..... but which one? All the guides suggest grey slugs are either huge or very small. This one's got a (blurred) upside down mate next door and is about er .... 3 woodlice in length! 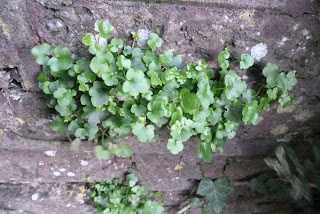 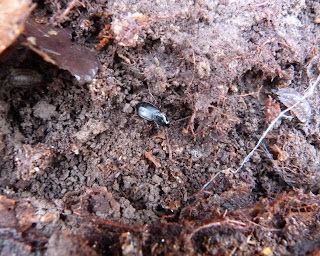 And a ground beetle (left) not much bigger than a woodlouse! 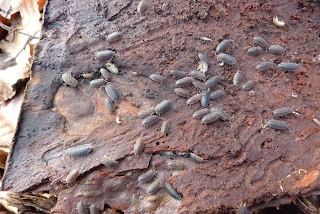 Woodlice heaven under the bark of an old larch log ..... only Common Shiny Woodlouse Oniscus asellus, Common Rough Woodlouse Porcellio scuber so far .... but not necessarily both in this pic. 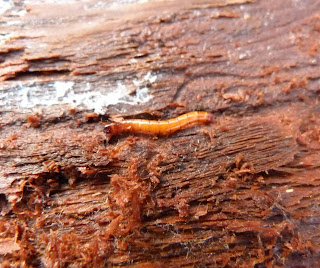 A wireworm (left) also under the bark of an ancient larch log in the bluebell wood but larva of WHICH click beetle?? 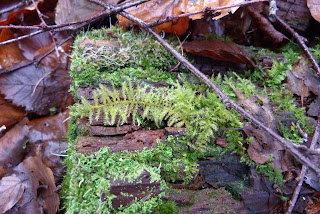 Mosses: Think there's possibly three species in this pic. I was trying to photo the fern-like moss in the centre but it looks like Lophocolea cuspidata above it and another below. Also found Polytrichum commune, Barbula convoluta (I think) in the woods or around the churchyard …. and several more to try and ID. Might have do a seperate post for these - mosses are doing my head in!

Trees and Shrubs:  Norway Spruce (dodgy again?), Common Dogwood (both in the Castle grounds). Also a mystery plant and an ugly bracket fungus on birch too.

203 species by the end of January …. much better than expected. February’s bound to be lean by comparison but on 1st March I can return to roughing it in my cabin on the plot for all the seasonal conservation stuff .....
Posted by MikeM at 12:24 PM