Not done much since about the 18th, wife went into hospital for a small op. Now bedridden for 2wks, so most of my spare time is focused here. Doesn't look like I'm missing much with this weather though? 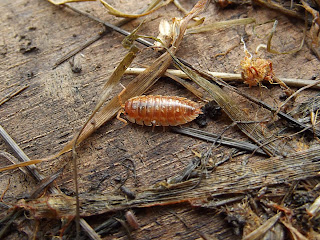 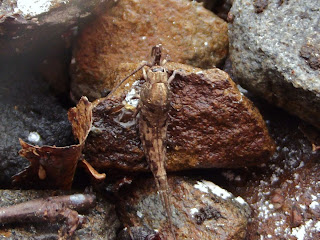 There was this Dilta sp that turned up.  Not sure which as this was a female, D. hibernica and D. chateri are both found at this particular site. D. chateri being the most common. Not seen those markings on any of the ones i'm familiar with. I also got stung by what looked to be an Ichneumon insidiosus before finding this. Not painful but it did make me jump, making me spill and loose some of my catch as i had the lid open on my pot lol.

In no particular order... 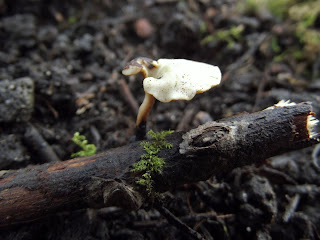 175 Polyporus leptocephalus - (Fungus) Plenty about in this particular area at the moment, found most while sieving through some of the usual ground litter.

179 Senecio jacobaea - (Ragwort) Dug out from the garden veg patch. 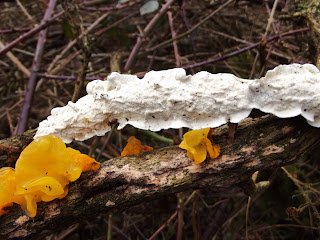 180 Tremella mesenterica - (Fungus) Growing from gorse, along with its host a Peniophora sp. From what i can make of it from the various literature i've checked its P. incarnata if its on gorse. Further up on same branch was Byssomerulius corium...thanks to Chris Yeates for id, saved me crashing back through the heavy brambles to collect a sample. 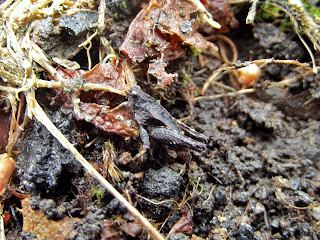 191 Tetrix undulata - (Hopper) Managed a quick view of this before it sprung into action and disappeared down a scree slope.

193 Anas platyrhynchos - (Mallard) A overhead pair that flew up from the river below.

197 Sarcoscypha coccinea - (Fungus) Been finding these in a few areas this past couple of weeks. All attempts from me in the past have shown them to be S. coccinea in my area (tips gleaned from experts on WAB), these where no different. Perhaps i should send some off to the local recorder to be doubly sure...will report back on this one.

198 Dendrocopos major - (Woodpecker) This made my morning, a garden first. Nearly missed it as i was scanning the valley for various birds etc with my bins.

199 Mustela nivalis - (Weasel) Can't believe i forgot this one, nearly run it over as well. It was seen crossing over a bridge heading up the river bank. Great find for me, the last one i've seen here has to be over 10 years ago (memory is crap, so i may be lying).

200 Nuctenea umbratica - (Spider) Another one i forgot to add...Tucked in behind a fence panel in the garden.
Posted by Christian (Sparrow) Owen at 11:08 AM