Looks like things are starting to warm up. The garden pond now defrosts through the day, still no frogs though. Got myself up to 226...Viewed the first 2 from the car on someones garden bird feeder.

Another quick nose about behind the local fuel station edgeland. Hoping for Ghost slug which can be found fairly easily here. This cold is probably keeping them underground as i've yet to find any this year. Checked the small water filled ditch for signs of Frog, not a sniff. Did find a few aquatic plants...

209 Ardea cinerea - (Heron) Sitting on a low branch over the river that acts as a boundary for site.

211 Potentilla sterilis - (Barren Strawberry) Growing in the cracks of the steps of the old building that's still standing.

215 Tinea pellionella - (Moth) First moth of the year, found in my mates kitchen...he wasn't to happy when i told him what it was.

A quick visit today to one of the small quarries in the area, regularly nested by Kestrels. Hopefully the rock climbers that has recently rigged this place won't disturb them from nesting this year. 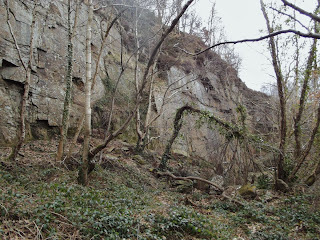 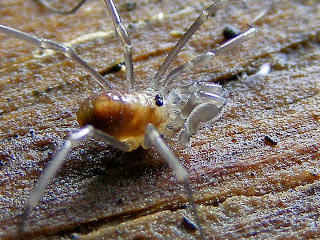 217 Sabacon viscayanum ramblaianum - (Harvestman) This harvestman has to be one of my favorites with those quirky Pedipalps. They seem to favour the more shadier spots. I usually find them under stone or board that's got good contact with bare earth...(photo taken last year)

220 Neuroterus quercusbaccarum - (Spangle Gall) Plenty blown under some of the larger stones. First time for me to open one up, contained withing was an adult wasp which did not survive the ordeal.

223 Cladonia coniocraea - (Lichen) Farily abundant on the fence posts around the perimeter of  quarry. 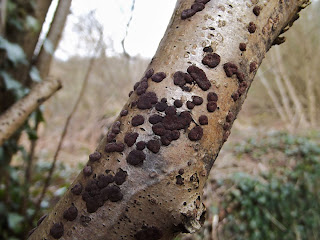