Still bogged down with plants ..... literally ..... and bits and pieces. And still cold and grey for the last ten days .... until Sunday lunchtime when something amazing happened - the sun appeared!  It's been depressingly grey and chilly here in Sussex so I haven't been too bothered about looking for inverts these past few days .... or anything else that meant taking gloves off.  So the wet woodland and ditch south of the Castle were the main hope for finding something new .... plus I still had a few things to ID from previous walks and photos. 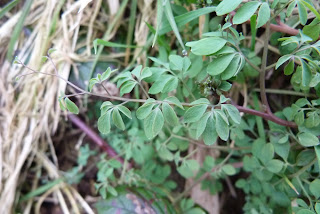 264 - Common Reed  Phragmites australis  ditch south of H.Castle. No excuses - I  just plain forgot this one ....

265 - Crack Willow  Salix fragilis  in the wet woodland and also roadside near Herstmonceux Church. Have walked straight past them most times.

266 - Pendulous Sedge  Carex pendula  (big clumps of it in the wet woodland). 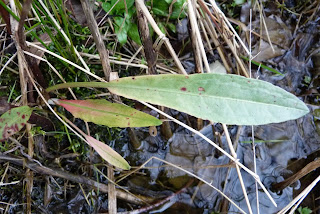 267 - Great Water Dock  Rumex hydrolapathum  growing horizontally for some strange reason (the photo's the right way up). This one was in the ditch by the edge of the wet woodland ..... but don't expect to find any Large Coppers around there. Bizarrely, there's also some Milk Parsley growing in the 'just-out-of-square' pond nearby -  one of  the  few places in Sussex to find  it ....... hmm ..... Swallowtails? 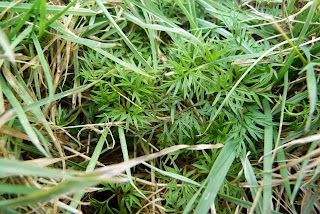 268 - Pignut Conopodium majus (left) .... masses of it pushing up in the sheep field below Herstmonceux Church.

269 - Hairy Woodrush Luzula pilosa  in the rookery wood next to my plot.
270 - Wild Raspberry Rubus idaeus  along bridleway near the  rookery wood
271 - Hairy Bittercress Cardamine hirsute  along the bridleway. 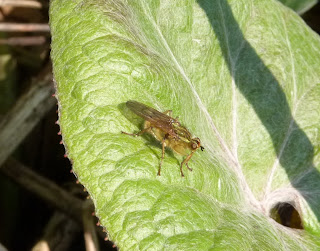 I raced back to my plot from a very hot and smoky BC work party at the Rowland Wood reserve to try and make the most of Sunday afternoon's spring sunshine. First Brimstone of the year maybe?  First butterfly of the year even??  Well, it was yellow:


272 - Yellow Dung Fly  Scathophaga stercoraria fleetingly (left). Not a great pic  - but yet another fly basking on the Winter Heliotrope leaves.


Stragglers from previous forays:
273 - Lichen Hypogymnia  physodes .... on oak and other trees around the plot.
274 - Couch Grass Agropyron repens .... under the plant benches.

275 - Crown Vetch  Coronilla varia  .... an accidental 'escape' via seed. Nearest thing I've  got to a triffid in the wild flower banks - beware of it in your garden even though it's a great bee plant. 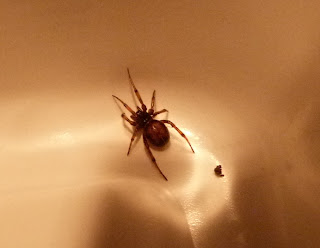 The moth trap came out optimistically on Saturday night at the plot but after four hours, all I'd caught was this tiny unidentifiable thing (another dodgy photo  ...... and ID?). Assume it's some sort of money spider and was probably hiding in the moth-trap egg boxes. It's about 4-5mm.

Much like a birdrace, the Challenge is becoming as interesting for what's NOT on the list rather than what IS!  Still no sign of: butterflies and moths, odenata, Greenfinch, House Sparrow and ..... Grey Squirrel. The latter must be hibernating in Herstmonceux but active in Ashdown (Forest) ..... loads in the back  garden where I've been staying this winter. A flyover pair of Ravens on Saturday looked promising but I was 500m south of TQ6410 .... and then they diverted east. Mean!

Now got reports to write by Wednesday evening .... so how to make the best of some decent spring weather today and tomorrow?  Just can't miss it  ....