SX9192 Colours from a grey square

I've seen a lot more of my home square than ever before, and it's not looking promising for the 1000 target, this despite Exeter being very lucky in some respects (the Exe runs through it, we've got peregrines nesting on the heights and otters down at the mill). The most disappointing area is actually the huge swathe of green desert that makes up the playing fields, the only good bit of which is some rough ground along the railway line.

Then of course the weather, grumble, grumble, but everyone's been suffering through a rather prolonged winter I s'pose!

On the upside, the inward focus, with half an eye on the other blogs has led to some interesting finds.

Anyway, here's the updates to my list to the end of March:-

116 Tortula muralis, Wall-screw Moss - Abundant on the local walls
117 Placynthium nigrum, A lichen
118 Bryum capillare Capillary, Thread-moss
119 Phalacrocorax Carbo, Cormorant - Hunting down on the river, and flying over
120 Leptogium gelatinosum, A lichen
121 Diploschistes muscorum, A lichen
122 erigone atra, A money spider - A female, epigyne lifted for Id.
123 pholcus phalangioides, Toilet Spider - This is the reason we don't have any tegeneria in the garage.
124 Ectopsocus petersi, A barkfly - Lifer, beaten from cupressa
125 Kleidocerys resedae, Birch Catkin Bug - Beaten from cupressa near birch
126 Lecanora campestris, A lichen
127 Lecanora dispersa, A lichen 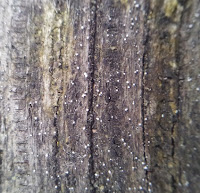 129 larinioides sclopetarius, Bridge Spider - Surprised to find an adult female surviving out in the open on the edge of the subway. Somehow she survived winter and a thousand passing pedestrians. 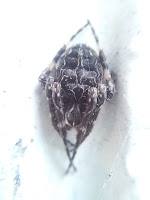 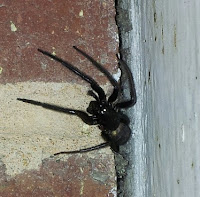 137 segestria florentina, Black Snakeback spider - A suprising number of large florences were active from early on in the year. A common spider in the square. Every old wall has at least half a dozen secreted away by day, lurking with their green fangs shining under torchlight at night. Easy to tempt out with a blade of grass, and the tuning fork sends them mental, fortunately the savagary they inflict on it hasn't got as far as my fingers.. yet. 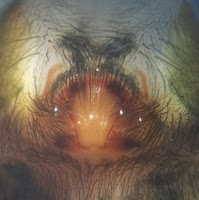 155 Tegenaria saeva, A house spider - Tempted out from a drainage hole with a tuning fork, got more than I bargained for when a large female teggy came out biting. The house spiders are probably responsible for putting off more would be arachnologists than any other spider as the common species pair t.saeva/gigantea can be a 'mare to sort out, females especially so. The trick is to line up just right on the epigyne. This one is a classic t.saeva (as would be expected here in the SW) with two large dark holes still visible from this angle. T.duellica should show much reduced openings ~ provided the viewing angle is perpendicular! 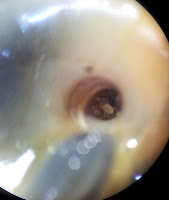 173 Cornu Aspersum, A snail, a lifer, interesting enough, but..

174 ricardoella limacum, A mite - The interesting snail had an even more interesting hitchiker! Slug mite. I've found literature which suggests this is the snail mite r.limacum, and the sibling species r. oudemansi inhabits slugs, but the current accepted view is that the two species are one and the same, with r.limacum being the preferred species name (except for on the NBN which oddly gives r.oudemansi priority)

175 Limacus flavus, Yellow Slug  - I placed this one in a small plastic container whilst I went to fire up the slug key.. and it did a Steve McQueen on me. Moving suprisingly fast for a mollusc it managed to get out the container and most of the way across some nice furniture. The yellow line down its back earnt it the name l.flavus. The yellow line across the furniture earnt me a few names as well. None were in latin though.

Went out for half an hour not expecting much, and whilst Nicola was checking the leat I was looking up to locate a soft, half remembered, trilling call


180 Rumex obtusifolius, Broad-leaved Dock
181 Syrphus torvus, A hoverfly - On a window sill, very finely hairy eyes, full microtrichia on 2nd basal
182 Caloplaca crenularia, A lichen - on stone wall
183 Phylloscopus collybita, Chiffchaff - In contrast to some reports from the East, chiffs were all over the square, from February onwards.

184 Phyllonorycter leucographella, Firethorn Leaf Miner - dissected a leaf mine and sure enough, there was the occupant

186 Leuctra Hippopus, A stonefly or needlefly, - From wall alongside canal. Having pinned the hapless insect, I got half most of the way through the key on tarsal characters and wing venation, but the male terminal segment didn't look anything like the nice clear cut picture in the key for the species I ended up at...

Until I finally followed the advice laid out clearly at the start and put the abdomen in cold KOH for 24 hours. Once it was cleared.. a perfect match. 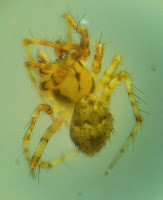 199 ero furcata, A pirate spider From same triangle of heather between busy roads. A small spider with very, very, slow menacing movements then a fast strike. As it did on the beating tray when a small tetragnatha sling got too close. Sadly, like most spiders, this interesting species has to be killed to identified, as the palpal differences are slight.. My picture does not do it justice. Arrr.

200 lepthyphantes minutus, A money spider The largest and most distinctive of this common but difficult tribe.


Some things are just beyond my literature/expertise/skill. Some of the local polypodys are giving me grief (sure the little **** hybridise). Then there was a Pollen Beetle, probably meligethes aeneus but how to be sure? And a little blue flea beetle as well, ack.

One of the many good things from this 1kSq project - spider records in the square are on the up. Last year I recorded 14 species in the square for the Spider Recording Scheme, taking the total to 15. This number paints my little square a pale blue on the SRS diversity map. Already I've recorded 16 species for 2013, by year end, I may not hit the 1000 over all, but the all important spider diversity square *will* be a new colour...

Cheers, and happy hunting,
Matt
Posted by Unknown at 12:42 AM