A week or two back I rashly predicted that the weather would be on the up and spring finally underway by  ..... er ..... last Friday! Well, I was sort of correct (just two days early). Saw my first Swallows on Pevensey Levels on Thursday and by Friday, singing Blackcaps were back on the plot (a whole 12 days later than 2012) and Lady's Smock was finally flowering by the barn and little wildlife pond. What I've quietly brushed under the carpet is the fact that it rained half of Friday, poured down much of Saturday afternoon and evening and the temperatures were still struggling to get into double figures. Then yesterday (Sunday) it was suddenly SUMMER ...... 21C in mid-afternoon (yet barely 10-11C on Friday/Saturday in the rain) ….. three species of butterfly around the plot and ALL the birds singing away .… and about time to!  New ones for the square are still trickling in thankfully ….  Willow Warblers and Swallows yesterday ….  And more moths last night - quite a few in fact. Have had a lot of trouble with fonts randomly changing on Blogger last couple of evenings so this is a second -  correction - third attempt - no, fourth time with this posting ..... 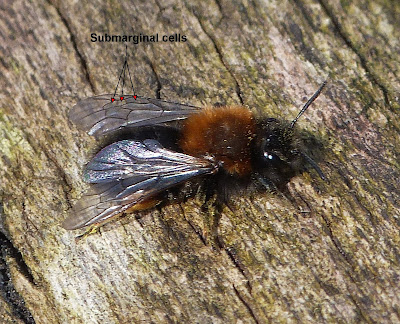 "It's not Osmia pilicornis I'm afraid, but it is another early mining bee, Andrena clarkella (left). This is one of the first bees to emerge in the spring and is quite distinctive with black hairs on the head and abdomen and ginger hairs on the thorax. Osmia pilicornis does look similar to this, but is not as hairy and the ginger hairs extend onto the thorax. One way to separate Osmia from Andrena is by looking at the submarginal cells on the forewing, which you can see very well in your photo. Andrena have 3, whereas Osmia only have two ..... 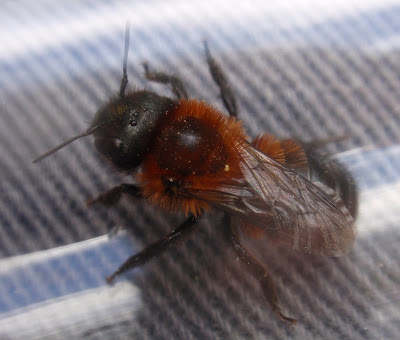 ..... I suspect that Osmia pilicornis (left) might not be out until the end of April (or perhaps later) this year because spring has been so slow arriving. Andrena clarkella would usually be out from the beginning of March, but in many places it is only just emerging".

Well, you probably knew all this already but if you find Osmia pilicornis in your square, the RSPB's mining bee expert will be very interested .... but don't hold your breath - these bees are pretty scarce!  Anyway ...... 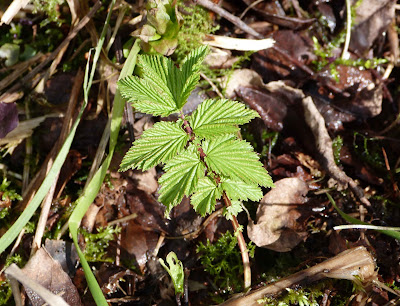 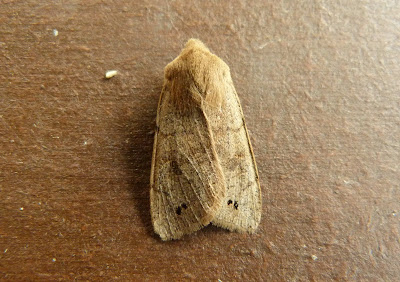 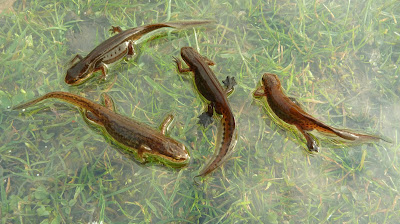 378 - Palmate Newt  Lissotriton helveticus  12/4 (the two on the right - note webbed back feet and strange tail tips). All caught in one bottle trap yesterday. 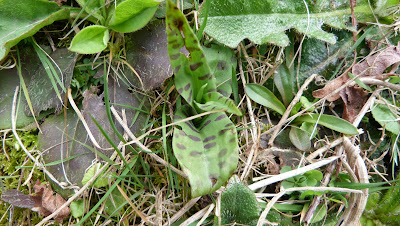 386 - Noctule  Nyctalus noctula - one of the locals finally out of its winter slumber circa 20.30 on 14/4.   I'm assuming Noctule as the clearest 'slow hand clap' on the bat detector was down around 20khz and I'm pretty sure it wasn't the barn residents (Brown long-eared @30+mhz) .... 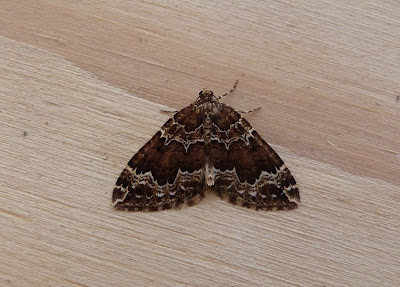 And a couple more moths in the trap last night 14/4: