Another brief burst of spring on Sunday and early signs of what I’ve let myself in for with this challenge - a sudden rush of invertebrates - OK, a trickle of invertebrates then. The last few days have also seen a few more useful birds added to the list - none more welcome than - wait for it:


349 - House Sparrow !!  I’ve waited more than three months for one - then three turn up.  Bearing in mind there are only about TEN houses in TQ6410  (excluding the Castle and Church), to suddenly find one or two House Sparrows cheeping  away under the eaves of three  different  cottages in various parts of the square, all came as a bit of a surprise. A bit like Greenfinches, they’ve been noticeably absent here for most of the winter then bingo – they’re back. But where have they been? Suburbia? Hiding under the tiles? Never mind satellite-tracking the Cuckoos, we need to start tagging these rural House Sparrows!
350 - Lesser Black-backed Gull  - a pair over the arable field near the Church with the Common and Black-headed Gulls. They turn up from time to time from spring to autumn, especially when the farm tractor’s been busy ploughing.

351 - Kingfisher - has to be my bird of the week, despite the gallant efforts of the HS. First noticed one on Friday am along the little ditch just south of the Castle (and square). I figured - slightly unethically - that if I kept walking north towards the Castle (which I had to do to get back to the plot), it would simply fly north along the ditch for the next 70m or so straight into TQ6410. Wrong! It hid in a blackthorn overhanging  the ditch, waited for me to walk past then flew back south (probably thumbing its beak at me). It called as it flew off, an echo-like whistle that suggested there were TWO birds rather than one. Naturally, I returned to the same ditch early Saturday morning and again approached from the south. No Kingfisher(s) …. until I reached the southern limits of TQ6410 …. and there they were already in the square, a pair of them. This time they flew on northwards even further into TQ6410 to where the recently de-scrubbed ditch almost peters out below the Castle’s sewage works’ thicket (of nightingale fame).  The pair flew on through the trees there and straight over to the Castle’s moat and lake where they presumably do their fishing.
352  - Wigeon - Another turn-up for the books …. a small flock flew over the plot at dusk on Saturday evening, whistling softly while I was trying to track down a bat I’d just seen flying  along the upper meadow edge. First ever Wigeon for the plot and square. Amazing what flies over at dusk – there’d already been two flocks of Teal, a couple of Mallard and the usual Woodcock or two that evening. Thought I had a Water Rail  overhead too on Sunday – bizarre call in the gathering gloom. As to the bat, well, it COULD have been a Noctule  but there are also Brown Long-eared’s around the barn and Pipistrelles along the rookery wood bridleway and by the church. The bat detector only picked up a fleeting ‘wit, wit, wit, wit’ so pretty inconclusive. Must try again.

Elsewhere around the square …. 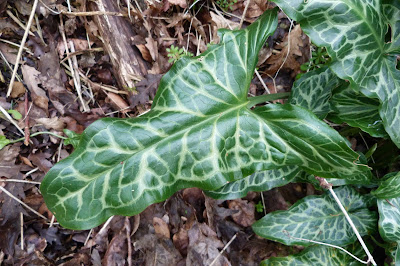 These last three all in the far corner of the rookery wood, only about 100m from my plot last Friday (5th April). 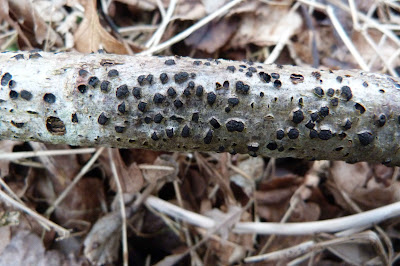 356 - Beech Barkspot Diatrype disciformis on a twig in a corner of the plot on Friday. 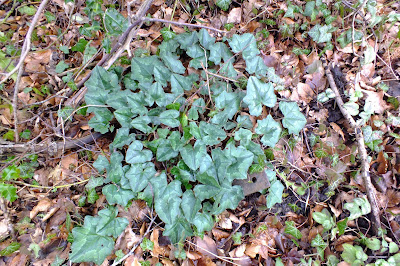 357 - Ivy-leaved Cyclamen  Cyclamen hederifolium  presumably dumped but now well established in a woodland verge/field edge near my plot and 50m from the nearest  garden. 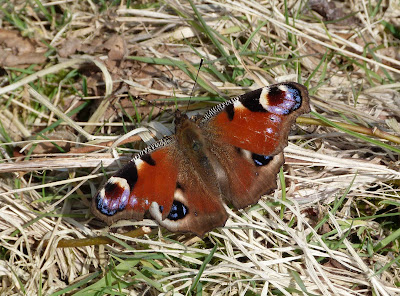 358 - Peacock  Inachis io (left)– basking in a scrubby woodland clearing near  the Castle
359 - Hare  Lepus europaeus - in a rough meadow just 100m N of the plot. Was expecting one to turn up in the sheep field W of the Church sooner or later but this location just north of the newly discovered watery ditch near my plot was quite a surprise ….

361 - Bank Vole  Myodes glareolus  – it’s made a nest under the corrugated sheet I’ve put down on the plot for Slow worms and Grass snakes. 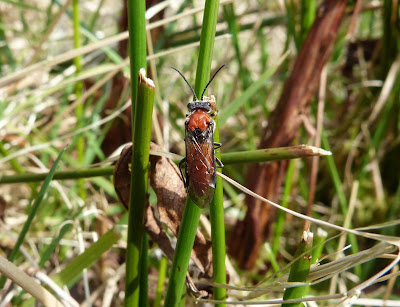 363 - Sawfly  Periclista albida  ….  looks a likely ID for this beast but happy to be corrected. Sawflies aren’t exactly my area of expertise. For the record, it was in the same scrubby clearing as the Peacock …. mostly bramble-strewn, re-generating silver birch but with some oaks as well.

And a few other mystery invertebrates: 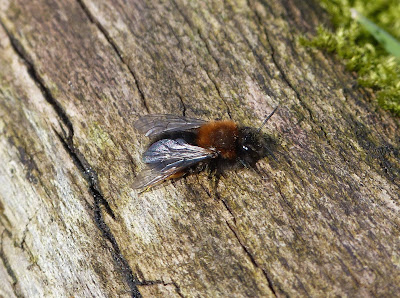 This looks a bit like Early Mining Bee  Andrena haemorrhoa  …..  but then I’m not too familiar with solitary/mining/mason bees either. Stupid question but I don’t suppose it’s a female Fringe-horned Mason Bee Osmia pilicornis by any chance?  We’ve been asked by the RSPB to look out for these woodland clearing rarities in Sussex ….. and I photo’d this one in a potentially suitable woodland clearing  i.e. warm, coppiced site with dead wood, bracken, re-generating  scrub, and Ground Ivy present? 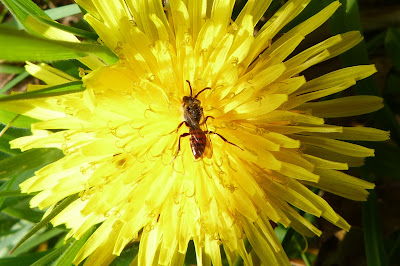 Another mystery bee (?) on Dandelion. Not a great photo but it was very small  ….. 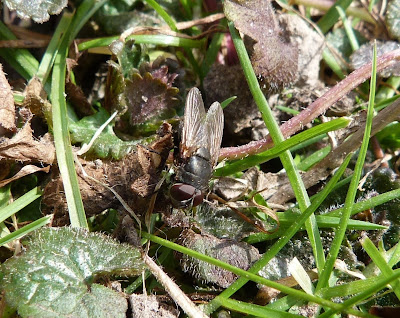 And just wondering if this fly is possibly Morellia simplex by any chance?
Has spring finally woken up at long last? Expect to hear Blackcaps on the plot any day now …..