I have spent some time today trying to get photos of insects in the garden.  I have been experimenting with using an extension tube in conjunction with my Olympus SLR and my 70-300mm zoom.  This has started to give some half decent results but it is quite a bulky set-up.

We have lots of small mining-bees in the garden which I have never identified to species before.  I am happy that this one is a Tawny mining-bee.  It was sunning itself in the hedge.


However the main colony of bees have their nest entrances around some loosely laid slabs near the house, and these are a different species which I think are Yellow-legged mining-bees Andrena flavipes.

If this is correct then the cuckoo bees which I saw disappearing down the nest holes would be Nomada fucata. 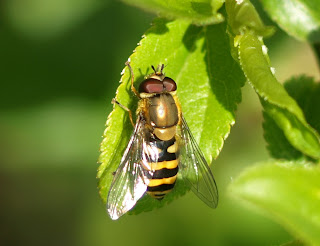 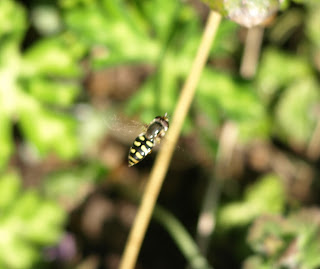 I think these are Syrphus ribesii and Eupeodes corolla  but would welcome any corrections.

The first house martins of the year, and a couple of new plants bring my total to 143.


Posted by Marilyn Abdulla at 9:20 PM