Another twenty new species this past week so I'm pressing on very slowly towards the halfway mark. Everything seems to be gathering pace now we're into my favourite month but as feared earlier in the year, I've got little time to spare now it's full steam ahead with the survey season. I'm monitoring three Pearl-bordered Fritillary re-introduction projects locally (they're still not out yet as I write this but that could all change later today or tomorrow given the fine weather forecast). They're not in this square unfortunately but the captive-breeding has all been done here at the plot (promise I won't tick PBF larva) and our local Abbots Wood colony is now into its ninth year .... and hopefully still going strong despite a mini crash last year (peak count down from 600+ in 2011 to 'just' 200 last May). I've also started on the first round of bird and butterfly surveys on eight private estates in the High Weald in the past week. So although evenings are still free to do the blog, I tend to end up slumping head down on the lap-top after five minutes, especially if, like yesterday morning, I get asked last minute to lead a dawn chorus walk near Bexhill in between all the surveys (that elusive Cetti's Warbler followed us around all the way yesterday morning). Which reminds me, I've formed the Cetti's Club for annoying birds that stop 50-100m short of the square ..... latest recruits include Sedge Warbler, Yellow Wagtail, Stonechat, Peregrine and Barn Owl. I think 100 bird species for this square in a year is still on but it's getting ever more difficult to predict where they're going to come from (as are the next 500+ 1KSQ ticks). Hobby, Swift, Spotted Flycatcher and Sand Martin should be reliable (hopefully soon) but after that it's anybody's guess as to what will turn up. Meanwhile  ...... 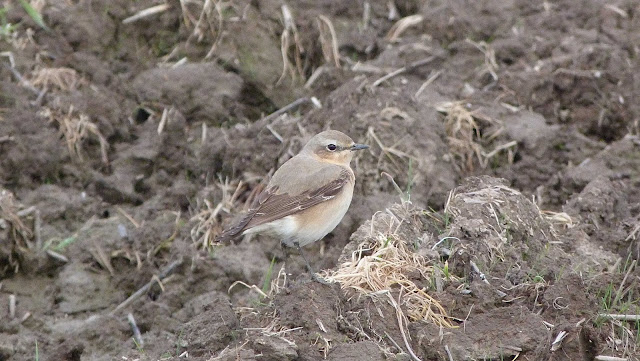 465 - Wheatear (left) 2 females and a male along the arable field edge - SW of Herstmonceux Church
466 - Whinchat - first time I’ve seen Whinchat on spring migration - strangely, it's usually September before I see them. A very smart male was with yet another couple of Wheatears on the edge of the arable field
467 - House Martin - a lone recent arrival hanging around above the farm although there's a nesting colony at the Castle. 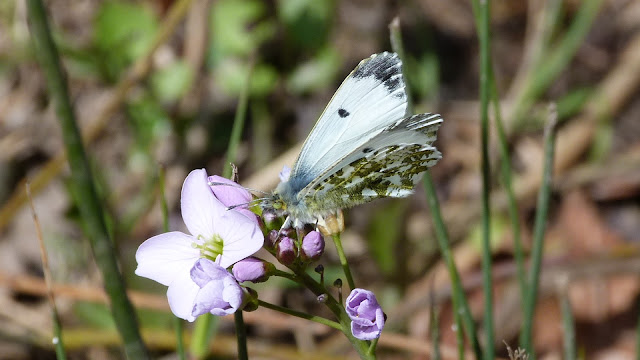 468 - Orange Tip Anthocharis cardamines  .... at last - mid-afternoon on 30th Apr - and in the nick of time otherwise it would have been a (first ever) first sighting in May. This female settled on Lady’s Smock by the little pond. 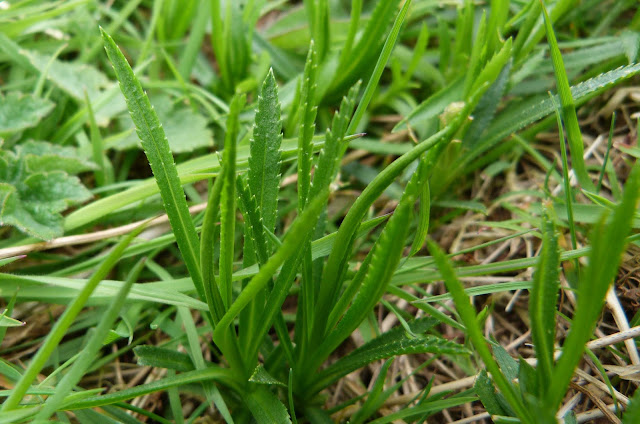 470 - Meadow Cranesbill Geranium pratense  and ….
471 - Sneezewort  Achillea ptarmica (left) both with plenty of leafy growth in the meadow with a big patch of the latter showing well …. one for obscure leaf lovers everywhere.
472 - Wood Forget-me-not Myosotis sylvatica – under brambles in the front meadow …. which used to be a wood.
473 - Horse Chestnut  Aesculus hippocastanum - only 25-20m high and have been on many a 1KSQ forage right underneath it without even noticing it.
474 - Field Maple  Acer campestre  on the edge of the Castle grounds. 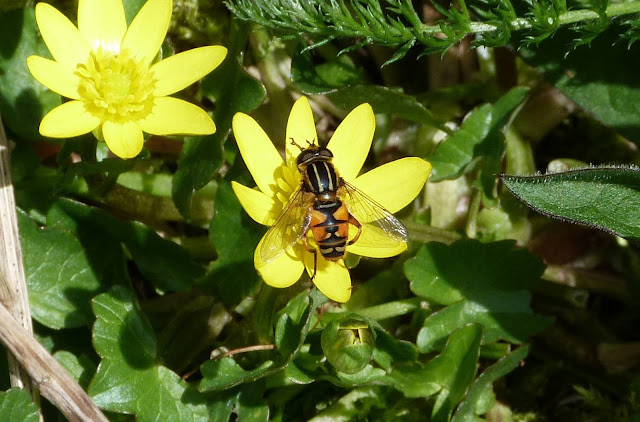 475 - Hoverfly Helophilus pendulus (left) on Lesser Celandine in the front meadow.  Thanks to Seth for help with the ID (via his new Hoverfly book). I found another in Abbots Wood near Hailsham on Friday while on an unsuccessful search for Osmia Pilicornis and Pearl-bordered Fritillaries with the RSPB and FC guys. Lots of other bees, cuckoo bees and bee flies though …. and six species of butterfly. Nice way to spend the day, even better if it had been in TQ6410. 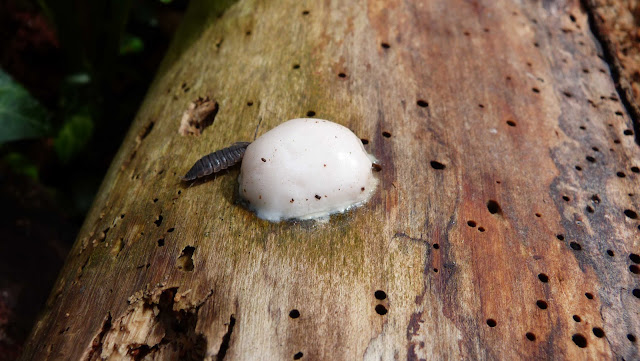 476 - Slime mould Enteridium lycoperdon  a sort of white ‘false puffball’ on a dead tree-trunk. Not come across these before but one like this featured in Lewes Wildlife Trust's recent blog - hopefully the same species
477 - Silverweed Potentilla anserine – the mystery leaf photo’d in the Castle grounds last week.
478 - Common Valerian Valeriana officinalis  leaves now well-established on the edge of the little wildlife pond. 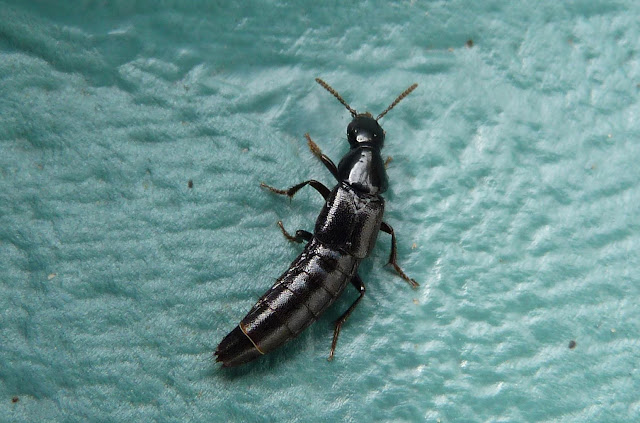 This Rove beetle was in the compost bin last month but I've only tentatively got it down to one of the Philonthus species. I noticed the words 'genitalia' and 'dissection' mentioned somewhere .... but ain't going there .....
At least this next one's a bit easier .....
479 - Devil’s Coach Horse Beetle Staphylinus olens - a pretty frisky, fearsome beast in a rotting old log at the end of the rookery wood. Normally I come across these tiptoe-ing over the concrete floor of the barn or workshop.
480 - Male Fern Dryopteris filix-mas - appearing quite widely in the woods
481 - Meadow Foxtail Alopecurus pratensis - one of the earlier flowering grasses locally after Sweet vernal and Annual meadow grass


482 - Mining Bee andrena nitida - on the front verge dandelions on 1st May. A bit more confident with this one after finding it (and having its ID confirmed) in Abbots Wood on Friday.

483 - Scalloped Hook-tip Falcaria lacertinaria - the only new moth on Saturday night (and all last week) and that was outside the trap. The ones inside were Small Quaker, Common Quaker, Brindled Pug, Early Thorn and Hebrew Character. Several blank nights with the trap recently but a few moths and another Black Sexton Beetle the night before last. 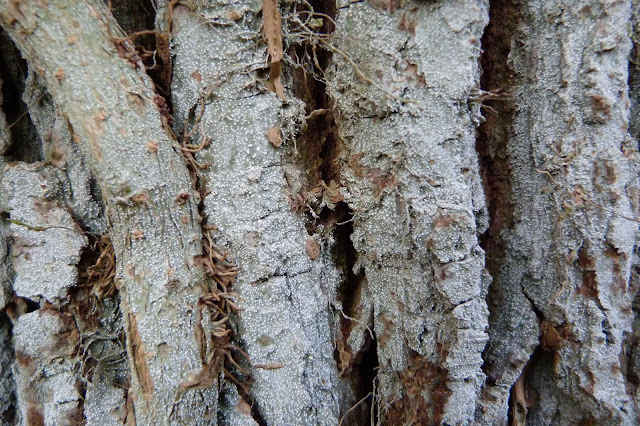 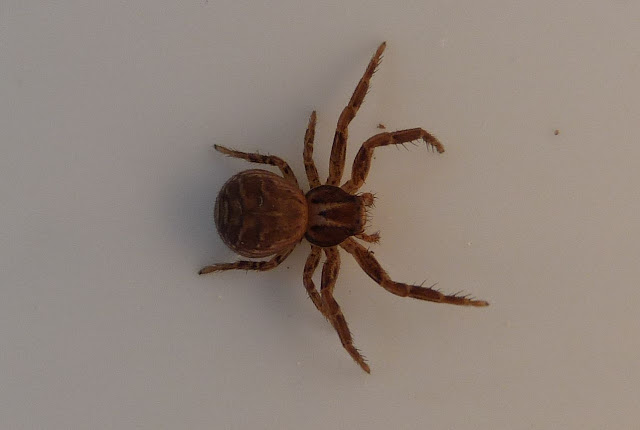 Last but not least .....Crab Spider  Xysticus ulmi or Xysticus cristatus ? Trust me to find a contentious species. Any hints welcome .....

Might just beat the living daylights out of the hawthorns, blackthorns, gorse and sallows around the plot this morning ..... taking my Blogger frustrations out on all the bushes ....
p.s. my first Large Red Damselfly of 2013 out yesterday .... that can go in the Cetti's Club too even though it was in the next square but one .....
Posted by MikeM at 11:14 AM