I've been lurking for a while but as I've reached 7% of the total I think it's time to declare myself. 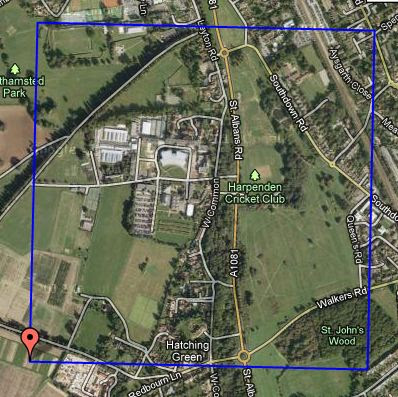 The square is dominated by Rothamsted but there is some woodland, the common, a bit of arable and a couple of ponds so hopefully there will be enough diversity to get me close to the target.

There are also two Rothamsted Light Traps and two Rothamsted Suction Traps (one 40' and one 5') there will be plenty of material in these, some I will be identifying as a matter of course (it's my job) but I wonder whether that would be considered bending the rules just a little too much? I haven't looked at anything yet but I do have a couple of boxes of flies on my desk from the light traps ready to be picked through.

I'm currently on 72 species, mainly through dusting off my weed seedling id skills, highlights so far include one new lichen (Physcia adscendens), and two new bracket fungi (Trametes versicolor and Stereum hirsutum) for my pantaxa list. Undisputed lowlight is Pediculus humanus which comes courtesy of my daughter...
Posted by Chris Shortall at 9:30 AM

Email ThisBlogThis!Share to TwitterShare to FacebookShare to Pinterest
Labels: TL1313