It was probably going to be a doddle, talking me into trying to record 1000 species in a year in TQ6410, especially as it contains my wildlife plot AND Herstmonceux Castle grounds, deep in the East Sussex countryside. My plot/work-base) has been woefully neglected over recent years, not so much through natural re-growth (that's been deliberate to encourage wildlife) but there's been a definite lack of pan-species recording since I first acquired it back in 1993.

I have at least kept plot-lists of birds (83 species – no rarities - by the end of 2012), butterflies (28 species including a wayward Chalkhill Blue in 1996), odenata (10 dragonflies, 3 damselflies) and er .... quite a few macro-moths with 105 species one late-July night in 2009 and 95 on another in 2010. These included Olive Crescent, Toadflax Brocade (larva on Purple Toadflax) and then in early September 2011, a slightly faded Dentated Pug in one of Dave and Pen Green's moth traps (there's Yellow Loosestrife here too). After that, moth nights (and moth records) have become a bit erratic but it could/should be over 200 species now.

Everything else here - fungi and other invertebrates, molluscs, mosses, ferns and lichens are virtually unrecorded …… and often un-recognised by the plot owner! That leaves native plants which I’m OK on as there are a lot here now (but again, not properly documented). I’ve watched them ‘naturalise’ via locally collected seed thrown into grass-banks and meadow areas around the plot since 1993. So to avoid too much controversy, I'm only counting stuff that's survived here ten years or more - which is most of it! These little flowery areas for butterflies and moths, bees and hoverflies and many other invertebrates, are now very well-established with local provenance native perennials from the nearby High Weald and Sussex Downs. 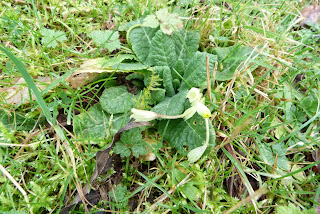 And talking of downs, I'm not visiting the plot so much through the winter months (Dec-Feb incl.) so last Sunday's visit (6th Jan 2013) was my first of the year. The initial species count was: birds (20), native trees/shrubs (20), flora (60) of which – surprise, surprise, Winter Heliotrope (Petasites fragrans) and Sweet Violet (Viola oderata) were the only ones in flower (the rest were reasonably leafy or had some old stems from last summer).

The 100 species first day tally might have been a little higher (with one or two semi-dormant inverts) had I not got hopelessly side-tracked by a wayward Great White Egret over on Down Level (just a few squares away). The law of diminishing returns will set in rapidly now that I’ve jotted down some of the more instantly recognisable flora but that still leaves a daunting spring and summer of unknown inverts to try to identify without a microscope in 2013. And there are loads here!
Jan 11th update:  A late pm wander around the overgrown, brambly upper meadow yesterday in search of a Barn Owl saw a sizeable flock of Jackdaws (Corvus monedula) and Rooks (Corvus frugilegus) fly back to their rookery roost in the little wood next door. No owl this time but in near darkness, three Woodcock (Scolopax rusticola) suddenly flew very low over the plot while a fourth landed somewhere in a clearing just 30m away. They were quickly followed by the hornet-like drone of my first (official) invert as a Dung Beetle (Geotrupes stercorarius) arrived in the gloom, landing right next to my feet alongside some soggy rabbit poo (but no Rabbit).

Not a great pic of said beetle (via Blackberry) but better than nowt in the dark! 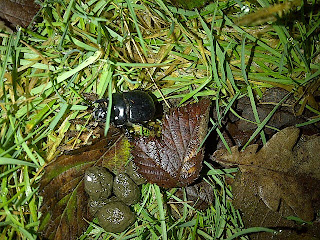 The Blackberry’s not a tick by the way but Bramble (Rubus fruticosus) was the most obvious plant on the plot last Sunday. Back again briefly this afternoon (Fri 11th Jan), I managed to find a Bullfinch (male), Mistle Thrush, Mallard and Teal (the latter pairs low overhead at dusk) and finally Treecreeper when I called in at the badger sets in the little bluebell wood. No badgers out yet though but I did find Wild Privet in there earlier.  Still no Barn Owl but three more Woodcock again flew low over the plot at 5pm in near darkness. I've now temporarily ground to a halt on 136 species although still a couple of fungi to ID .....
Posted by MikeM at 10:48 PM