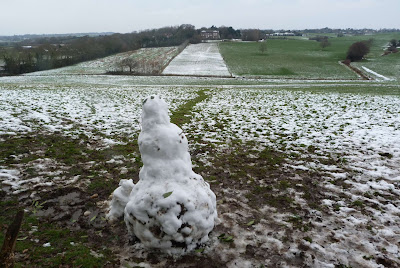 Another visit to my plot yesterday .... where I’ve got a lot of work to do this winter, both here AND back at my temporary base in Ashdown Forest 25 miles away. But the intrigue of the 1KSQ Challenge and the excuse to do some more foraging and go for yet another walk around the Square is getting addictive. It may even need a PUBLIC HEALTH WARNING before too long ….


BIRDS: All very common stuff – Collared Dove, Magpie, Pheasant and er …. Starling (what? almost four weeks into January?). By contrast, a Chiffchaff was a first ever over-wintering bird for me in this square although they’re very common here March-October and nest in bramble patches on my plot. This one was with a Wren by a little drain/stream in the shallow valley next door (centre background above). I’d never visited this ditch before yet it’s only 100m away on open farmland (there was a row of Alders too). I checked it out because Andy’s snipe photo had given me ideas (I’ve seen them here before). I didn't find any yesterday although there were 25-30 Fieldfare feeding on the wet field with the Starlings. A little further on, I flushed four more Woodcock and five Teal from the edge of wet woodland close to Herstmonceux Castle grounds. The bird-list is now up to 41 species (approx. half the all-time plot list) but still missing House Sparrow and quite a few other common ones. 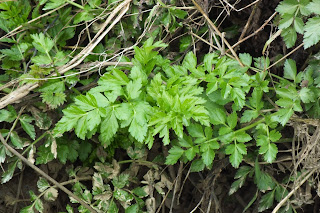 FLORA: Hemlock Water Dropwort (left) all along the Chiffchaff ditch and Marsh Marigold now showing above water level in my wildlife pond. Prickly Sowthistle leafy rosettes abundant in the cattle (Fieldfare) field made it 82 plant species. NOTE: There was an error in my last post re. the Bristly Ox-tongue pic – I’ve inadvertently shown a Teasel …. but no-one’s mentioned it .... yet! 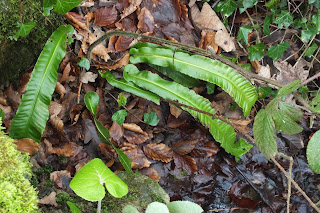 FERNS: An undiscovered Hart’s Tongue in another small ditch right on my plot’s perimeter hedge/boundary …. and also another Yew – this one unseen (for almost twenty years) in the boundary hedge - which I rarely ever look at from the north side! 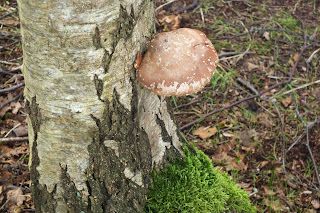 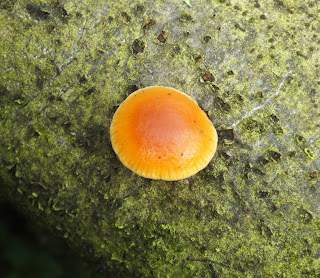 And another which looks as if it could well be a solitary Velvet Shank on a sycamore log but I think these are normally in clusters on dead wood.

I need to find some inverts and maybe get permission to look around the Castle grounds pretty soon!
Posted by MikeM at 8:24 PM